Any incident of violence, protest or attempts to block roads or hamper normal life will be dealt with 'very strictly' 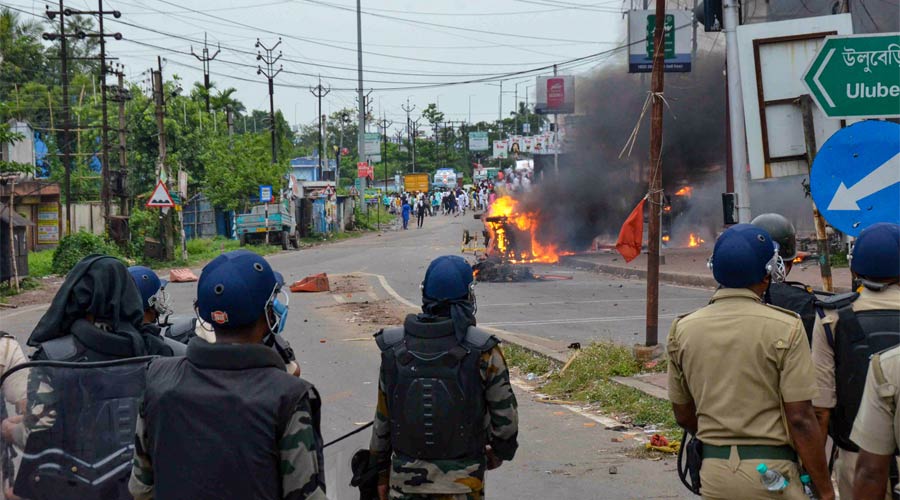 Security personnel try to maintain law and order as a vehicle is allegedly set ablaze by miscreants during a protest over controversial remarks made by two now-suspended BJP leaders about Prophet Mohammad, in Howrah on Friday.
PTI Photo
Our Bureau, PTI   |   Calcutta   |   Published 11.06.22, 12:07 PM

The situation in West Bengal's Howrah district, which on Friday witnessed violent protests against controversial remarks of suspended BJP spokespersons, was peaceful on Saturday morning even as prohibitory orders under Section 144 of CrPc remained imposed and internet services suspended, officials said.

Assembly of five or more people in procession or carrying any dangerous weapon or any act that is likely to cause disturbance to public tranquility and breach of peace is prohibited in Uluberia, Panchla and Jagatballavpur areas and along the railway stations and the national highway in these areas from June 10-15, they said.

Internet services also remained suspended across the district and it will continue till June 13.

"The situation in Howrah district is peaceful. No incident of protest or violence has been reported since Friday night. We have deployed huge police contingents in sensitive areas," a police officer told PTI.

Any incident of violence, protest or attempts to block roads or hamper normal life will be dealt with "very strictly".

"We will not allow anyone to create disturbance in the district and ensure that peace prevails. We are keeping a close watch on the situation," he said.

Vehicular movement on National Highway 16 and train services are normal, while markets and other business establishments are open, the IPS officer said.

"We are taking all precautionary measures and are ready to handle any situation," he said.

Agitators resorted to stone-pelting, setting police vehicles on fire and damaging public property during violent protests and clashes with the police in Howrah district.