Plea for food security in Jharkhand 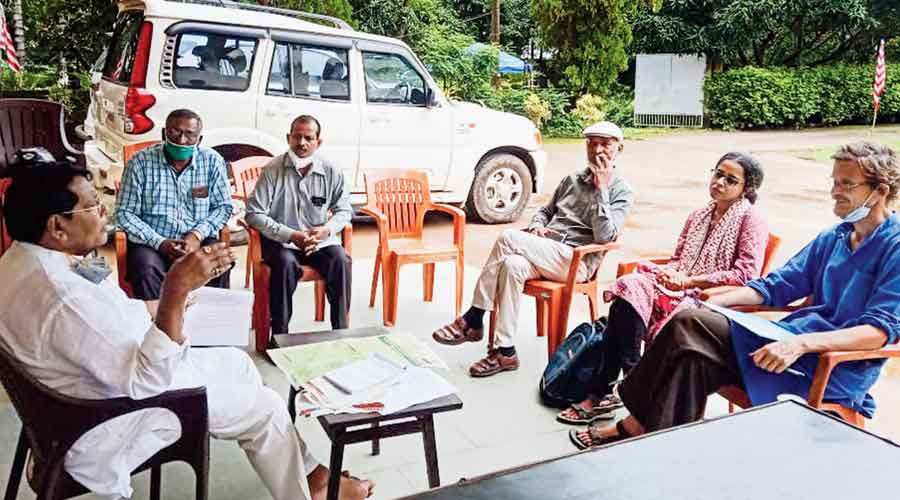 Economist Jean Dreze (extreme right) and others from the Right to Food Campaign during the meeting with Jharkhand food minister Rameshwar Oraon in Ranchi on Wednesday
Manob Chowdhary
Achintya Ganguly   |   Ranchi   |   Published 24.09.20, 01:25 AM

A delegation of the Jharkhand chapter of Right to Food Campaign met food and public distribution minister Rameshwar Oraon here on Wednesday and urged the government to ensure that all eligible persons are covered under the state’s food security scheme.

The delegation also handed over a letter apprising the minister of some related problems.

The state government recently announced expansion of coverage of the public distribution system (PDS) by giving new ration cards to 15 lakh people but the link for online application was not activated though the deadline of September 30 was approaching fast, the letter said.

The delegation included, among others, economist Jean Dreze, state convener of the Right to Food campaign, Asharfi Nand Prasad, and former state adviser to the Supreme Court-appointed committee on food related cases, Balram, who also signed the letter.

About 10 lakh people had already applied for ration cards and were waiting for to get one but it was not clear if they would also be included among the 15 lakh people who would be given the new green, the delegation said.

“The notification inviting online application for new cards by September 30 was issued on September 15 but the application link was not activated even on Tuesday,” Prasad told The Telegraph.

He said Oraon, however, assured that the application link would be activated immediately.

There was also no clarity about the eligibility of persons who could apply for the proposed new cards and the selection process or if such applicants who were waiting for ration cards would also require to apply afresh, he said.

The delegation also told the minister that the 15 lakh new cards would cover about 3 to 3.5 lakh families only as those cards would be issued in the name of individual members of a family and requested Oraon to include all eligible persons.

The deadline of September 30 for applying online was too short and should be extended by another month, the delegation told the minister.

They said some publicity should also be carried out in rural areas so that people know about the green cards and apply for them.

The members of the delegation also requested Oraon to arrange for distribution of pulses, oil and salt through the PDS and not to ask the old applicants to do it again.

They also requested for engaging local teachers to assist rural people in applying online for the green cards.

“The minister welcomed the campaign’s demands and suggestions and also proposed a follow-up meeting with the food secretary within a few days to discuss how to act on those (suggestions),” Dreze said, when asked about the outcome of their meeting.