Outlet for spices and handicrafts products for visitors to Dalma soon 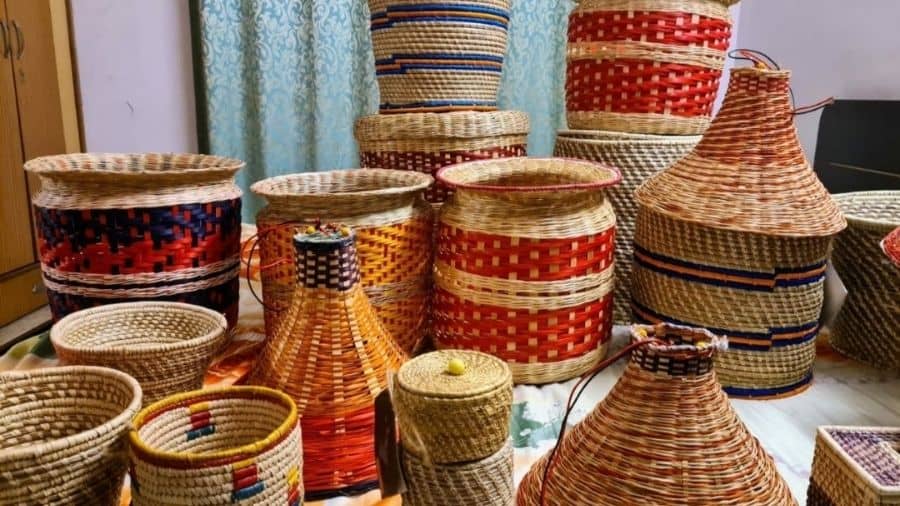 Handicrafts products made by local people to be put up for sale at the proposed outlet in the Dalma gateway
Animesh Sengupta
Kumud Jenamani   |   Jamshedpur   |   Published 17.03.22, 04:44 PM

Those who visit the Dalma hills will soon get opportunity for buying handicrafts, spices and other products made by the villagers in and around the sprawling hills.

A local NGO has on Thursday tied up with Dalma Van Suraksha Samity (DVSS), body set up volunteers for protection of Dalma, following mediation by the Dalma Wildlife Sanctuary authority for enhancing the earning capacity of the local people.

By setting up the outlet, the NGO, Tagore Society for Rural Development (TSRD) would not only provide the villagers a platform for selling their products, but will also give numerous ecotourists an opportunity to have a true impression about the Dalma which is commonly known as a home of wild elephants.

Revealing about the move, Dalma divisional forest officer, Abhishek Kumar said that the proposed outlet will be set up at Makulakocha village situated on the foothills of Dalma after the Holi festival.

"The venture promoted by the TSRD under it's Livelihood Enterprise Development Project (LEDP) will be funded by NABARD.  A memorandum of understanding between the NGO and DVSS has already signed so as to start the project by the end of March," said Kumar while talking to The Telegraph Online.

The Dalma DFO pointed out that there are 16 revenue villagers inside the periphery of Dalma and over two dozens villages located just outside it.

"The main aim behind setting up the outlet is to enhance the source of living of the local people many of whom make a living by producing woods clandestinely from the Dalma hills.

On the other hand providing a platform to those villagers who have expertise of products organic spices, pulses and handicrafts items for making a living, "the senior forest officer.

"Our objective is to bring about quality life for the majority of the villagers by making them involved in manufacturing handicrafts products  and spices instead of being involved in illegal activity of tree-felling, " said Kumar.

Located about 16 km away from the heart of the steel city along the NH-33, Makulakocha is expected to turn into a business hub once the TSRD-sponsored outlet comes up.