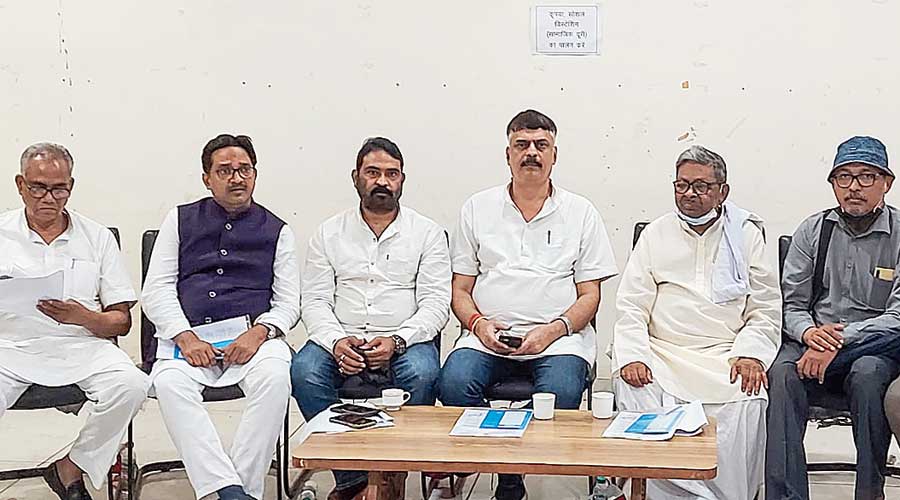 State Congress president Rajesh Thakur (centre) with other leaders at the meeting in Ranchi on Monday.
Manob Chowdhury
Animesh Bisoee   |   Jamshedpur   |   Published 21.09.21, 12:03 AM

Supporters of all non-NDA parties will come out on the streets across Jharkhand to enforce the Bharat Bandh called by the Samyukta Kisan Morcha (SKM) on September 27 to protest against the Centre’s three farm laws.

The farmers’ agitation in Jharkhand had so far seen only Left parties joining hands with the Jharkhand Rajya Kisan Sangarsh Samanvay Samity (an outfit formed last year to coordinate the agitation against farm laws in the state) for enforcing bandhs and staging protests.

“We have decided to come out on the streets to enforce the bandh. The decision was taken at a meeting of all the non-NDA parties, including the JMM, Trinamul Congress, RJD, CPM and the CPI at the Congress state headquarters on Monday. In fact, it had been decided during the meeting of all Opposition parties on August 20 chaired by Sonia Gandhi to join forces against the central government’s oppressive policies,” said state Congress president Rajesh Thakur.

“The farmers’ movement will go beyond 2024 if the (Narendra) Modi government does not repeal the new farm laws. The Jharkhand farmers have decided to extend full support to the bandh call given by farmer outfits in Delhi, Punjab, Haryana and Uttar Pradesh. The bandh would be historic. We welcome the decision of other non-NDA parties to come out in support of the bandh, especially the Congress and JMM as they are the ruling parties in the state,” said Sufal Mahato, state coordinator of the Samity.

State Congress spokesperson Rakesh Sinha said that it was unanimously decided in the meeting to organise a jan jagran (public awareness) campaign against the central government’s “destruction” of the economy.

“All the Opposition (non-NDA) parties will take out a torch rally on September 26 evening as part of a campaign to spread awareness among the masses about the destruction of the country’s economy through wrong policies of the BJP-led central government. This apart we will create awareness against increased attacks on Dalits, Adivasis, minorities and women during the BJP regime. We will also create awareness about the insensitivity of the government towards the farmers’ agitation which has been going on for nine months,” said Sinha.

On September 29, non-NDA parties will stage a dharna against the central government’s policies at all the district headquarters. A dharna will also be staged in front of the Raj Bhavan in Ranchi on the same day.