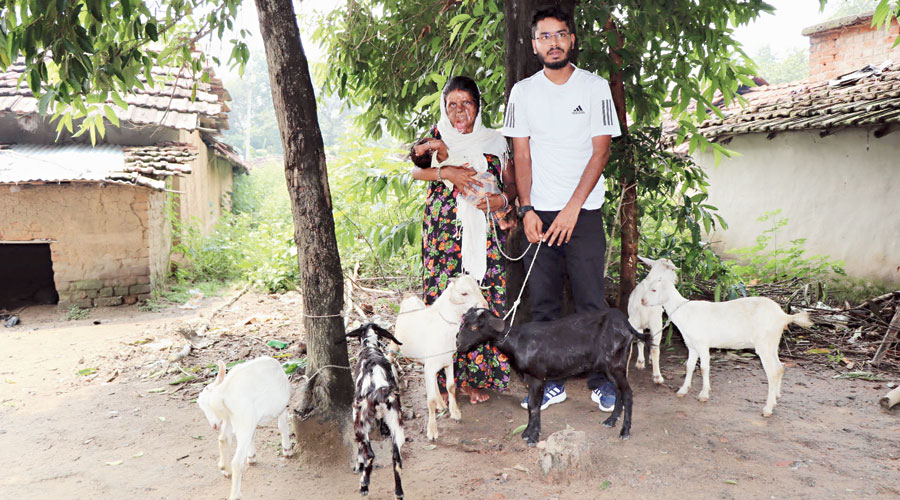 An NGO has launched an initiative to provide a source of livelihood to disabled poor tribal people residing in rural areas of Dhanbad in Jharkhand.

“During distribution of meals to the poor during the lockdown induced by the Covid-19 pandemic since March, we have seen the pathetic condition of tribals who are disabled. We had a talk with our contributors to chalk out a strategy which would be sustainable for the disabled people in the long run instead of distribution of a few ration items and cash

“ After discussion we have decided to contribute goats to such families which would not require any investment and provide them a sustainable livelihood in future. In addition we would distribute a one-time ration kit and Rs 5,000 in cash to tide over the emergency,” said Kumar, a student of Binod Bihari Mahto Koylanchal University.

His NGO has so far distributed 10 lakh meals to the poor in and around Dhanbad during the lockdown.

The NGO gave four goats and a male goat along with ration kits and cash to the beneficiaries on Wednesday.

“We will be giving 5 goats (including the male goat) in the first phase. After a few months, we will provide them another lot of 5 goats after seeing if they are able to rear them well. We have also provided animal insurance for all the goats. The tribals know about goat rearing and since they are of local breed, the animals do not require much maintenance. They can earn income by selling goat milk,” said Kumar.

The beneficiaries included Gajju Mahato, 35, a resident of Topchanchi in Dhanbad who suffers from paralysis in his right hand and leg due to polio while his wife has lost vision in one eye.

The other beneficiary was 27-year-old Lakhi Munni from Sindurpur in Baliapur block of Dhanbad, who suffers from vision impairment sustained during a fire mishap in which her face was burnt.

The NGO plans to select more such beneficiaries in the near future.

“We would be searching for more such poor tribal people who have disabilities of any form and are residing in rural parts of Dhanbad and provide benefits under this project. We have plans to help 100 such people in the near future,” said Kumar.

His NGO has also provided two truckloads of edible items for flood victims in Bihar and also runs several playschools for poor children in Dhanbad.