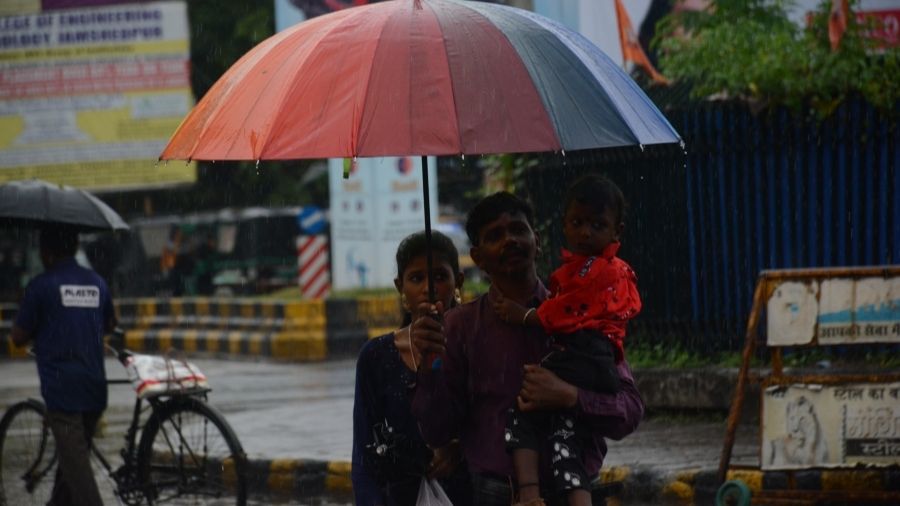 A family takes out umbrellas after being caught in sudden rain in Jamshedpur on Thursday.
Picture by Bhola Prasad
Pinaki Majumdar   |   Jamshdepur   |   Published 14.10.21, 03:36 PM

Several parts of Jharkhand experienced rain accompanied by thunder on Thursday due to the impact of a low-pressure  system over the Bay of Bengal coupled with a cyclonic circulation.

IMD's Ranchi Meteorological Centre had earlier warned of rain on Navami and Dashami (Thursday and Friday ) due to the influence of the low- pressure.

The low-pressure area was lying over northern parts of central
Bay of Bengal  and an  associated cyclonic circulation  was extending upto 5.8 km above the mean
sea level.

Head of Ranchi Meteorological Centre Abhishek Anand said, " The low- pressure is likely to move northwestwards and reach
south Odisha and north Andhra Pradesh coasts during the next 24 hours."

The forecast for Friday, Dashami (October 15 ), says generally cloudy sky with light to moderate rain or thundershowers  at a few places over central, north-eastern and southern parts of Jharkhand. Light rain with moderate thunderstorm and lightning is also expected at isolated places on Saturday and Sunday.

The intermittent rain in Jamshedpur and several other parts of the state played spoilsport as people preferred to stay indoors on Navami.

A duty officer at IMD's  Regional Meteorological Centre at Alipore in Calcutta corroborated the forecast of Ranchi Met Centre. “ Various weather models suggest rainfall activity in  Jharkhand during the next two to three days due to the impact of the low-pressure and the cyclonic circulation," he said over phone from Calcutta.

He went on to say that monsoon had already withdrawn from Jharkhand and most states but the prevailing low- pressure over the Bay of Bengal was triggering rains.