Maoists gun down coal trader at Chhath ghat in Chatra 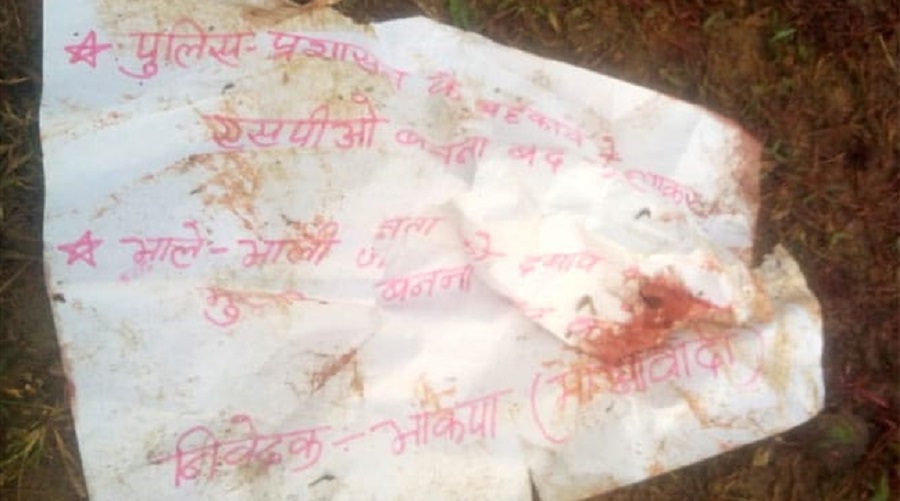 A CPI(Maoist) poster recovered from Chhath Ghat in Simarya, where a coal trader was shot dead on Saturday morning during Arghya ritual.
Sourced by the correspondent
Our Correspondent   |   Ranchi   |   Published 21.11.20, 03:52 PM

CPI (Maoist) insurgents shot dead a coal trader while he was offering Chhath prayers at a ghat in a nondescript village of Chatra’s Simariya block, about 150 km north of capital Ranchi, on Saturday morning, triggering panic among villagers on the last day of the festival.

Eyewitnesses claimed that bike-borne, masked rebels fired three rounds of from a close distance at the coal trader and fled shouting slogans glorifying their organisation. The incident led to a stampede at the Chhath Ghat. Police recovered three used cartridges and two CPI (Maoist) posters from the spot.

The victim, identified as one Mukesh Giri, was rushed to a local hospital in Simarya from where he was referred to Rajendra Institute of Medical Sciences (RIMS) in Ranchi. Giri succumbed to his injuries on way to Ranchi in an ambulance, police said.

The rebels went on a rampage on Saturday in other districts too. In Giridih, they unleased violence and pasted posters in Khunti and Saraikela. Through the posters, the rebels threatened industrialists to either pay levy or perish. A poster recovered from the crime scene in Chatra warned local residents against becoming police informers and threatened them of dire consequences if they passed on information to law enforcement agencies.

In Giridih, CPI (Maoist) rebels set ablaze a JCB, a bike, a miller machine and a generator at a road construction site on Saturday, police said. They also set afire to a house where construction workers were staying temporarily. However, no casualties were reported.

DGP M.V. Rao rushed to Chatra after the coal trader’s murder and held a meeting with the Chatra SP Rishav Kumar Jha. Talking to the media later, the DGP said that CPI (Maoist) rebels had invited their own demise by indulging in such activities and they won’t be able to survive for long.

“They have lost the ideological support of villagers. Their (Maoists) end is not far,” said Rao.

While the purpose behind the cold-blooded murder in broad daylight is not confirmed, police suspect the coal trader may have been murdered for refusing to pay a levy to the insurgents. Other sources in the police department said that the CPI (Maoist) killed Giri as they suspected him to be a police informer.

As per records with the ministry of home affairs (MHA), at least 19 of 24 districts are Left Wing Extremism affected in Jharkhand. The CPI (Maoist) is the most dreaded outlawed group in the state among around 17 LWE outfits, say police.

Opposition parties in Jharkhand, including the BJP, have been targeting the Hemant Soren-led UPA government in the state over the deteriorating law and order situation. The government has faced the ire of Opposition leaders over rise in crimes against women and lynching incidents lately.