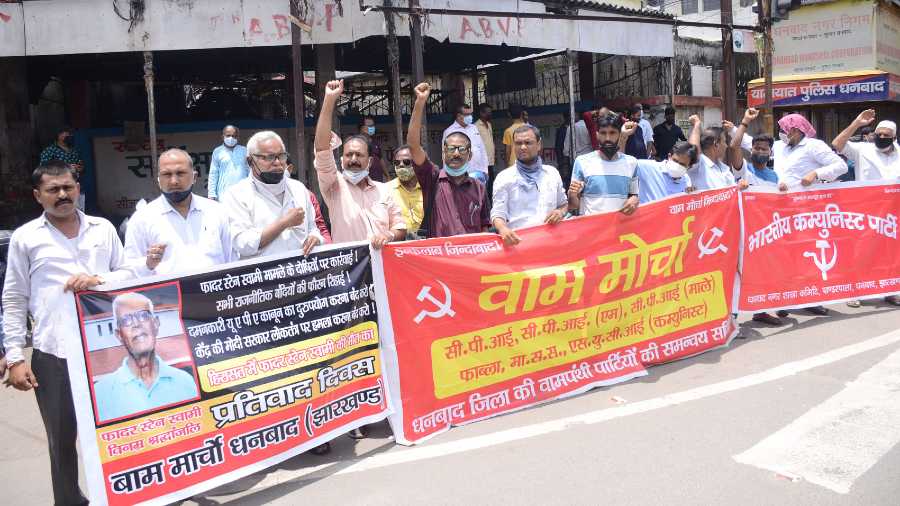 Over 50 activists affiliated to different Left Parties in Jharkhand staged a massive demonstration at Dhanbad’s Randhir Verma Chowk, near the district headquarters demanding a high level probe into the death of the Jesuit priest and tribal right activist, Stan Swamy.

The demonstrators were led by Hari Prasad Pappu, district president of Marxist Coordination Committee (MCC). They were seen holding banners and posters. They also raised slogans against the central government while demanding the immediate release of all political prisoners lodged at different jails across the country.

The agitators accused the central government of misusing Unlawful Activities (Prevention) Act (UAPA) to target activists fighting for the rights of the underprivileged, oppressed and the marginalized.

The hour-long demonstration which began at around 11am and continued till around 12 noon witnessed active participation from leaders of different Left Parties including CPI, CPI (M), CPI (ML), MCC, Forward Bloc and Socialist Unity Centre of India (Communist).

Talking to The Telegraph Online at the demonstration site, Pappu, said, “This demonstration was part of the nationwide protest - Pratiwad Diwas (Potest Day) which has been called by the Left Parties to raise voice against the death of the octogenarian activist, Stan Swamy who had been implicated in the Bhima Koregaon violence case of 2012, as part of conspiracy”

“He was subjected to atrocities during his jail term and put in Corona Ward. He was even denied the basic medical facilities despite his ill health and that eventually led to his death,” added Pappu.

Echoing similar sentiments, Suresh Prasad Gupta, district secretary of CPI (M) Suresh Prasad Gupta said, “The 84-year-old activist was at no fault other than working among the tribal, oppressed, marginalized, deprived by visiting in the remote villages of Jharkhand. He has been victimized as part of a political conspiracy through the misuse of UAPA leading to his death.”

“His death in judicial custody is an attempt to gag the voice of ground level activists working for the poor,” further added Suresh Gupta. He maintained that the activist’s death would not go in vain and would rather spark off a nationwide protest compelling the government to respond on the misuse of UAPA to victimize its opponents.

Feroz Raza, town president of CPI said “Stan Swamy’s death in not a natural death but rather a murder which needs to investigated and culprits must be booked.”