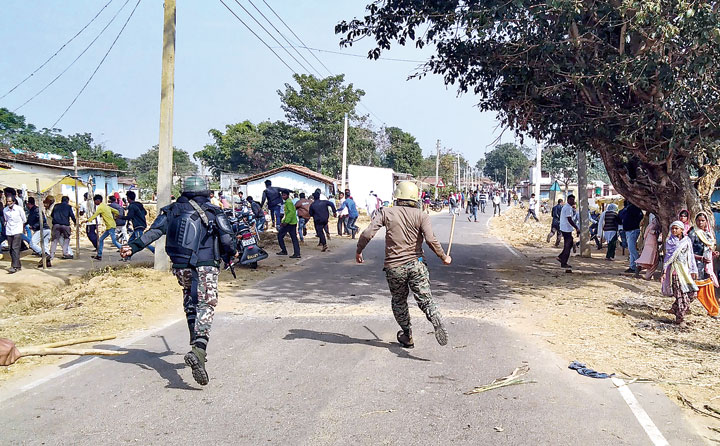 Jharkhand Police, in a news release on Sunday evening, stated Jilani died of wounds from a sharp object and not a bullet.

It was earlier said that Ansari died due to a bullet after cops of Rapid Action Force (RAF) opened fire in self-defence on a mob that pelted stones at the police and tried to snatch their weapons.

A highly placed police officer in Gumla, who did not want to come on record, explained to The Telegraph that the wound on Jilani’s body was “not clean like the one made by a bullet”. “It looks like Jilani died of stab wounds made from a long knife and not a bullet,” he said.

He added that the post-mortem would be released on Monday. “But the doctors have drawn their conclusions from the jagged nature of the wounds on his stomach,” the police officer stressed. “In fact, a part of the intestine has come out. It is a messy wound.”

A team of three doctors headed by Dr Sunil Kisku of Gumla Sadar hospital conducted the post-mortem on Jilani’s body on Saturday after which it was handed over to the family. The policeman added that the victim was likely to have been stabbed by someone in the crowd.

Tension erupted on Saturday morning following altercation between two warring groups at booth 36 of the seat where polling was underway. Voters and supporters of various political parties had started creating a ruckus when the police intervened to pacify them and warned them to not to disturb polling. The mob attacked the police with stones, some people tried to snatch weapons, police said, justifying why the forces opened fire. In the clash, another youth Ashfaq Ansari suffered a bullet injury on his leg.

The Election Commission of India has ordered re-polling at booth 36 where polling was suspended following the violent clash.

The re-polling at the booth located at Urdu Upgraded Middle School at Baghni village in Sisai will now be held between 7am and 3 pm on Monday.

Gumla SP Anjani Kumar Jha said two FIRs had been lodged. “The first was filed by the booth’s presiding officer against unidentified persons for disturbing the poll process and attacking the polling party and security forces under Section 307 and other relevant sections of IPC. The second FIR was lodged by Roshni Khatoon; wife of the deceased Jilani against RAF cops,” said Jha.