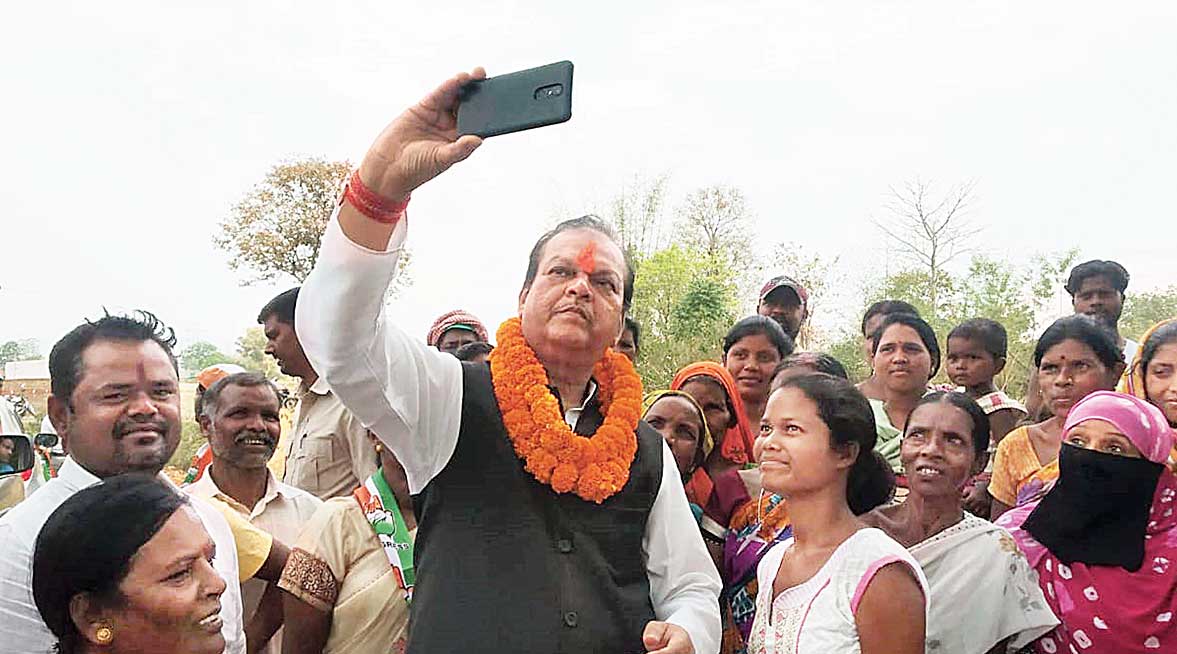 The BJP fielded state khadi board chairman Sanjay Seth for the Ranchi parliamentary seat on Saturday, but the Opposition Congress feels the delayed announcement has given mahagathbandhan candidate Subodh Kant Sahay an advantage in the way he has already hit the road to interact with people in the constituency of over 16 lakh voters.

Sources close to the 67-year-old, three-time Congress MP, a former Union minister in the UPA government, said that so far Sahay and his team had held mass contact programmes in four of six Assembly segments, namely, Silli, Khijri, Ichagarh and Kanke Assembly segments.

“The focus now is on holding meetings in rural areas at the panchayat level and talking about the agrarian distress caused by the policies of NDA government at the Centre. We will move to urban areas soon,” said a Congress leader who looks after Sahay’s itinerary.

“On Saturday, Sahay was in Ormanjhi block (under Khijri Assembly segment),” said the leader.

Ranchi parliamentary constituency has six Assembly segments, namely, Ichagarh, Silli, Khijri, Ranchi, Hatia and Kanke. Voting has been scheduled for May 6 and nominations open from April 12.

The BJP’s central committee announced Seth’s candidature on Saturday afternoon, the delay, party sources admitted, was due to last-minute indecisions centred around sitting MP, Ram Tahal Choudhary (77), who first threatened, and now seems to have decided, to contest as an Independent after realising that he would not be fielded by the party for the sixth time.

However, the BJP will stick with sitting MP Sunil Singh for Chatra and field Annapurna Devi, who left Lalu Yadav’s RJD to join the party, from the Koderma parliamentary constituency.

Sahay on the other hand has been able to instil a sense of confidence among the Opposition alliance partners.

“Subodhji made his intentions clear when he went to seek the blessings of JMM supremo Shibu Soren and his son, JMM’s executive president Hemant, earlier this month. He also met JVM leaders and workers of the constituency at Dibdih and discussed poll strategy while seeking their support,” said Congress spokesman Kishore Sahdeo, who believes that the efforts to reach out to alliance partners would help him earn their respect and support.

“He might be ageing but he has his own personal support base, especially in urban and rural areas, which will harm the BJP in a close tussle. This was evident when hundreds of Choudhary’s supporters protested in front of the state party headquarters last month,” admitted a BJP leader.

Choudhary and Sahay have been age-old rivals in Ranchi. Chaudhary first won from Ranchi in 1991 and retained the seat till 2004, before losing to Sahay for two terms. In 2014, Choudhary had defeated him by 1.99 lakh votes.

BJP state general secretary Deepak Prakash, however, refuted assertions that the delay in announcing their candidate would impact the results.

“We announced candidates for Ranchi, Koderma and Chatra on Saturday. Yes, a little late. But it will hardly have any impact as people are well aware of the achievements of our party both at the Centre and the state, and the opportunistic nature of the Opposition alliance,” Prakash said.