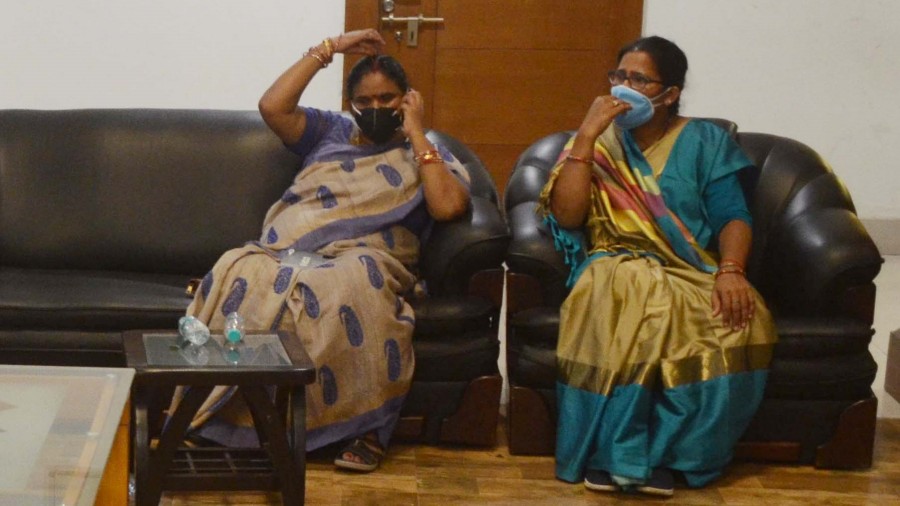 The JDU has alleged that action was taken against RJD MLA Samta Devi under Covid protocols in Ranchi as she was a Dalit whereas Tej Pratap, who, like her,  had also met his father and the RJD chief Lalu Prasad days ago, was let off without being subjected to 14-day quarantine.

Ruling JD(U) and the new entrant to the NDA-fold, Hindustani Awam Morcha (HAM) of former chief minister Jitan Ram Manjhi, attacked RJD for "using its influence" on the JMM-led coalition government in Jharkhand to "punish" a Dalit woman MLA while Tej Pratap visiting Ranchi to meet Lalu Prasad at Rajendra Institute of Medical Sciences (RIMS) did not invite such action.

The RJD has dismissed the charges, saying the NDA leaders appear to be "haunted" by Lalu Prasad day and night.

Samta Devi, RJD MLA from Barachatti (reserved) seat in Bihar's Gaya district, along with one of her associates and two security guards were quarantined by the Ranchi administration on Wednesday after they visited Lalu at RIMS.

The order to quarantine the legislator was passed by additional district magistrate, law and order, Akhilesh Kumar Sinha.

Officials said that the RJD MLA reached Ranchi by road without informing the authorities. When the authorities came to know about her visit from the government guest house, she was quarantined there for 14 days as per the COVID-19 protocols in the state.

Samta Devi told PTI she was unaware of the quarantine norms in place, and had urged the Jharkhand government to release her from isolation and allow her to go back home.

The incident stirred the political pot in Bihar where elections are due in October-November.

Bihar's minister for Information and Public Relations Department Neeraj Kumar asked RJD leader Tejashwi Yadav to speak as "why the Jharkhand government under the influence of his party is adopting double standards in dealing with Samta Devi and Tej Pratap Yadav.

"Has she been punished because she is a Dalit woman?" the JD(U) leader asked the RJD leader in a statement in Patna.

Manjhi who had quit Grand Alliance led by RJD on August 20,  announced on Wednesday that his party was joining NDA in Bihar as a constituent.

RJD spokesperson Mrityunjay Tiwari brushed aside the charges and said the law was taking its course in the neighbouring state without discriminating against anybody.

"Lalu jee seems to be haunting NDA leaders day and night,” Tiwari said. Since they have nothing to show for by way of work to the voters, they are levelling baseless allegations," he said.

Bihar Deputy Chief Minister Sushil Kumar Modi has also accused the RJD supremo of running his political show from behind the bars and even receiving biodata of over 200 ticket aspirants for the state assembly polls.

"If the Jharkhand government is helping Lalu to run the party and allowing him to play a political role while violating the jail manual, we will seek the Election Commission's intervention," the senior Bihar BJP leader had said in a series of tweets last Friday.

The RJD is a part of the JMM-led coalition government in Jharkhand. Congress is also a member.

Lalu Prasad is serving jail time after his conviction in four fodder scam cases. He was shifted to RIMS because of medical issues and then moved to the director’s bungalow to ensure he did not contract a coronavirus infection.