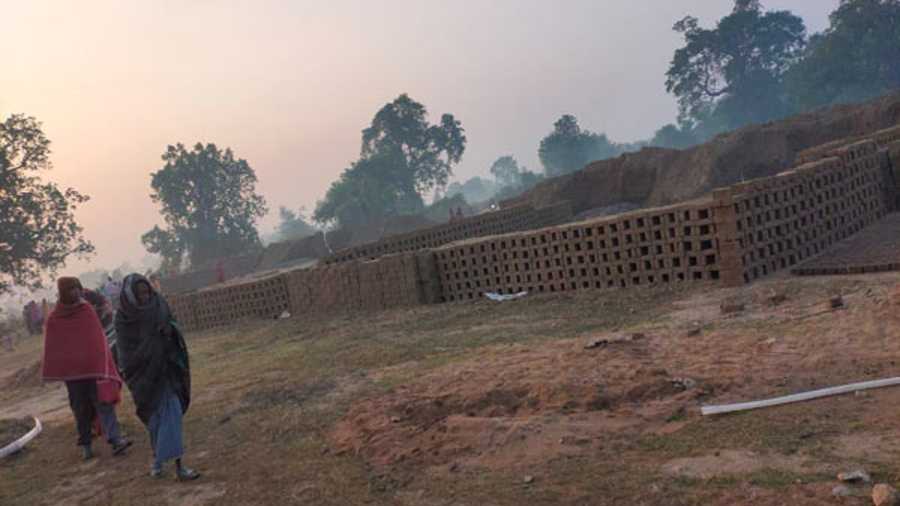 According to sources the herd attacked the house of Rambriksh Ram Mahto(45). Mahto's wife Rohini(40), his son Mukesh Kumar(12) and daughter Sundari Kumari(19) were trampled to death. Ram suffered grievous injuries and has been admitted to Hazaribagh Medical College and Hospital.

After this killing spree, the herd went on a rampage here damaging a series of houses and crops in the adjoining fields. The forest department failed to take any immediate action in this regard, alleged the residents.

The news of three deaths made divisional forest officer(wildlife) Ravindra Nath Mishra send range officer Chotelal Shah to spot, who assured compensation to those affected by the rampage.

The damaged stretch of Grand Trunk Road near Barwadda-Govindpur in Dhanbad.

Dhanbad: The historic grand trunk road’s (National Highway 2) stretch between Barwaddah and Maithon check post is in a bad shape for the past five years, as the contractors had left the six-lane work mid-way. However, the work is soon going to be resumed, as a fresh tender for the incomplete project has been issued by Barwa Adda Express Limited, the concessionaire for the National Highway Authority of India..

Welcoming the development, Sharad Dudani, a local Dhanbad trader and the president of Govindpur Nagrik Samiti said, “We welcome the move. The resumption of the pending 6 lane work will definitely be beneficial for us. The divider and railings are lying broken at several places including at Govindpur, Nirsa, Barwa Adda  and Maithon, while the signage and other indicators are also in a bad shape.”

He further added, “We raised the issue of pending work with both the local administration and central government. We met Nitin Gadkari, the Union  Minister of Road Transport  and  Highways,” said Dudani.

Balram Sao, added, “The pending work has greatly affected the normal traffic on the national highway in Govindpur.”

Family of 3 suffocated to death

Hazaribagh: A couple and their six-year-old son died of suffocation in their newly built house in Romi area of town. Rinku Khan(35), his wife Nikhat Perween and son Ahmad. Nikhat’s brother Iftekhar Khan alias Vicky Khan, a resident of Dhanbad was the only survivor.

According to sources, Rinku, an affluent businessman, had hosted a housewarming party yesterday at his new residence, where he, his wife, son and Vicky stayed back for an overnight stay.

They light a bonfire in the room to beat the chill. But the accumulation of carbon monoxide inside the room suffocated the family of three to death.

The neighbours alerted the police when they couldn’t spot the family in the morning hours. Following which the police broke the door, took out the dead bodies and for autopsy, which confirmed that it was a case of carbon monoxide poisoning.