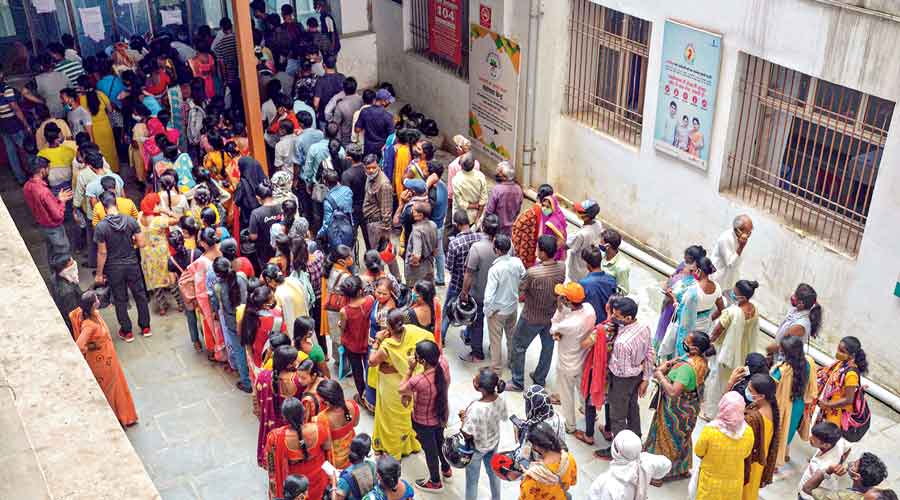 The Jharkhand government will conduct Covid-19 test on passengers reaching the state by train from other states that have high positivity rate.

It also decided to quarantine all police and paramilitary personnel who would be coming from other states for joining duties in Jharkhand or will return after availing leave.

Despite the Covid situation looking under control in Jharkhand, the government did not want to take risk and preferred these precautionary measures for checking the spread of the disease.

Arun Kumar Singh, additional chief secretary (health), wrote letters to the state’s director-general of police (DGP) and also deputy commissioners of some districts, highlighting the necessity of such precautionary measures.

In his letter addressed to the deputy commissioners of Ranchi, Ramgarh, Bokaro, Dhanbad, Deoghar, East Singhbhum and West Singhbhum districts, Singh directed them to monitor arrival of trains from Kerala, Maharashtra and Madhya Pradesh and conduct Covid-19 tests on those disembarking at stations within those districts.

Informing that it was necessary to do so for containing spread of infection, Singh also pointed out that “positivity rate in those states were much higher” and “Delta plus mutant strain was also found in some districts of those states”.

Singh also requested the DGP to put all police and paramilitary personnel, arriving in the state and reporting for duty after availing leave, under quarantine for a week and also to hospitalise those who would be found Covid-19 positive.

“Such measures are welcome,” commented Dr Prabhat Kumar, head of the Covid-19 task force at Ranchi’s Rajendra Institute of Medical Sciences, adding the number of positive cases, though not looking alarming at present, was increasing slowly.

There were only 221 active Covid-19 patients in Jharkhand at 9pm on Saturday. Though 37 new positive cases were found that day, 14 of the total 24 districts of the state had no new infection while 42 patients recovered and no Covid-19 death was reported that day. With nine new infections, Ranchi district had the maximum new cases in the state on Saturday followed by Bokaro (7), Deoghar (5), Dhanbad (4), and West Singhbhum (3).

While Ranchi district had maximum active case load of 61 on Saturday, Palamau and Dumka districts, with not a single active case, became Covid free that day.

“The number of new cases that was just two in Ranchi on August 1 increased to nine in a week,” Dr Kumar said, adding strict monitoring of outsiders reaching the state and increased testing would help buy time for more immunisation and thereby contain spread of the disease.

The state had, till Saturday, administered 1,00,99,082 doses of Covid-19 vaccine, giving at least one dose to around 30 per cent of state’s population and both the doses to about six per cent.