The party had organised the first rally in Santhal Pargana on Jan. 31 when party supporters and farmers moved from Godda to Deoghar with about 200 vehicles 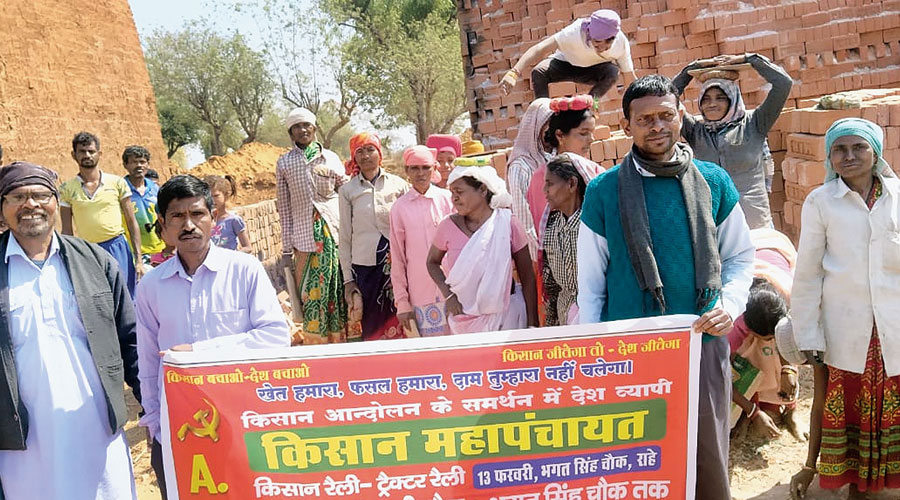 Members of farmers’ outfits create awareness on the kisan mahapanchayat at Rahe near Ranchi on Friday.
Picture by Bhola Prasad
Achintya Ganguly   |   Ranchi   |   Published 16.02.21, 12:31 AM

The Jharkhand unit of the Congress is gearing up for holding another tractor rally, this time in Hazaribagh on February 20, for expressing solidarity with protesting farmers and demanding withdrawal of the farm laws.

The party had organised the first rally in Santhal Pargana on January 31 when party supporters along with farmers moved from Godda to Deoghar, a distance of about 80 km, with about 200 tractors, mobilising public opinion against the farm laws.

If the first really was focused mainly on the northern part of the state, this one will concentrate mainly on the southern part, informed party sources, adding the leaders were already travelling in the districts for mobilising support for making the proposed rally successful.

The party is planning to hold a massive rally in Hazaribagh that day after farmers and supporters converge there from various districts.

“We are also simultaneously holding meetings in the districts for enrolment of new members,” informed Congress’ state spokesperson Alok Dubey, adding they wanted to induct people from various sections of the society into the party.

They had already held march at block headquarters across the state on Saturday, he further informed,  adding a bike rally was also brought out in Hazaribagh that day.

Patralekh, who worked hard to make the earlier rally in Santhal Pargana successful, was now touring Ramgarh-Hazaribagh-Koderma belt for garnering support for the proposed rally in Hazaribagh.

Congress state unit chief Rameshwar Oraon who is also the state’s finance and food minister is also touring the districts. Besides addressing meetings meant for membership drive, he is also mobilising support for the rally.

Oraon was in Lohardaga on Sunday, reached Latehar on Monday and will go to Hazaribagh on Tuesday, Dubey who was accompanying him informed from Latehar.

Many party leaders had earlier said they would continue their protest against the farm laws until those are scrapped.