Deepika Pandey Singh pour muddy water all over her, vows to not budge unless the condition of NH133 in Godda district is improved 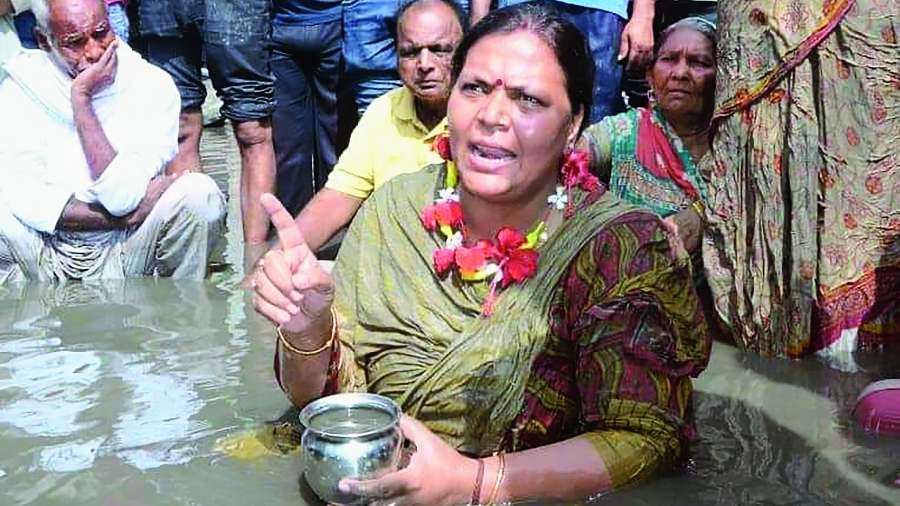 A Congress MLA from Jharkhand, part of the JMM-Congress-RJD alliance government in the state, stood in a pool of muddy water accumulated on a pothole-laden stretch of NH133 in Godda district for nearly two hours on Wednesday protesting against deplorable condition of the highway.

Congress Mahagama MLA Deepika Pandey Singh accompanied with some of her supporters stood on the over knee deep water on the NH133 stretch (linking Godda in Jharkhand with Bhagalpur in Bihar) near Sidhu Kanhu Chowk in Meherma block, around 55 km from Godda district headquarter and 390km from state’s capital Ranchi.

Singh also poured muddy water all over her, and vowed that she would not budge unless repair efforts are undertaken to fill up the “large potholes”. “I don’t want to get involved in the fight between the state government and the Centre…. This is NH133 and the authorities had taken the responsibility to widen this stretch in May 2022, but the Centre did  not provide funds for repair of this highway. Under the given circumstances, I would request the chief minister to get it done as people are facing hardships. I would not get out till I receive an assurance from the Union ministry,” she said.

She also criticised three times Godda MP Nishikant Dubey in a tweet, contending “public representatives can understand the plight of people if they come and sit here”. In response, Dubey took to Twitter and said: “The Congress MLA from Mahagama is sitting on a dharna against Chief Minister Hemant Soren... This highway is maintained by the Road Construction Department and the Centre has already allocated Rs 75 crore six months back for it.”

The MLA, however, refuted the BJP MP claims and alleged that the central government has not provided any funds for its repair work.

“It’s a blatant lie what Dubey is saying; the Centre has not allocated any money,” she said.

The protest was lifted later in the day at around noon after SDO Mahagama Sourav Kumar Bhuvania assured of immediate start of taking out water from the potholes.

“The NH-133 stretch where the protest took place is maintained by NHAI Bhagalpur division and in my knowledge they were supposed to start the construction and repair work. I would be in position to comment in detail after getting in touch with NHAI officials in Bhagalpur. However, to ease the problems of the locals we have started removing water and doing temporary filling of potholes,” said Qamar.