State bans bursting of firecrackers in public during Diwali

Separate guidelines to be issued for private celebrations, Kali Puja allowed but no visitors at pandals 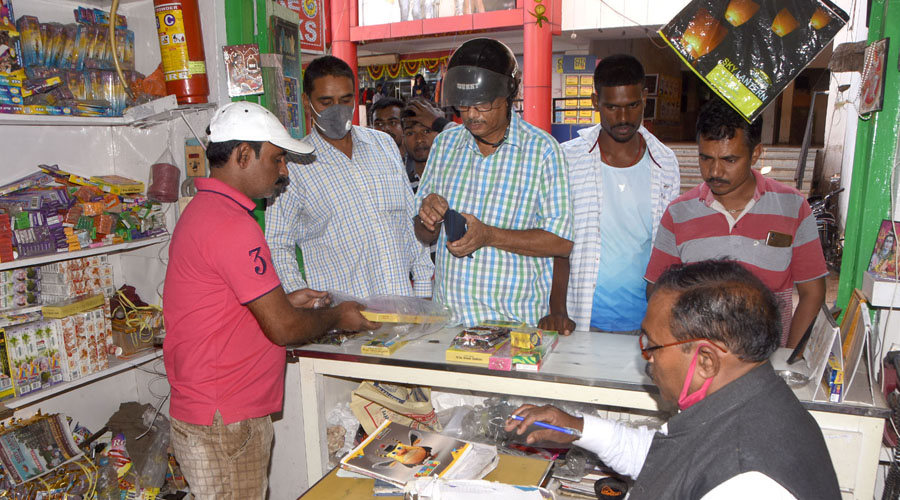 Residents of Dhanbad buying crackers for Diwali from a shop at Park Market in Hirapur before the announcement of the ban on Tuesday.
Picture By - Gautam Dey
Our Correspondent   |   Ranchi   |   Published 10.11.20, 05:50 PM

The directive, issued by the Home, Prison & Disaster Management Department, comes close on the heels of an NGT order which prohibited bursting of firecrackers until November 30 in highly polluted cities, including Jharkhand’s Dhanbad.

The Jharkhand notification permitted Kali Puja in pandals and temples across the state but prohibited the entry of visitors.

“Kali Puja pandals shall be barricaded on all the sides in a way to prevent the entry of public. Only organisers up to a maximum strength of 15 are permitted inside the barricaded pandal,” the notification, signed by chief secretary Sukhdeo Singh, stated.

The government turned down the various Kali Puja committees’ demand to allow lighting and decoration at pandals. In the notification, it stated that there should be no decoration or lighting at and around the pandals. Besides, no welcome gates should be erected. Kali Puja committees had also sought permission for distributing bhog, but the government decided against it to curb the spread of the coronavirus.

As per the government notification, puja committees have been prohibited from taking out processions during immersion of idols. Also, immersions have to be done at places approved by respective district administrations.

The ban on bursting firecrackers in public places comes at a time when Dhanbad, Sindri, Jamshedpur, Saraikela Kharsawan, Ranchi and Barajamda have been found to have higher air pollution levels than the upper limit set by the union Ministry of Environment, Forest and Climatic Change, as per a report by Greenpeace India. However, only Dhanbad was added in the National Clean Air Programme (NCAP) as a non-attainment city, the report stated.

Jharkhand has reported fewer Covid-19 cases than the states like Delhi and Rajasthan. However, the Covid-19 caseload in Jharkhand is above 1 lakh and the number of active cases is down at 4,251, as per data with the health department.