Advertisement
Home / Jharkhand / Jharkhand Assembly: Day One of 5-day monsoon session over in half hour

Jharkhand Assembly: Day One of 5-day monsoon session over in half hour 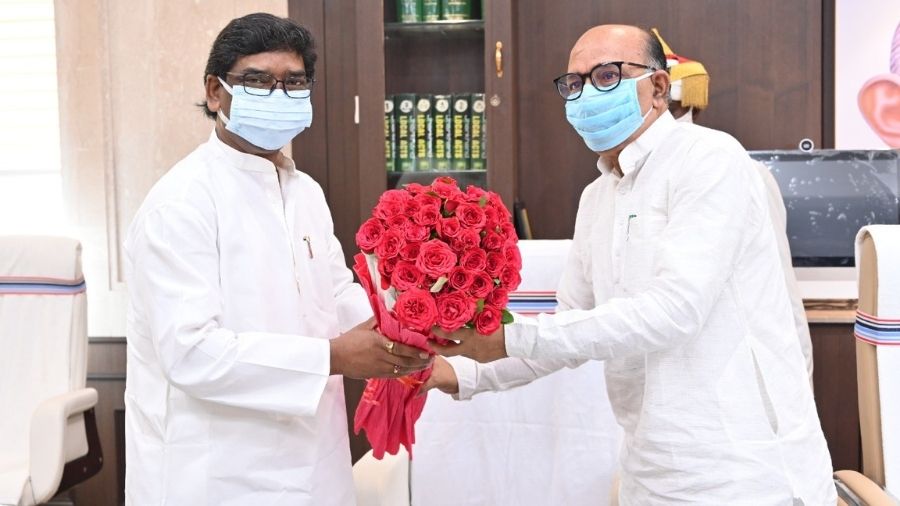 Chief minister Hemant Soren greets Speaker Rabindranath Mahto with a bouquet before the start of the monsoon session of the Assembly in Ranchi on Friday.
Telegraph Picture
Our Correspondent   |   Ranchi   |   Published 03.09.21, 05:52 PM

On the first day of the week-long monsoon session on Friday, Jharkhand Assembly proceedings were held for barely half an hour during which customary condolence messages were read amid an uproar by the Opposition protesting against the Speaker for not recognising Babulal Marandi as leader of the BJP legislature party.

The House was adjourned till Monday.

Soon after the House commenced at 11am, MLAs condoled the death of former UP chief minister Kalyan Singh, Olympian Milkha Singh, legendary actor Dilip Kumar, among others. Thereafter, Speaker Rabindra Nath Mahto asked BJP chief whip Biranchi Narayan to read  out the condolence messages to which BJP MLA (Hazaribagh) Manish Jaiswal objected, stating that he shouldn’t do so when the party’s legislature  party leader, Babulal Marandi, was present.

Later, BJP MLAs joined in protests against the delay in Marandi’s appointment as Opposition leader in the House.

Amid the protest, the names of members of the House business advisory committee were declared. A list of presiding officers to run the House in the absence of the Speaker was also prepared.

Chief minister Hemant Soren, after walking out of the Assembly, did not comment on the BJP’s protests, but said that the Opposition should ensure the House was run in a meaningful manner.

The monsoon session will have five working days and will end on September 9 during which the state government is expected to introduce a Bill to mandate appointment of 75 per cent locals in the private sector. On September 6, the state is scheduled to table its first supplementary budget for the 2021-22 fiscal and is also likely to host a special session to debate and discuss caste- based census, which several Opposition parties across the country are demanding  ahead of this year’s nationwide census.

Congress, which is part of the ruling coalition comprising JMM and RJD, has on the other hand  announced to pursue 27 per cent reservation to OBCs  in the state.

The party's Jharkhand minder R. P. N. Singh said, “We will try to move a resolution for 27 per cent reservation to OBCs in the state government jobs. This was part of our election manifesto in the 2019 Assembly polls. We are also in touch with our coalition partners and are hopeful that all ruling and Opposition parties will be on board.”

Singh, who arrived in the state on Wednesday for a two-day visit, also said that creation of jobs and streamlining a local employment policy were their priority areas. “We discussed it with the chief minister during a UPA meeting at his residence on Thursday night. The  CM has assured us that the state government will soon come out with a list of vacancies later this year. Also, a few Congress MLAs and workers have some reservations against the new employment policy which was passed by the cabinet recently. We will discuss these with our alliance partners,” he said.