JMM, Congress, RJD, along with Left parties and social rights outfits and farmers unions in the state, have joined hands to support the nationwide bandh 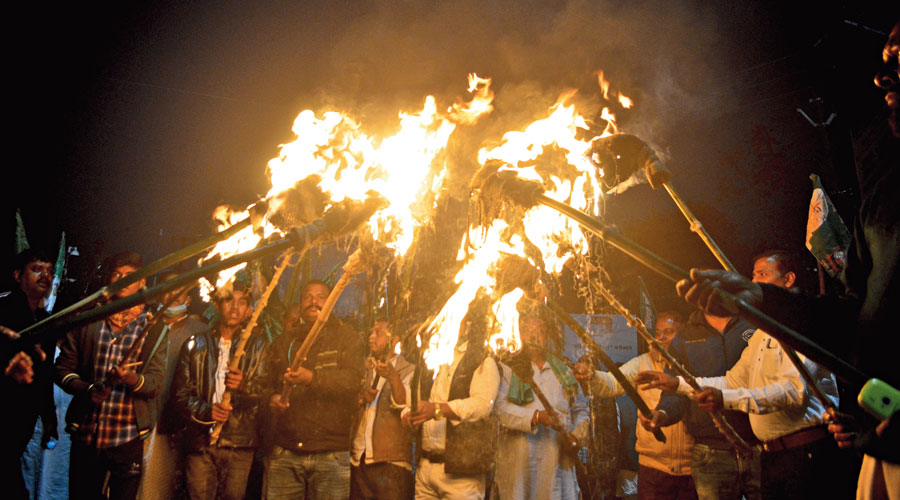 RJD supporters take out a torch rally at Randhir Verma Chowk in Dhanbad against the farm laws on Monday ahead of the Bharat bandh.
(Shabbir Hussain)
Animesh Bisoee   |   Jamshedpur   |   Published 08.12.20, 05:12 AM

Jharkhand chief minister and JMM executive president Hemant Soren has lent support to the Bharat Bandh call given by farmers and trade union outfits for repeal of the new farm laws on Tuesday and cautioned the Centre about the possibility of an “ulgulan” (rebellion).

“Our farmers are the pride of our country. The Union government has hatched a conspiracy to make the owners of lands and food producers slave in the country and an ulgulan will take place in Jharkhand too against the Union government. JMM fully supports the Bharat Bandh call given to express solidarity with kisan annadatas,” Soren tweeted late on Sunday night.

The word “ulgulan” was coined during tribal icon Birsa Munda’s rebellion against the British empire between 1899 and 1900.

JMM general secretary and party spokesperson Supriyo Bhattacharya, however, said that its party supporters would enforce the bandh in a peaceful manner.

“Most of the people in the tribal state of Jharkhand know about the ongoing struggle and agitation of the farmers against the new anti-farmer laws enacted by the Union government. We expect most of the establishments to down their shutters voluntarily during the bandh period. Our party cadres will peacefully try to persuade them to down their shutters in case they do not do so. However, emergency services will not be affected,” said Bhattacharya.

Almost all the ruling UPA alliance partners, including the JMM, the Congress and the RJD, along with Left parties and social rights outfits and farmers unions in the state, have joined hands to support the nationwide bandh.

“We have been staging agitation and burning effigies of the Union government in different districts for the past one week and our party supporters will go out to enforce the bandh in the state,” said Congress state executive president Rajesh Thakur.

The RJD and Left parties also took out torch rallies on Monday between Ranchi University and Albert Ekka Chowk in support of Tuesday’s bandh.

Civil rights activist Arvind Anjum observed a daylong fast in Jamshedpur as part of the agitation by Sarva Seva Sangh (a pan-India socio-political organisation) on Monday to protest against the farm laws and express solidarity with the ongoing farmers’ agitation.

“We are staging the daylong fast as part of the ‘annadata ke liye annatyag’ (fasting for food producers) programme of the Seva Sangh. Hundreds of Seva Sangh members are observing fast across the country and we will be supporting the bandh call on Tuesday,” said Anjum while fasting at his house in Jamshedpur.

With the ruling parties coming out in support of the bandh, public transport is set to take a hit in Jharkhand.

Three-wheelers and private cabs are also unlikely to hit the road. However, train services will run as usual.

Shopkeepers not supportive of the bandh call are adopting a wait and watch policy.

“We are not in support of the bandh call as it is the marriage season and the market is reviving. However, we will wait and watch,” said Federation of Jharkhand Chamber of Commerce and Industries president Kunal Ajmani.

The administration has geared up to maintain law and order during the bandh.