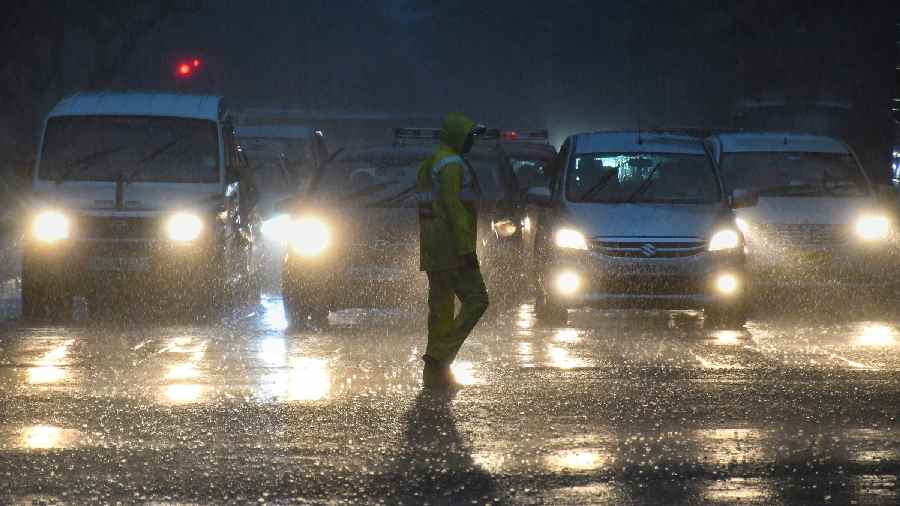 Heavy rainfall associated with high-speed winds since Friday evening uprooted scores of trees and electricity poles, and submerged low-lying areas in many districts of Jharkhand.

A woman died when a mud wall of her house caved in on her in West Singhbhum district on Saturday morning as the deep depression that crossed the Odisha coast on the previous evening brought incessant rainfall in several areas, an official said.

Normal life was thrown out of gear with rain disrupting power supply in many areas for long hours and causing traffic jams in major cities.

Two flights have also been cancelled till 2 pm due to bad weather on Saturday, officials at Birsa Munda Airport in Ranchi told PTI.

"The 50-year-old woman died in sleep when the mud wall of her house fell on her in Chaibasa area," Mufassil police station in charge Pawan Chandra Pathak said.

The water level of several rivers has either reached the danger mark or crossed it in the state's Kolhan region comprising West Singhbhum, Saraikela-Kharsawan, and East Singhbhum districts, an official said.

In East Singhbhum, heavy rains since Friday evening damaged many electric poles in Jamshedpur leading to power disruptions in several areas of the city.

"The electricity department team is working for the restoration of power but the work has been hampered due to continuous rain," an official of the East Singhbhum district administration said.

People living in catchment areas of the Kharkhai and Swarnarekha rivers were asked to shift to safer places after the district administration sounded an alert in view of the increasing water level caused by incessant rains in Jamshedpur since Friday, an official said.

Roads were inundated in several places in Chaibasa, while the civil court premises in Saraikela were submerged.

In Jharkhand capital Ranchi, the rainfall accompanied by strong winds uprooted trees and electricity poles in over 25 places blocking traffic movement on important roads. Most places in the city are experiencing power cuts.

At least four persons, who were on an indefinite dharna as part of Jharkhand Rajya Vidyalaya Rasoiya (Cook) Sangh near Raj Bhavan, were injured after a branch of a tree fell on them, the treasurer of the association Anita Devi claimed.

The deep depression was centered over south Jharkhand and adjoining North Odisha and West Bengal at 8.30 am on Saturday.

"It would continue to move west-northwestwards across Jharkhand and adjoining North Chhattisgarh towards north Madhya Pradesh during the next 24 hours and weaken gradually," Ranchi meteorological centre in-charge Abhishek Anand told PTI.

There is no warning from Sunday, as rainfall and wind intensity will decline. However, there is a possibility of light to moderate rainfall in parts of Jharkhand on Monday, he said.

Due to the heavy rainfall, the state's overall rainfall deficit has come down to 31 per cent from 38 per cent till Friday. Jharkhand had received 494.3mm of rainfall against the normal rainfall of 711.7mm from June 1 to August 20.