Officials fear fleeing animals may get into villages 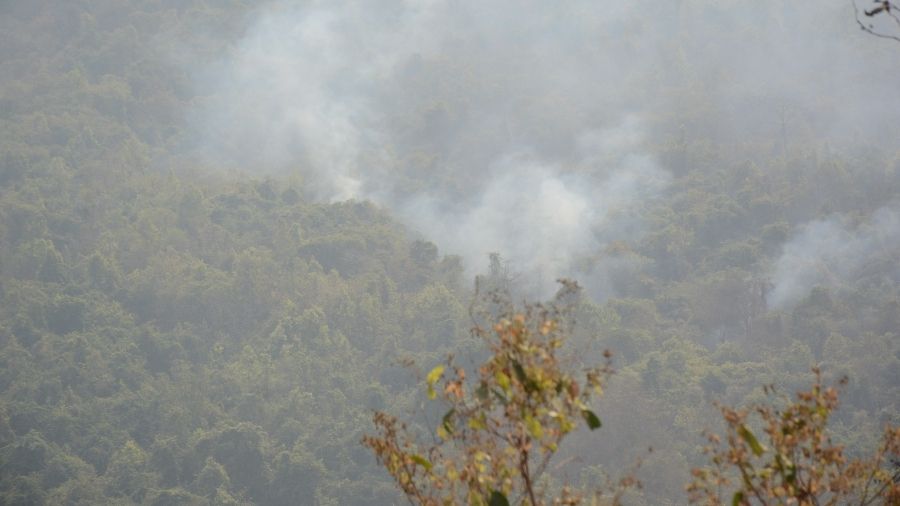 Forest fires are raging across some pockets of the sprawling Dalma wildlife sanctuary but foresters are trying their best to prevent the flames from spreading across the jumbo abode.

Assistant conservator of forest R.P. Singh said they were very concerned. "A fires inside the sanctuary is a matter of concern for us. We are trying our best and also spreading awareness among the villagers to protect the forests from fire. Forest belongs to everybody and it is our responsibility to protect it," he added.

Sources said fire was first spotted in the sanctuary near Dimna lake four days back. It was tamed in no time. However, fires occurred in other pockets in a big way, especially in forests near some villages downhill.

The season has compounded problems with dry leaves and tree branches spread across the 192 sq km sanctuary, 30 km from Jamshedpur.

Foresters have spotted flames mostly in the eastern range of the sanctuary. Smoke can be seen billowing from NH-33. Fires are raging in areas within the jungles near Bodam and Chimti villages as well as some hamlets. Eighty villages and hamlets dot the sanctuary known for Asiatic elephants.

Foresters fear animals would venture into villages if the fire spreads, putting their life in danger. Elephants are still in the fringe pockets of the sanctuary while some are anchored downhill.

Foresters blamed villagers for the incidents of fire. "Villagers venture into forest to collect wood. Most of the villagers smoke bidis and show utter carelessness by throwing them here and there. The embers fall on dry leaves and causes fire. We have time and again asked villagers to not throw lit bidis inside the sanctuary. But they don't pay any heed," one of the foresters said.

According to him, youths from Jamshedpur and elsewhere were also to be blamed for the fire menace. Some youths not only smoke cigarettes but also use the forests as a getaway place to smoke ganja. The sanctuary seems to have become the safest place  for this. Smoking should be banned inside the sanctuary," he added.

Dalma authorities spread awareness about the dangers of forest fires during World Wildlife Day on March 3 as well on March 10 and 11 when the faithful climbed the hills on the occasion of Shivaratri. Members of the eco development committee also chip to spread awareness.

Forest guards and trackers douse fires by tapping the lit leaves with sticks. It's a Herculean task and consumes time and labour while dousing the flames in a large area.