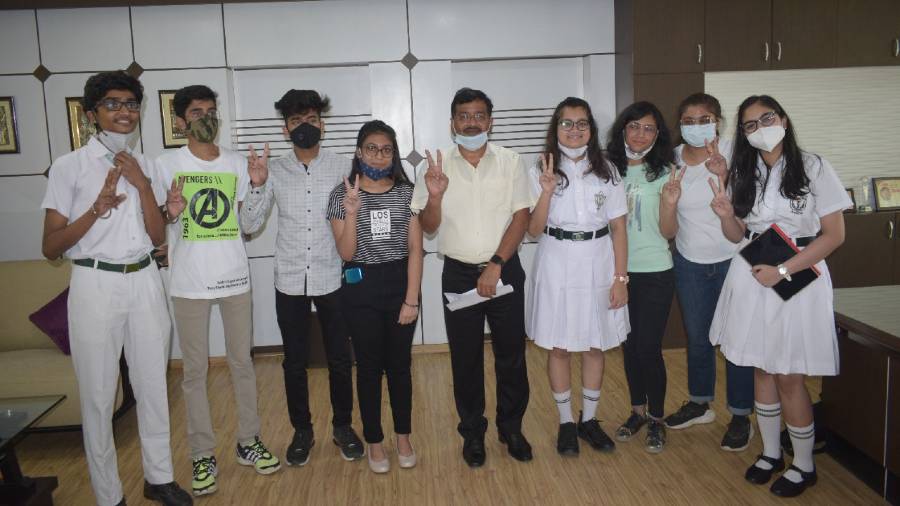 Toppers of CBSE class 10 boards pose with school principal at DPS Ranchi after result declaration on Tuesday.
Sourced by the correspondent
Our Correspondent   |   Ranchi   |   Published 03.08.21, 08:52 PM

Students of Delhi Public School (DPS)-Ranchi pulled off an exceptional performance in the CBSE Class 10 exams, the results of which were declared on Tuesday, with over 60 per cent students scoring over 90 per cent marks that were evaluated using an alternative system based in part on internal assessments of schools.

While 99.66 per cent students of the Patna region, under which Jharkhand falls, passed, several hundred students from Ranchi secured more than 90 per cent marks.

Girls trumped boys in the toppers' list announced by various schools. Two students of DPS-Ranchi – Arshia Hussain and Shreya Bhaskar – scored 99.6 per cent marks, while 218 of the 353 class students from this school secured more than 90 per cent, as per data released by the school administration.

As per details shared by Jawahar Vidya Mandir, another Ranchi school with a reputation of producing toppers, Sandeepa Sarkar and Abhinav Raj secured 99.4 per cent. Of the 328 students of JVM-Shyamli, at least 105 scored more than 90 per cent marks.

“Our students have performed really well even under the stress and panic of a global pandemic. This year was not a normal year for them and they should get credit for not letting the negativity affect their academic performance,” said Ram Singh, the principal of DPS-Ranchi and also coordinator of CBSE schools in Ranchi.

CBSE results were based on internal assessments and performance of students through the course of their academic year in the school. CBSE Class 10 board exams were scheduled to start on May 4, but the board had to do away with the idea of in-person exams due to a spike in the cases of Covid-19.