The criminals entered the shop one by one, posing as customers 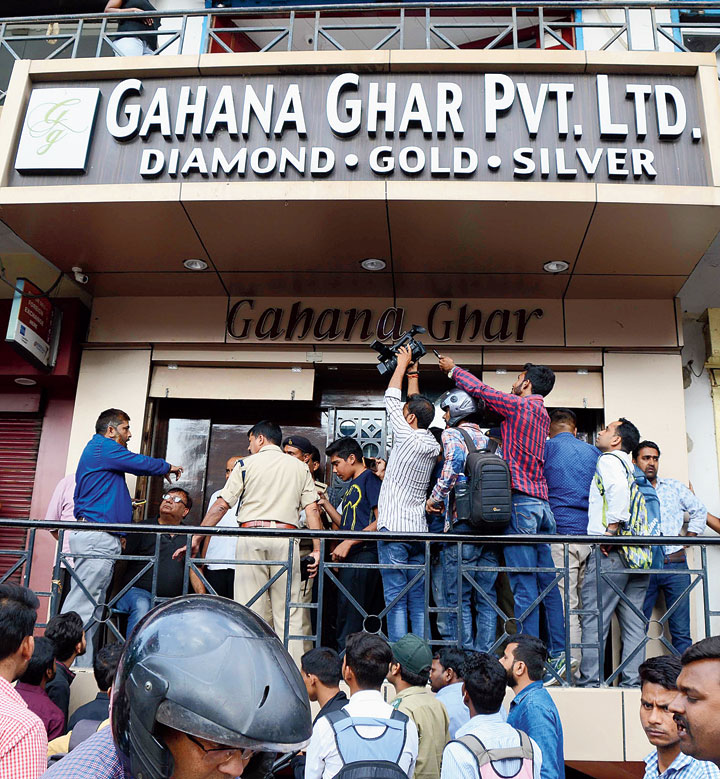 “We have collected some photographs from the spot. I hope the case will be cracked soon,” SSP Gupta said.

The victims had to undergo surgery at Rajendra Institute of Medical Sciences (RIMS) in Bariatu. “Their condition is serious,” a doctor at RIMS said, requesting anonymity.

The Federation of Jharkhand Chamber of Commerce and Industries expressed concern over criminals increasingly becoming brazen in the capital.

“We are feeling unsafe and want the administration to tell us how we can remain safe,” said FJCCI president Kunal Ajmani.

“We also want to know from the administration how come the criminals in the city have become such daredevils that they enter a shop beside a bank in the heart of the city and fearlessly commit crime and flee.

“Police so far has claimed to procure the CCTV footage,” he added. “Now, we give an ultimatum of 48 hours to nab the five criminals, failing which we will start our protest. After 48 hours, we will go about our work with black ribbons on our shirts.”

A woman out on morning walk had a harrowing experience on Monday when a man tried to snatch a rolled-gold chain from her neck, thinking it was real gold.

The snatcher fought with passers-by who rushed to help Mala Jha on hearing her scream, including four body guards of former Koderma MP Ravindra Rai, till he was overpowered and handed over to police.

Kishore Jha, a relative of Mala, said Kadru resident Mala was on her usual 2km walk near Rai’s residence. Rai’s security guards and around 20 residents eventually overpowered the man and handed him over to police.

“The criminal identified himself as Santosh Kumar Rathore, a resident of Rourkela in Odisha. He said he did all this under the influence of drugs. We have produced him before the court. Further probe is on,” said Argora police station officer-in-charge Asit Kumar Modi.

The Telegraph had on September 20 this year highlighted how areas under Argora police station such as Harmu and Kadru have become crime hotspots.

Five armed men entered a jewellery shop near Lalpur Chowk in the heart of the city on Monday and shot at the owners, brothers Rohit, 40, and Rahul Kheriwal, 35, in what police said was a loot attempt gone wrong.

The incident occurred around 2pm when five men on two bikes reached Gahana Ghar adjacent to ICICI Bank on the ground floor of the four-storey Amravati marketing complex under the Lalpur police station area.

Sources said apart from the Kheriwal brothers, their father Banwari was the only one present at the shop at the time.

The criminals entered the shop one by one, posing as customers.

“They asked the owner duo to show ornaments,” a shop owner of Amravati complex, who rushed the injured to hospital in a police vehicle, told The Telegraph. “As the brothers got busy showing jewellery items, one of the men tried to snap a wire connected to the CCTV camera. When Rohit objected to it, one of the five men whipped out a gun and fired at him. The bullet hit Rohit’s stomach. When the men tried to leave the shop sensing trouble, Rahul tried to catch hold of one of the intruders, who fired at him. Rahul took two bullets, one on his thigh and one in the stomach. The criminals escaped on two motorbikes towards Peace Road.”

“We are scanning the footage from CCTV cameras installed in the locality. We are also waiting for the statement of the injured and their father,” Singh said.

“However, we inspected the shop and found that all the items were safe,” he added.