Of the five Assembly constituencies in the Singhbhum region, the BJP did not win a single seat 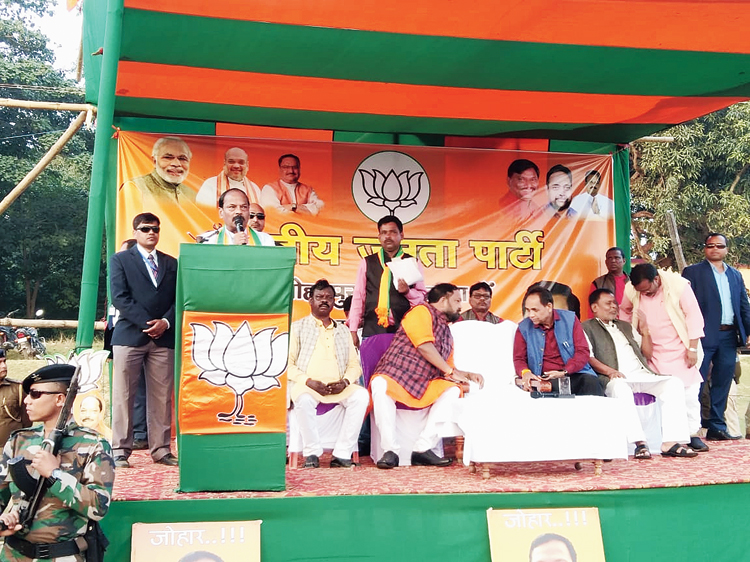 Chief minister Raghubar Das attempted to storm the JMM bastion in Singhbhum by holding four rallies in a day in West Singhbhum district on Friday.

Of the five Assembly constituencies in the Singhbhum region, the BJP did not win a single seat in the last state polls. The JMM had won four, and Geeta Koda who has since then joined the Congress had won the Jagannathpur seat.

The chief minister stressed achievements in terms of infrastructure by the “double engine sarkar”.

“We have carried out development both in rural and urban areas on equal footing in providing electricity, improving road connectivity and providing drinking water connections. With your blessings we will be coming to power and fulfil Prime Minister Narendra Modi’s dream of providing piped drinking water to each village and houses for all by 2022,” said Das.

He underlined schemes for girls.

“Our government believes in first vidya daan (education) and then kanya daan (marriage) and this made us start the Mukhyamantri Sukanya Yojana under which the government will give Rs 70,000 to the parents of a girl child to meet her education and other needs till she reaches the age of marriage.”

In a bid to woo the Ho tribe, members of which still hold their community member and former chief minister Madhu Koda in high esteem, Das said: “Koda was a good person but it was the Congress and the JMM who made him a pawn in the mining scam.”

The chief minister claimed that in the last 14 years unstable governments have led to the plight of the tribals.

The Assembly seats in Singhbhum go to polls in the second phase, on December 7.