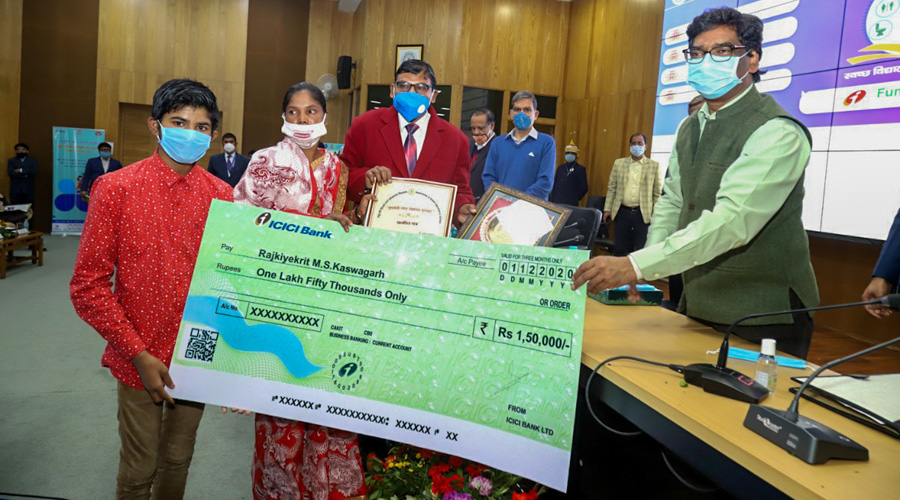 Chief Minister Hemant Soren hands over a cash prize to representatives of a school for cleanliness under the Mukhyamantri Swaccha Vidyalaya awards in Ranchi on Thursday.
Picture by Manob Chowdhary
Our Correspondent   |   Ranchi   |   Published 03.12.20, 08:03 PM

Chief minister Hemant Soren felicitated toppers of class 10 and 12 board exams on Thursday by presenting cheques worth Rs 1 lakh to each student for meritorious performance and also presided over the launch of two digital teaching platforms to improve the quality of online education in government schools.

This year, more than seven lakh students appeared for class 10 and 12 exams conducted by Jharkhand Academic Council (JAC), Central Board of Secondary Education (CBSE) and the Council for the Indian School Certificate Examinations (CISC) in Jharkhand.

On July 22, the Jharkhand Cabinet decided to give away cash awards of Rs1 lakh to each of the toppers of class 10 and class 12 in a bid to encourage them to pursue higher goals. As per a document shared by the HRD department, as many as 38 students were felicitated.

Through the Learnytic app, students will get access to e-books, sample question papers with answers, and audiovisual aids, something that was ill now restricted to private schools of Jharkhand.

Officials of Jharkhand Education Project Council (JEPC) said the apps were much needed for government school students as online classes using WhatsApp were quite challenging for teachers. Students will have to get registered on the two apps, using their school credentials, and get access to all the study materials.

Besides giving away cash prizes to toppers, Hemant also felicitated at least eight government school students, who found berths in IITs and medical colleges after preparing through Jharkhand’s Akansha project. Under the project, the government provides free coaching to meritorious students of government schools to help them crack JEE and NEET exams.

Due to Covid-19 restrictions, another 110 schools, which were supposed to get felicitated in Ranchi, were given the awards at ceremonies organised in their respective districts on Thursday. “Due to Covid-19 restrictions, all of you could not attend the event. However, I thank everyone participating in the ceremony via online platforms for joining us today,” said Hemant.

Talking about the glorious past of some of the reputed schools in Jharkhand, Hemant said that Netarhat School in Latehar had produced more than 2000 IAS officers. “We feel proud that schools of such high stature are imparting education to our children,” he added.