Book on Birsa Munda is befitting tribute to freedom fighter 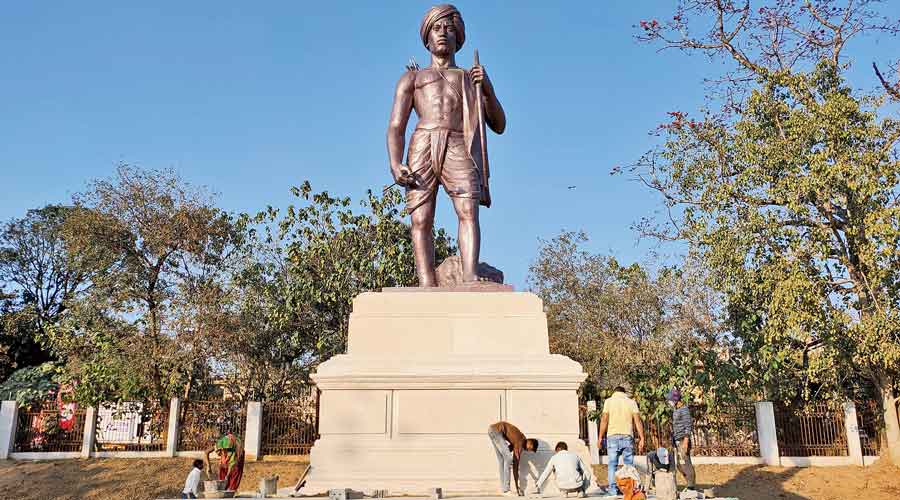 A new book pays tribute to the life and times of tribal hero Birsa Munda and seeks to bring to the forefront the important role the revolutionary played in India's independence struggle.

The Legend of Birsa Munda, co-authored by Tuhin A Sinha and Ankita Verma and published by Amaryllis, an imprint of Manjul Publishing House, is a dramatised recreation based on historical facts.

While the character and story of Munda are based on a historical figure, the situations, incidents, characters and dialogues in this novel, with the exception of well-known historical events and public figures, are products of the authors' imagination.

Munda in his very short life, mobilised the tribal community, rebelled against forced conversions, envisioned a fairer, more just society and died fighting for it.

"Birsa lived and died locked in a battle against injustice and oppression. He was willing to walk in the darkness, if only to keep his people in the light. He never faltered, never wavered, never feared for his own safety. He was beaten, abused, and tortured again and again, yet he stayed true to his beliefs and to the cause," the book says.

"He never doubted the fact that he would have to die for it one day, but in his mind, it truly wasn't too high a price to pay. Following his death, the Ulgulan (movement started by Munda against the exploitation and discrimination of tribals by local authorities) did lose its edge, but the spark of rebellion had been lit," it says.

Besides his early days and his involvement in the movement, the book also talks about the time after Munda's demise on the morning of June 9, 1900.

"Under the strict instructions of the Ranchi jail authorities, the prison doctor registered cholera as the official cause of Birsa's death. The man who had attended to Birsa, bringing him his meals and bearing witness to his death, was never seen again anywhere in Ranchi," the authors write.

The attendant's sudden disappearance caused ripples of suspicion among Munda's supporters, but there wasn't anything that anyone could do.

"That Birsa was possibly slowly being poisoned to death in prison was something most of his followers believed. Whispers about the jailer's refusal to provide Birsa with medical aid despite his deteriorating condition only strengthened this belief," the authors claim.

According to Sinha, young Birsa Munda's spiritual evolution into "Bhagwan Birsa Munda" marked the resurgence of the tribal Munda clan, which had been facing unspeakable atrocities for decades.

"It needs to be noted that the freedom struggle in tribal areas was layered. They had to stand up to foreign missionaries as well as the zamindars who were hand in glove with the British. Birsa's armed revolution of December 1899 brought the Britishers to their knees and forced them to adopt a more conciliatory attitude towards tribals," he says.

While researching for the book, Verma says she discovered that Munda was not only a revolutionary but a true reformist.

"It takes an extraordinary spirit to inspire people to face British guns with only bows and arrows. Birsa Munda is a patriot in the true sense," she says. The authors have made a pitch for conferring the Bharat Ratna on Munda.

"In this situation, when Birsa Munda is the source of strength and inspiration for the Adivasis as they fight against injustice, it would be a fair expectation to celebrate his legacy by conferring the Bharat Ratna upon him, thereby making him the first Adivasi to be conferred with this prestigious title, a befitting award for the man who seeded the ideas of revolution and self-rule in the hearts and minds of his people," they say.

On November 15, 2000, on the occasion of Munda's 125th birth anniversary, the then prime minister Atal Bihari Vajpayee created the state of Jharkhand, carving it out from the southern districts of Bihar.