Bishu Shikar at Dalma sanctuary turns out to be bloodless 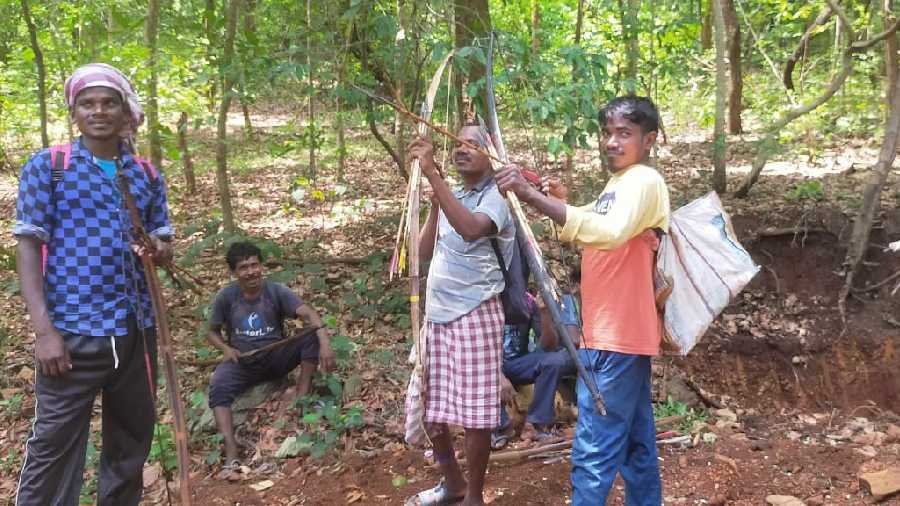 Armed with bows, arrows, spears, the tribals from Jharkhand, Odisha and Bengal had gathered in good numbers to celebrate their annual festival but only a few could sneak inside the 192 sq km elephant abode, 30 km from Jamshedpur.

Foresters guards and foresters deputed at separate check points did not allow the tribals to venture inside the sanctuary. The patrol teams also scanned the sanctuary, including the core area.

The forest teams focused more on the Patamda (in East Singhbhum) side of the sanctuary. This part of the Damla hills is sensitive as tribals used to kill animals, dump them into vehicles  and escape from the sanctuary on earlier occasions.

Rakesh Hembrom,  chief priest of Dalma Buru Sendra Samity (DBSS), a frontal organisation of adivasis, a puja was performed on the foothills and a hen was also sacrificed on Sunday evening before the tribals tried to slip into the sanctuary.

"It was a peaceful Sendra and no animals were killed. We had identified 17 sensitive routes for patrolling and 11 checkpoints where forest guards and foresters were deployed. Senior forest officials also supervised the situation. Forest teams numbering around 150 were on duty till evening," said Dalma divisional forest officer Abhishek Kumar.

According to him,they had made extensive preparations about a month ago to ensure a bloodless Sendra. "We had screened short films on the futility of killing animals as part of our awareness campaign, " the DFO said, adding that tribals should concentrate on identifying herbs and plants in forests instead of killing animals.

Kumar stated that Very few tribals could enter the sanctuary. "Our team deputed at the check points requested and convinced the adivasis to go back. No nets or traps were recovered. It's a positive sign. People are getting aware about the futility of killing innocent animals in the  name of tradition," he added.