A huge force has been deployed to quell agitation by villagers after workers started to dig a trench on 550 acres for the construction of an ash pond for Damodar Valley Corporations' (DVC) Koderma Thermal Power Plant in Banjhedih. 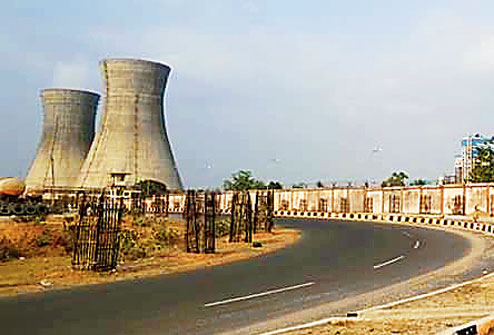 Hazaribagh, Feb. 23: A huge force has been deployed to quell agitation by villagers after workers started to dig a trench on 550 acres for the construction of an ash pond for Damodar Valley Corporations' (DVC) Koderma Thermal Power Plant in Banjhedih.

Villagers said they had given up their agricultural land for the construction of a township and not an ash pond, which they said would cause pollution.

An ash pond is used for the disposal of bottom ash and fly ash generated by power plants.

In March 2008, then Union power minister Sushil Kumar Shinde had laid the foundation for the construction of an 1,000 megawatt (MW) power plant by DVC in Jai Nagar, around 21.5km from the Koderma district headquarters. The first 500MW unit of the plant began operations in 2012 and the second unit in 2014.

However, KTPS is able to generate only 400-500MW in the absence of an ash pond, which DVC officials said was resulting in a loss of Rs 2 crore daily.

Vicky Rana, one of the agitators, said the ash pond should be constructed at least 600 metres away from the present site. He said the DVC should obtain a no- objection certificate before starting work.

Sources said there was pressure on the company from several quarters to get the project - which had been crippled by agitations - off the ground by resolving the issues as soon as possible.

Apprising the state government about the situation, DVC officials urged it to bail the company out of trouble.

Koderma SDO Prabhat Kumar Bardiyar said the company was first digging a trench to mark the plot. It will then try to clear the misconception among the agitators regarding the ash pond. Work on the pond will only start after a no-objection certificate from the pollution board.

Officer-in-charge of Jai Nagar police station Hari Nandan Singh said there was adequate security arrangement at the site and warned that those who took law into their hands would not be spared.

Deputy chief engineer of KTPS Madhukant Jha said the company would take all measures to put a check on pollution in the area, including taking up a massive plantation drive. "We assure all that there will be no environmental hazard because of the ash pond," he told The Telegraph.