Two days a week, 10am to 2pm for now, says hospital director 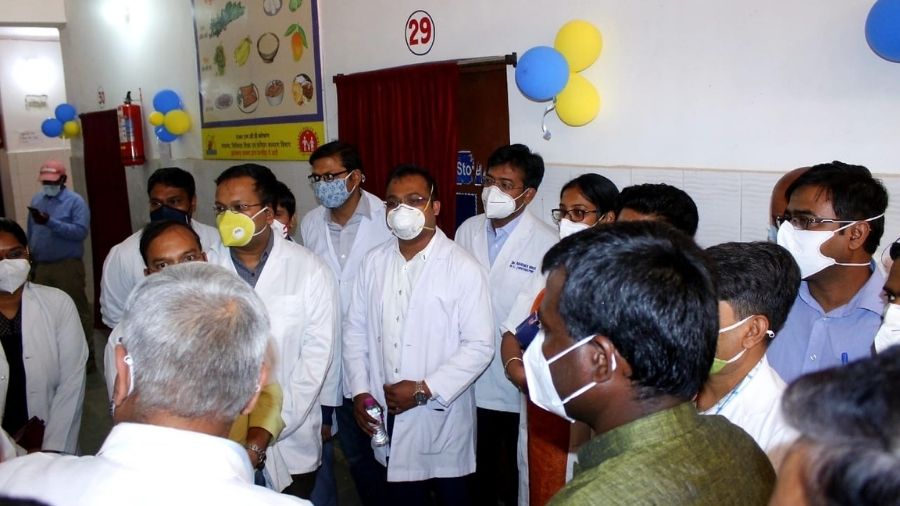 Officials, doctors and health workers at inauguration of the AIIMS-Deoghar OPD at a health centre at Devipur.
Telegraph Picture
Our Correspondent   |   Ranchi, Dumka   |   Published 11.03.21, 08:04 PM

All India Institute of Medical Sciences (AIIMS)-Deoghar has set up an out patient department (OPD) at a community health centre of the temple town to initially offer free medical consultations twice a week, officials of the district administration said.

The OPD was inaugurated by Deoghar deputy commisioner Manjunath Bhajantri and AIIMS-Deoghar’s incumbent director Saurabh Varshney earlier this week (Tuesday) at Devipur community health centre (CHC).  “The OPD will initially function twice a week—Mondays and Fridays,” the deputy commissioner said in a statement issued by the district administration.

The OPD will function from 10am to 2pm, a considerable boost to the district in its efforts to improve health services. The temple town Deoghar, which is home to renowned Babadham temple, is short of adequate healthcare facilities to cater to its vast population.

As per district health department records, for a population of about 18 lakh, the district now has eight community health centres (CHCs), five primary health centre (PHCs), and 300 sub health centres, besides one sadar (district) hospital.

“We are short of 10 CHCs compared to the population, but we are extending sub-health centres to fill the gap,” said an official, unwilling to be named, adding that the district currently has close to about 50 doctors on government rolls, which is also short by about half the total requirement. “In that respect, the start of OPD services by AIIMS, will be a boon for us,” he remarked.

Bhajantri said that the AIIMS management was also working out plans on priority to start a permanent OPD at its upcoming campus in Devipur after which one can expect specialists from Delhi and other AIIMS centres to be available for consultations. AIIMS-Deoghar is currently operating from the Panchayat Training Institute in Deoghar. Work on a permanent campus is underway. Bhajantri said the permanent campus was expected to be ready by next year.

In the 2017-18 Union budget, the Centre announced an AIIMS in Jharkhand. Later, the state government identified a 236.92-acre plot in Deoghar to set up the hospital. In May 2018, the Union cabinet approved funds to the tune of about Rs 1,000 crore for the project after which Prime Minister Narendra Modi laid the foundation stone.

AIIMS-Deoghar began inducting MBBS students since 2019. It admitted 50 students in the first batch and increased it to 62 last year. This year’s admissions are yet to get over.