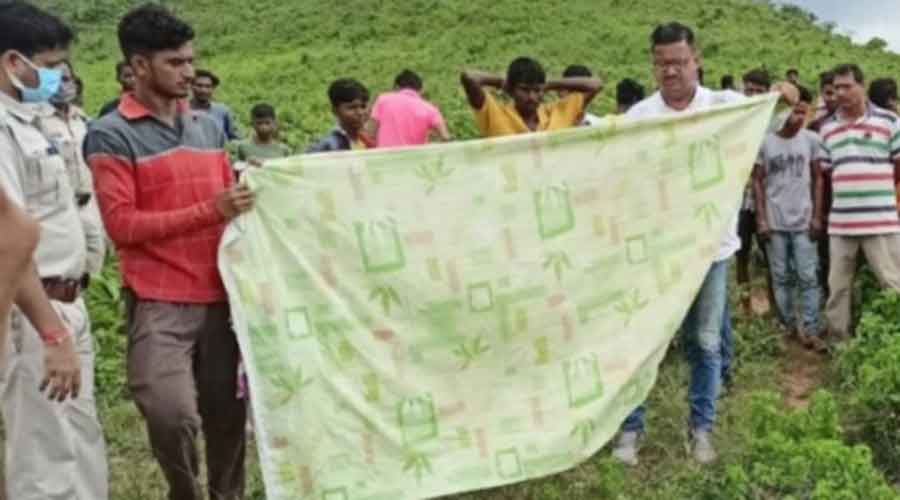 Police and local residents at the spot in the Dalma foothills near the boy's body on Saturday.
Animesh Sengupta
Kumud Jenamani   |   Jamshedpur   |   Published 12.09.21, 01:18 AM

The decomposed body of an 11-year-old boy was found lying on a hill in the foothills of Dalma under Mango thana area about eight km away from the heart of the city on Saturday morning.

Identified as Sujit Gorai, the deceased was suspected to have been bludgeoned to death as the body bore marks of injuries and a blood-stained boulder was lying beside it.

Son of Dharnidhar Gorai, a resident of Kumrum Bustee along the NH-33, the deceased was missing from his house since September 9 morning and the body was found on the hill, about one kilometre from his house at about 10.30 am on Saturday.

A police party led by deputy superintendent of police (Headquarters-1) Birendra Ram reached the spot after the body was found.

"The boy was suspected to have been bludgeoned to death as a blood-stained boulder was found beside the body," said OC, Mango thana, Vinayak Kumar to The Telegraph Online.

Kumar said they can conclusively say it to be a case of murder after getting an autopsy report only.

"At the time the body was found today, it was filled with magots. Though a boulder bearing marks of blood was found near it but it is yet to substantiated whether the boy has been murdered. Moreover, the deceased's father did not hint at any enmity with anyone," said the OC.

He pointed out they have shifted the body to the MGM medical college mortuary for the post mortem so that the truth can be known.