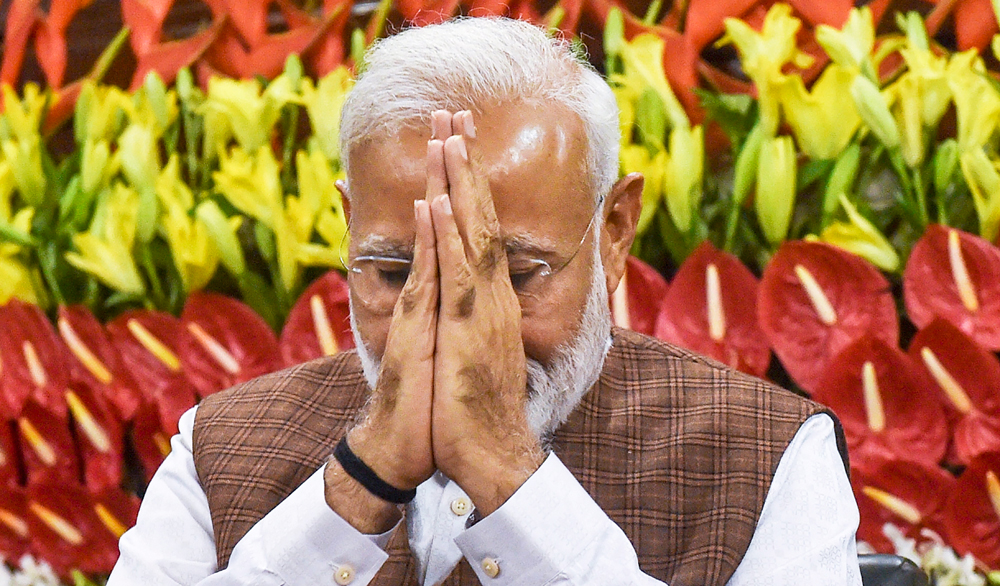 A Muslim youth has alleged that he was mercilessly beaten, questioned about his skullcap and forced to chant “Bharat Mata ki jai” in Gurgaon on Saturday, the day Prime Minister-elect Narendra Modi had appealed to the MPs supporting him to win the faith, trust and support of minorities.

Police blamed an unidentified, drunken youth but the complaint by Mohamad B. Alam, who hails from Bihar, refers to four assailants. It also speaks of an unsuccessful attempt to make him chant “Jai Shri Ram”.

The allegation echoes a pattern of harassment and taunts witnessed in the past few years and bears out the fears among the minorities in the wake of the overwhelming election verdict. The incident took place at night but it was not clear whether it preceded or followed Modi’s appeal.

Alam had arrived in Gurgaon last week to become a tailor’s apprentice. He was walking along a main market road when another youth accosted him and asked him why he was wearing a skullcap, police said on Sunday.

“They had a brief confrontation. The accused allegedly pushed the complainant,” Rajeev Kumar, the assistant commissioner of police, city, Gurgaon, told The Telegraph. “We have been told the accused was drunk.”

The victim went to a hospital from where he was discharged after treatment for bruises, the police said. Kumar said the police had registered an FIR and procured CCTV footage. “He is a local and we will get him soon.”

But Alam’s complaint, which has been converted into an FIR, makes graver allegations and the number of accused it mentions differs from the police officer’s account. It was not clear whether the officer’s account was based on the footage and whether it showed only one suspect.

“The accused threatened me, saying wearing a cap was not allowed in the area. They removed my cap and slapped me, while asking me to chant ‘Bharat Mata ki jai’,” Alam says in the FIR.

“As I followed their instruction and chanted ‘Bharat Mata ki jai’, they asked me to chant ‘Jai Shri Ram’ but I refused. At this, the youths picked up a baton from the roadside and began mercilessly beating me. They hit me on my legs and back.”

In the FIR, Alam says he was returning home after offering namaz at a mosque at Sadar Bazar when the incident took place. He says that as he cried for help, other people from his community rushed to help him and the assailants fled.

The police said the FIR had been registered under sections dealing with the promotion of enmity between people of different religions, riots and unlawful assembly.

Modi’s appeal to NDA members at the Central Hall of Parliament on Saturday evening had come against the backdrop of a series of hate crimes, lynchings and assaults on minorities over the past five years.

A Human Rights Watch report released earlier this year had said that mob violence by extremist Hindu groups against minority communities had continued throughout 2018. The HRW report had documented, till November last year, 18 attacks on Muslims that had claimed eight lives.