It will be a Rashtra mandir and its work will move forward with full speed, says the minister 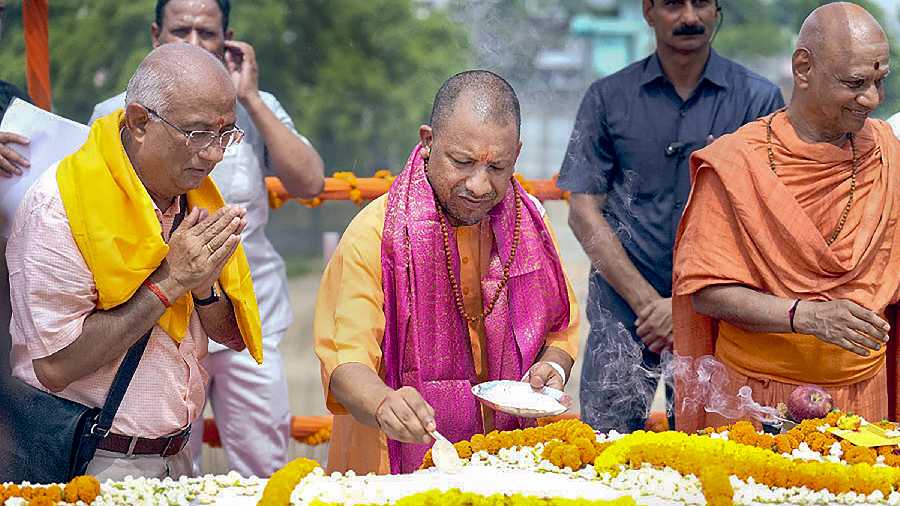 Uttar Pradesh Chief Minister Yogi Adityanath on Wednesday performed a 'Shila Pujan' of the sanctum sanctorum of Ram temple and said the temple will be a Rashtra mandir and a symbol of people's belief.

He laid the foundation stone amidst chanting of mantras in the presence of Ram temple trust officials, Deputy Chief Minister Keshav Prasad Maurya and others.

"This temple will be symbol of people's belief. It will be a 'Rashtra mandir' and its work will move forward with full speed.

"The 500-year old 'tadpan' (uneasiness) of devotees is going to end and we will have a temple here," Adityanath asserted.

Earlier, Maurya said the first phase of the Ram temple construction is completed and the second phase will start after the foundation laying of the sanctum sanctorum.

"The construction of Ram Janmabhoomi temple was started after the decision of the Supreme Court. After the completion of the first phase, the second phase of the temple construction will start with the laying of foundation stone by the chief minister, he said.

The minister added that it was a day of great happiness for the devotees of Lord Ram.

Enthusiasm was palpable among the believers who decorated the temples and maths' of the holy town with flowers and lights.

Acharya Satyendra Das, chief priest, Ram temple, said there is enthusiasm all over the country for this great moment.

UP: Trans people can get benefits