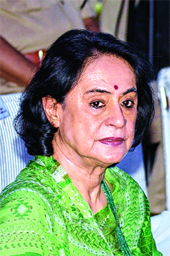 "I feel I must decline as there is a general election looming and the timing of the award might be misconstrued," Mehta wrote
Telegraph file photo
PTI   |   Bhubaneswar   |   Published 26.01.19, 07:14 AM

Writer Gita Mehta on Saturday declined the Padmi Shri, saying it could be 'misconstrued' in an year of major elections.

Mehta, who is Odisha chief minister Naveen Patnaik's sister, was awarded the Padma Shri in the field of literature and education.

'I am deeply honoured that the Government of India should think me worthy of a Padma Shri but with great regret I feel I must decline as there is a general election looming and the timing of the award might be misconstrued, causing embarrassment both to the government and myself, which I would much regret,' Mehta said in her statement from New York.

Lok Sabha polls in the country as well as state Assembly elections in Odisha are due this year.

Prominent among the books authored by Mehta are Karma Cola, A River Sutra, Snakes and Ladders: Glimpses of Modern India and Eternal Ganesha: From Birth to Rebirth.

The 76-year-old writer has also produced and/or directed 14 documentaries.