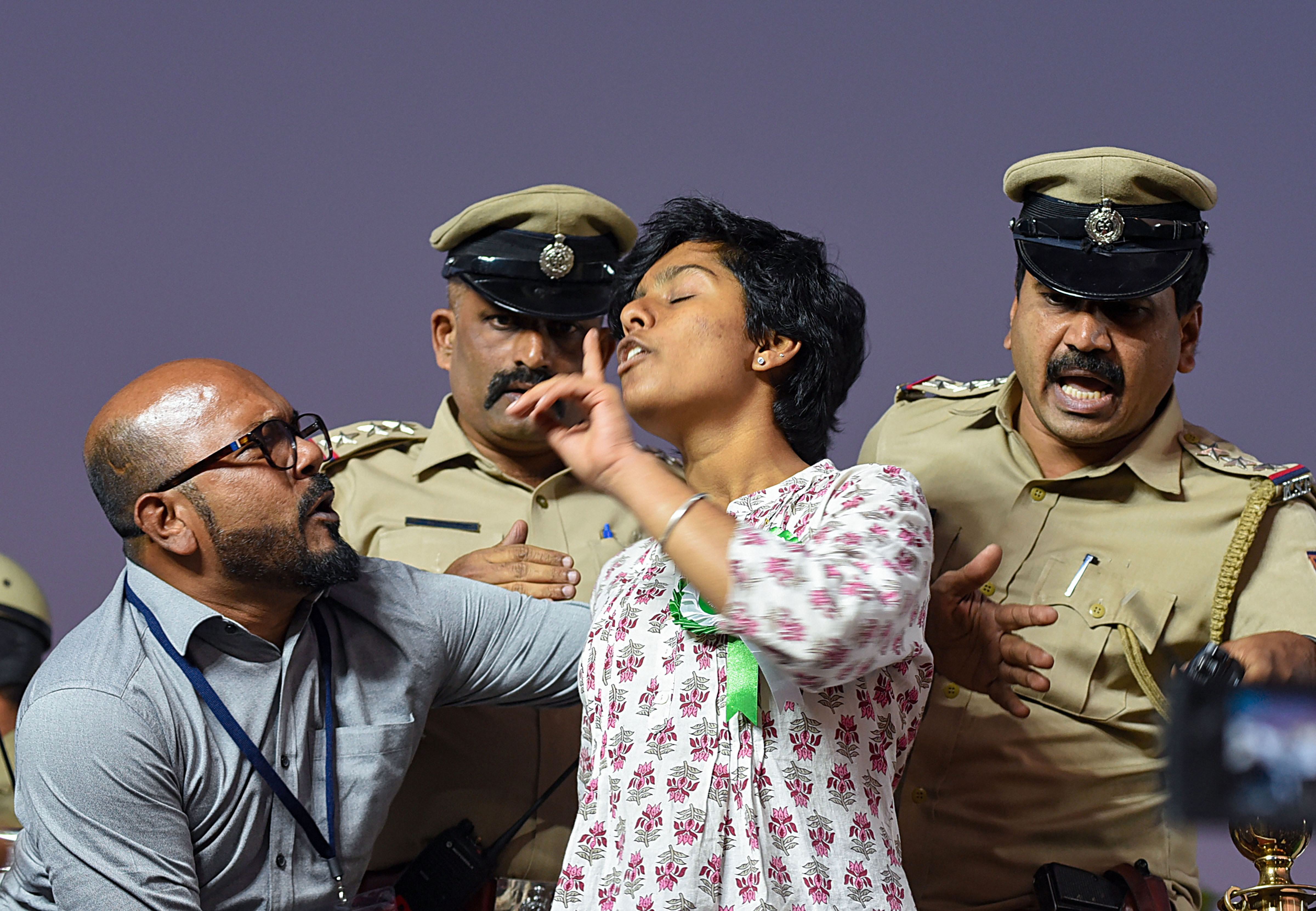 A young woman who raised pro-Pakistan slogans at an anti-CAA rally in Bengaluru on Thursday has been booked for sedition and remanded to 14-day judicial custody, police said on Friday.

Reacting to the incident, Karnataka chief minister B. S. Yediyurappa said the woman has had links with Naxals in the past.

The woman concerned, Amulya Leona, had raised 'Pakistan Zindabad' slogan thrice after the organisers of the event under the banner of 'Save Constitution' invited her to address the gathering in the presence of All India Majlis-e-Ittehadul Muslimeen (AIMIM) chief Asaduddin Owaisi, on Thursday.

After being removed from the stage, she was later arrested on charges of sedition and produced before a magistrate court which remanded her to 14 days judicial custody.

Her father also called for action against his daughter in accordance with law, saying she has made an 'unforgivable mistake.'

On Friday, Yeddiyurappa said: 'Importantly, the organisations that are behind people like Amulya and nurturing them, if we don't take action against such organisations, such things won't end.'

'Prima facie it is clear that there is conspiracy going on to disturb law and order with such incidents,' Yediyurappa told reporters in Mysuru.

The girl's father himself has said she should be punished and should not get bail and that he will not seek protection for her, the chief minister added.

Police will also be questioning the organisers of the event in connection with the incident, official sources said.

Meanwhile, Leona's father Wazi said action should be taken against her in accordance with law, so that she corrects herself.

'It is an unforgivable mistake, she has caused pain to Indians. I'm deeply disturbed...action should be taken against her in accordance with law, she is around 19, we will have to find out why she said it and who is behind it,'he added.

'She is a bright girl...I have tried to tell her not to involve herself in such activities after I got to know she was involving in anti-CAA, anti-NRC protests and complete her education first,' he said.

He expressed apprehension over possible health issues of his daughter.

Police have provided security to Amulya's residence at Koppa in Chikkamagaluru after some protesters had staged demonstrations, officials said.

Several organisations held protests in the city on Friday against the incident.