With no money or job, stranded migrant workers desperate to return home 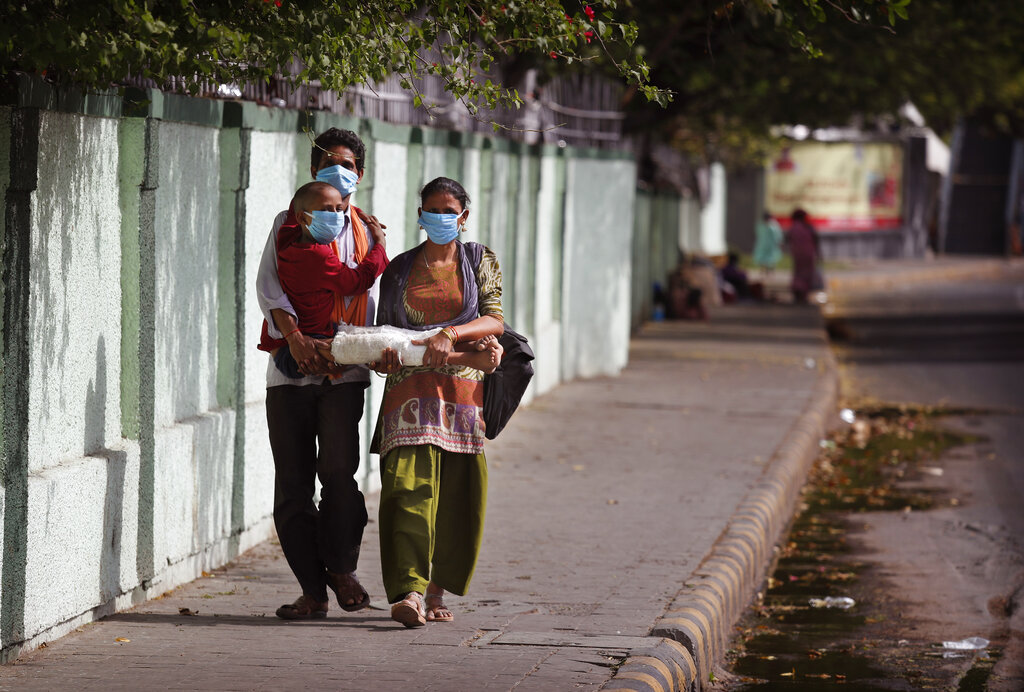 Farm laborer Ramakishan, and his wife Devshree walk carrying their son Gurudev, 11, to the All India Institute of Medical Sciences during lockdown to control the spread of the new coronavirus in New Delhi, on Monday, April 13, 2020.
AP
PTI   |   New Delhi   |   Published 15.04.20, 10:11 AM

Migrant labourers who leave their villages in search of work during non-agricultural months are stranded in cities across India, leaving their families fearful that their harvest-ready crops will wither and die on the stalks and push them deeper into debt.

With three weeks gone and maybe another three to go before they can even contemplate returning to their villages, the days ahead stretch interminably for the thousands of migrant labourers who decided to not take the long walk home but wait for the lockdown to end.

And now, with the lockdown extended till May 3 to stem the spread of the coronavirus, the little money they had is mostly gone and so is hope it will end anytime soon.

Anil Yadav, a daily wager with the parcel department of the railways who was ready to rush back to his village in Maharajganj in Uttar Pradesh to harvest the wheat crop, is still stunned by Prime Minister Narendra Modi's announcement on Tuesday extending the pan India shutdown by 19 days.

'I have already lost the entire sugarcane crop sown in my one 'bigha' land. It could have brought my family some money. But I can't go back and no one can harvest the wheat on the remaining two 'bighas',' said the 28-year-old.

'My wife, two children (aged one and three) and old parents have no support. They can't step out even to buy necessary items. They don't have money and now I am stuck here,' he told PTI.

Sitting under a tree in the complex, dispiritedly eating his dal-rice lunch, Yadav added that his family is staring at a huge financial crisis and plead with him everyday to return home.

With all of India under lockdown, there are no train or inter-state bus services. Yadav is one of the 330 people, including the homeless and migrants, staying at the Yamuna Sports Complex camp that has been turned into a shelter home by the Delhi government.

On April 1, a week after the first phase of the lockdown came into effect, Yadav was one of the many thousands who went to the Anand Vihar Interstate Bus Terminal hoping to manage a seat. Instead, he was packed into a bus by police and sent to the Yamuna Sports Complex.

Asha Devi, a mother of four, tries hard to fight back her tears as she talks about her two sons, one 14 and the other only six, alone at their village in Uttar Pradesh's Banda district.

'My two sons are all alone at home. The older one works as a daily wage labourer and looks after his younger brother. I am so scared,'' the 36-year-old said.

Sitting next to her is a group of 13 daily labourers, including her husband and her extended family members, from Uttar Pradesh's Banda district.

After the lockdown, which came into effect after Modi's announcement on March 24, the contractor who hired them assured them of rations but suddenly disappeared leaving them with no money or food.

With no option left, the group walked miles to reach Anand Vihar, only to be herded by the police to the Yamuna Sports Complex.

She was forced to step out of the village with her 11-year-old daughter who helped her in the brick kiln. The eldest, also a girl, is married.

'I want to go back home. If we have to die, we will do that together,' she said.

She, like the others, was pinning her hopes on the lockdown ending on Wednesday.

Yadav and Asha Devi echo the woes of tens of thousands of stranded migrant workers across the country, including in Mumbai where large crowds came out in Bandra on Tuesday clamouring to return to their villages.

Many complain there is no one to harvest their standing crop. Some said their families are being pushed to the brink with no money.

With their jobs gone, the crops could help them sustain themselves. However, losing the crop would mean certain starvation.

Gopesh Kumar, who works as a daily wager in farms in Haryana for Rs 400 a day, said he started working in a farm in Rohtak from March 15. When the lockdown began, the contractor he was working for suddenly asked him to go back.

Kumar, who belongs to Bareilly in Uttar Pradesh and is spending his days like the others at the Yamuna Sports Complex shelter, said time is running out.

'I can't earn till the lockdown ends. My family does not have money back home. Our entire standing crop of wheat has to be harvested. Who will do that?' he said.

'There would have been some relief if the lockdown was lifted. At least, I could have gone back home. But with the extension, I have to wait here for another two weeks,' he said.

Raju Kushwaha, 38, from Hathras in Uttar Pradesh, has the same question: How will my family, including three sons, survive if we can't harvest the crop. And if I am not there, who will do it?

Monu, 34, was planning to go home to his village in Hathras near Agra on Holi but stayed back in Delhi hoping to earn some more money so he could take his family for a pilgrimage to Rajasthan.

But that never happened and Monu, who works as a waiter, is now stranded, while his wife, mother and two young children are in the village.

'I had sent some money during Holi. But that was last month. Now there is no money left with the family,' he said.

'Due to the lockdown, I have not been able to earn anything for the past three weeks. With the extended lockdown, I will have no money for the next two weeks,' Monu said.

The Delhi government is feeding an estimated 7,00,000 people a day in its various camps. These include migrant labourers, beggars and other homeless people.