Wash feet of sanitation workers, but why was allocation for rehabilitating manual scavengers reduced by half? 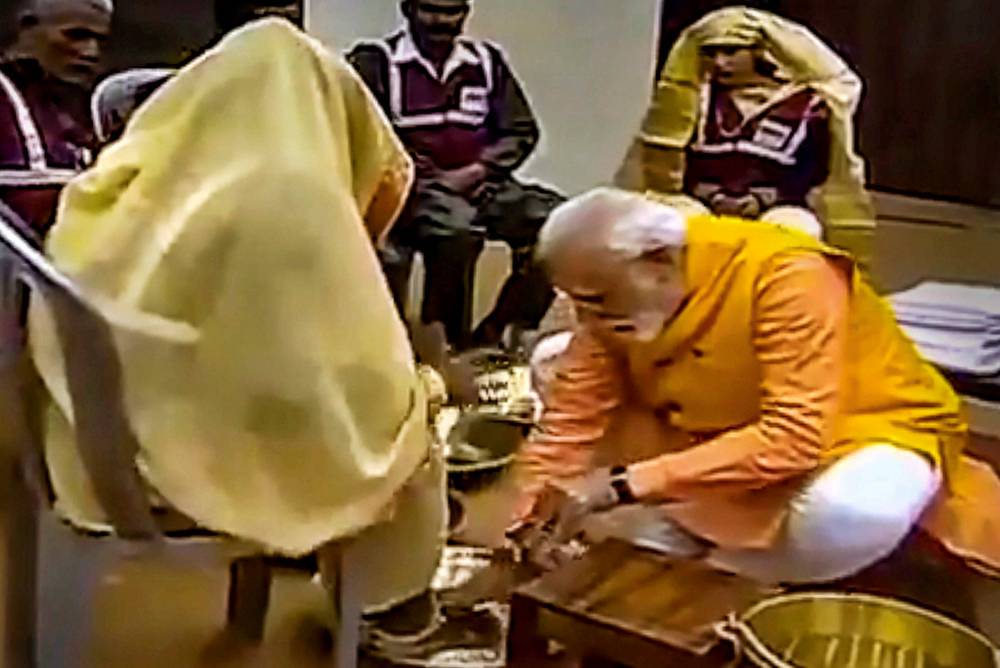 Wash the feet but slash the cash — that is the charge snapping at the heels of Prime Minister Narendra Modi after he self-promoted his gesture honouring five sanitation workers in Allahabad on Sunday.

It has now emerged that in the interim budget, the Centre has reduced by more than half the allocation for rehabilitating manual scavengers.

The funds, allocated under the Self Employment Scheme for Rehabilitation of Manual Scavengers, are meant to rehabilitate manual scavengers with alternative jobs.

Under a rehabilitation law, an immediate assistance of Rs 40,000 has to be given to a manual scavenger. Then the person has to be trained to become self-reliant and offered low-interest loans of up to Rs 15 lakh each for starting a venture.

Although manual scavenging was banned in the country in 1993, a survey has so far identified around 30,000 manual scavengers. The figure is expected to rise to 45,000.

An official of the Union social justice and empowerment ministry defended the allocation, saying the amount has been set aside keeping in view the spending required to meet the initial assistance of Rs 40,000 per person.

The official said 16,000 people had so far been given the first assistance but did not disclose details of the loans granted to them.

The figure suggests at least 14,000 people (excluding those not yet identified by the survey) are yet to be given any assistance. Most of them will have to depend on the new year’s reduced allocation.

If the 14,000 have to be rehabilitated, the initial assistance alone will require Rs 56 crore. Although the figure in the interim budget can be increased in the full budget later, the slash in the allocation stands out amid the government’s eagerness to pacify other aggrieved groups such as farmers.

More important, if the initial assistance is not immediately followed up with training and the grant of loans, the manual scavengers will never be able to claw themselves out and rehabilitate themselves.

Wilson said the Modi government had “no commitment” to manual scavengers. “Cleaning the feet of sanitation workers is nothing more than tokenism,” Wilson told The Telegraph.

On Sunday, Modi had washed the feet of five persons employed as sweepers by the Allahabad municipality, said the moment would remain with him and uploaded the image on his Twitter handle.

The gesture, ahead of the upcoming parliamentary elections, came in a state where the Valmiki community of sanitation workers account for a fifth of the Dalit votes in the heartland.

On the lack of data on loans granted to scavengers, the ministry official said: “The implementing agencies are state-level Scheduled Caste finance corporations. They are supposed to provide skill-training and encourage them to take loans under our loan scheme. But the response for jobs and loans is very low.”

Wilson said the government had not popularised the scheme for loans and skill-training. “The Prime Minister had spoken from the Red Fort on August 15, 2014, about making India clean by 2019. But the problem of manual scavenging has been perpetuated by this government. Going by the allocation, the government’s proposed spending is less than Rs 10,000 per manual scavenger.”

A dozen manual scavengers have died in the country in the past four months while working in sewer tanks without adequate precautions.

The ministries of finance and social justice and the National Safai Karamcharis Finance and Development Corporation did not officially respond to separate emails this paper had sent to understand the reason for the poor allocation and the strategy for implementing the scheme with limited resources.