10 years ago, he had said Valmikis stuck to their job not because of caste, but because of spiritual pursuit 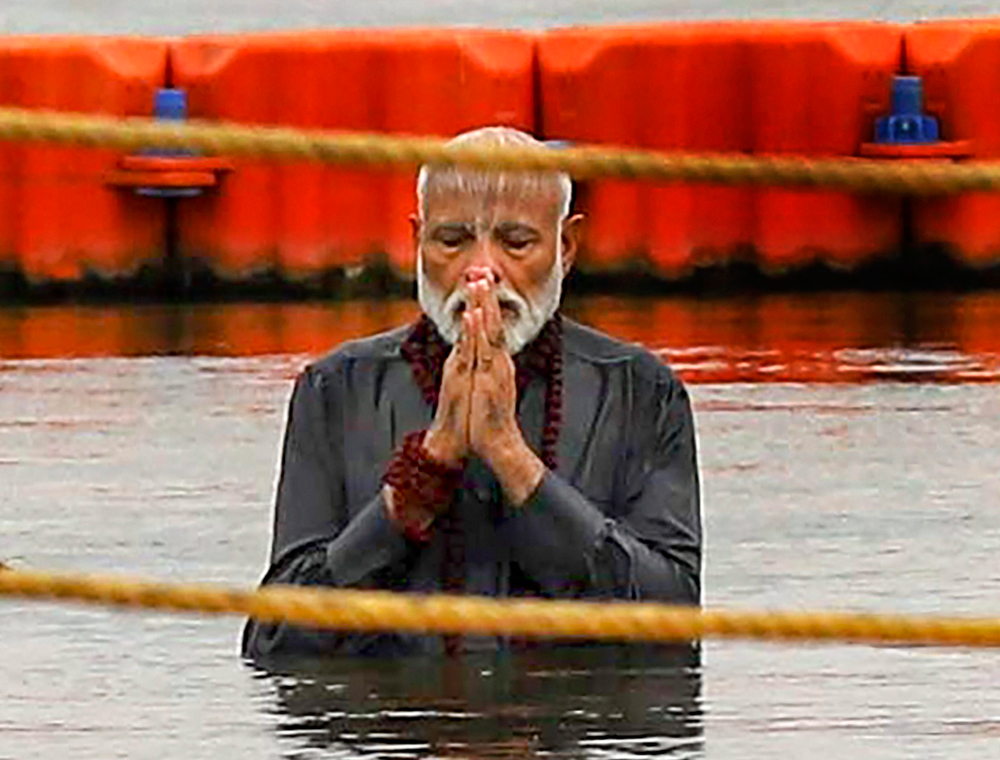 By going public with his decision to wash the feet of sanitary workers in Allahabad on Sunday, Prime Minister Narendra Modi appears to have unwittingly turned the spotlight onto his personal view articulated over a decade ago.

He had said that safai karamchars engage in cleaning jobs not because of the caste system that leaves them with no choice but as a spiritual pursuit.

In a collection of his speeches titled Karmayog — brought out by a Gujarat public sector undertaking in 2007 — Modi was quoted as saying: “I do not believe that they have been doing this job just to sustain their livelihood…. At some point of time, somebody must have got the enlightenment that it is their (Valmikis’) duty to work for the happiness of the entire society and the Gods; that they have to do this job bestowed upon them by Gods; and that this job of cleaning up should continue as an internal spiritual activity for centuries…. It is impossible to believe that their ancestors did not have the choice of adopting any other work or business.”

This was back in circulation on Sunday night after the Prime Minister himself posted a video of him washing the feet of five sanitary workers in Allahabad.

Dalit activists and politicians questioned his sincerity, given the condition of the socially disadvantaged sections of society under his watch.

He added: “Clean your mind not our feet, Mr. PM! Highest form of humiliation. 1.6 lac women still forced to clean shit, not a single word in five years. What a shame!”

Dalit activist and MLA Jignesh Mewani challenged Gujarat chief minister Vijay Rupani to make it a manual scavenging-free state. “The BJP is in power for more than 2 decades in Gujarat -- what have you done for the Dalits? Even the master jumlabaaz @narendramodi during his CM term has done nothing for us,” he tweeted.

The CPM, which has been admittedly slow in accepting that caste is an issue in India, also billed it as a publicity gimmick. “105 deaths in sewers and septic tanks in 2018 & 11 in 2019 alone. Nothing done to redress the grave situation despite Court Orders. PR photoshoots with multiple cameras only rub salt into the wounds of those suffering historical injustices,” tweeted CPM general secretary Sitaram Yechury.

Playing on the Oscars, the Trinamul chose to use the video posted by Modi as a peg for awarding him the “Oscar for Best Actor” while Mayawati took a swipe at his equally well video-graphed dip in the Ganga at the Kumbh.

“Will a ‘SHAHI’ dip in Sangam by PM Modi be able to wash sins of reneging poll promises, treachery & other state wrongs? Not possible for people to forgive BJP easily for making their life miserable through deeds of Notebandi, GST, Vengeance, Casteism, Communal & Authoritarian rule,” she tweeted.

Likewise, CPI(ML) Liberation said: “PMOIndia, it’s your job to ensure sanitation workers are paid dues, end manual scavenging & sewer deaths. Instead you are striking poses washing their feet! A sanitation worker died in #KumbhMela2019 due to negligence, will you speak on that?”