Why BJP's Hardeep Singh Puri ended his campaign in Attari 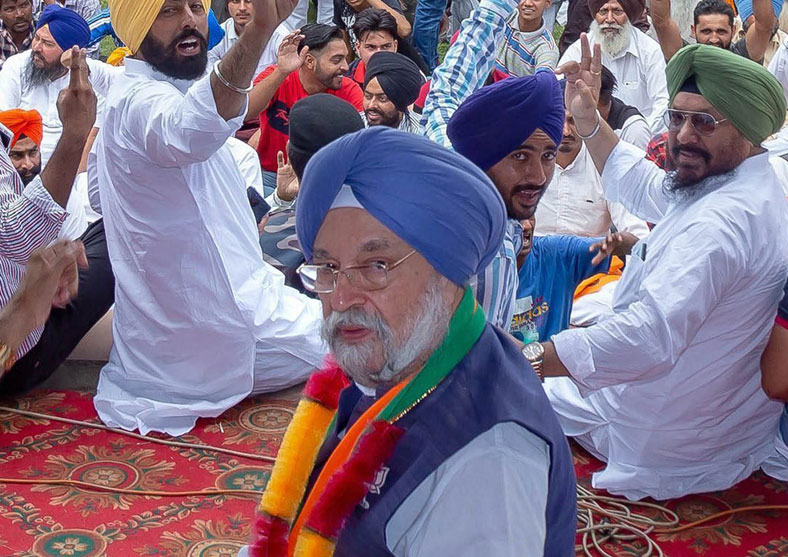 In a general election, where a hard line towards Pakistan has been demonstrably popular among large sections of voters, Amritsar stands out as an exception to this national mood.

Hardeep Singh Puri, the Union minister of state for housing and urban development, the BJP’s candidate in Amritsar, pointedly ended his three-week-long campaign on Friday in Attari, a mere 4km from the border with Pakistan. Attari is part of the Amritsar Lok Sabha constituency.

Support of traders in this constituency, who have been hit by the central government’s recent decision to hike customs duty on imports from Pakistan by 200 per cent, is essential if Puri is to win the Amritsar seat next Thursday.

The resentment among traders over the Narendra Modi government’s decision to withdraw the “most favoured nation” status to Pakistan following the Pulwama terror attack is in sharp contrast to the mood among other sections of society elsewhere in the country, which want more such actions to force the Army General Headquarters in Rawalpindi to end terrorism against India.

Puri has been campaigning hard to erase from the BJP’s copybook, Union finance minister Arun Jaitley’s humiliating loss in Amritsar by over 1 lakh votes in 2014 despite a Modi wave. In this effort, Puri released his “vision” for this constituency, which includes securing special status for Amritsar as a “border district.”

Puri said special status will “incentivise investment and job creation in addition to enabling increased entry for youth in Central Armed Forces. The way to go is a high-speed rail corridor between Amritsar and Delhi with the extension of a dedicated freight rail corridor up to the Attari border in order to create business infrastructure.”

Implicit in the proposal is an assumption that tensions with Pakistan are unlikely to ease with another Modi tenure as head of government and that border areas like Attari need to look for alternatives to what have been traditional ways of doing business with an inimical western neighbour. Puri’s vision also includes a dry port in the Attari area.

At Puri’s final campaign meeting in Attari, one speaker apologised on behalf of local people for not having elected Jaitley in 2014. He said if the Union finance minister had been their own MP, in the last five years Amritsar’s problems would have been attended to better. “We will not make that mistake again,” he assured Puri.

The Congress is caught on the horns of a dilemma on this issue, although it affects the livelihoods of a large number of people here. If the party were to criticise the decision to end MFN facilities to Pakistan, the BJP leadership was bound to brand Congressmen as being soft on Pakistan. It is a pattern that has become familiar in the discourse on neighbourhood foreign policy in recent years. This would immediately have put the party on the defensive outside Punjab.

Therefore the Congress candidate in Amritsar, its sitting MP, Gurjeet Singh Aujla, largely skirted the issue. Aujla’s campaigners felt all along that the cross-border difficulties of traders in Amritsar are a fallout of the Modi government’s policies and that it is for the BJP to deal with them. They sat pretty on them during the campaign.

The BJP’s strategy has been to campaign on the argument that whatever may be the problems that a border constituency faces, it is best to elect an incumbent minister who is likely to continue in government if Modi returns as Prime Minister. BJP president Amit Shah, who addressed a rally in Amritsar city in support of Puri, said as much. “I have visited 300 constituencies in this election. Wherever I go, I get a request to make their MP a minister. Here in Amritsar, I am giving you a minister. My request is to make him your Lok Sabha member.”

Former ambassador K.C. Singh, who has deep family roots in Punjab, said: “Unlike the rest of India, Punjab was divided twice. First during Partition, and then again in 1966, when Haryana was carved out of it. When Punjab was partitioned, its culture and many fine aspects of life suffered.”

K.C. Singh was in Amritsar to meet Puri, a batchmate of his in the Indian Foreign Service when this writer caught up with him. Along with him were two others who were part of the 1974 civil services batch as well. “Being landlocked, tension and conflict along its border or neighbourhood affect the people of Amritsar and their psyche. Punjabis want peace for their prosperity and well-being,” K.C. Singh said. “So the narrative on Pakistan is different in Amritsar and other border districts from parts of India where warmongering is popular.”

Kiranjot Kaur, a senior member of the Shiromani Gurdwara Parbandhak Committee, who was earlier its general secretary, explained that a generation of Amritsaris grew up on an entertainment diet of Pakistan Television in the 1960s and early '70s. “Television came to Amritsar much after Delhi. We could only get TV programmes from Lahore. They were very good as entertainment.”

Other Amritsaris of her generation recalled that Pakistani society had not been radicalised then as it is now. Many PTV programmes were pure entertainment which people here enjoyed. They never paused to consider that these were “enemy” programmes the way PTV transmissions are viewed now. Television inevitably created a special cross-border bond well after Partition, like between East and West Europe during the Iron Curtain era.

Indira Gandhi became aware during the 1971 Bangladesh war that people in the border districts of Punjab were extensively watching PTV and that it had the potential to influence viewers. The following year, Kiranjot recalled, Indira Gandhi visited Amritsar to inaugurate a Doordarshan telecasting station, making this district the second place in India to receive Indian TV signals, along with Mumbai. Seven other cities began receiving Doordarshan signals only in 1975.

On Friday, about 50,000 people on the Indian side viewed the daily military ceremony of lowering of flags on the Attari-Wagah border. About 10,000 people watched the ceremony on the Pakistani side. When the border gates opened for the Border Security Force and Pakistan Rangers personnel to drill side by side and shake each other’s hands, a deafening cheer went up from those in the stadiums on both sides. Nothing illustrates the spirit of Amritsar in the present day climate of border tensions with Pakistan as the roar that greets these men in uniform from both countries every day as they briefly interact with each other.

Pakistan's exports to India too low for MFN withdrawal to hurt