Who's on RSS magazine's cover? Gandhi

Critics have fumed, but the Sangh and BJP have worked since 2014 to appropriate Gandhi 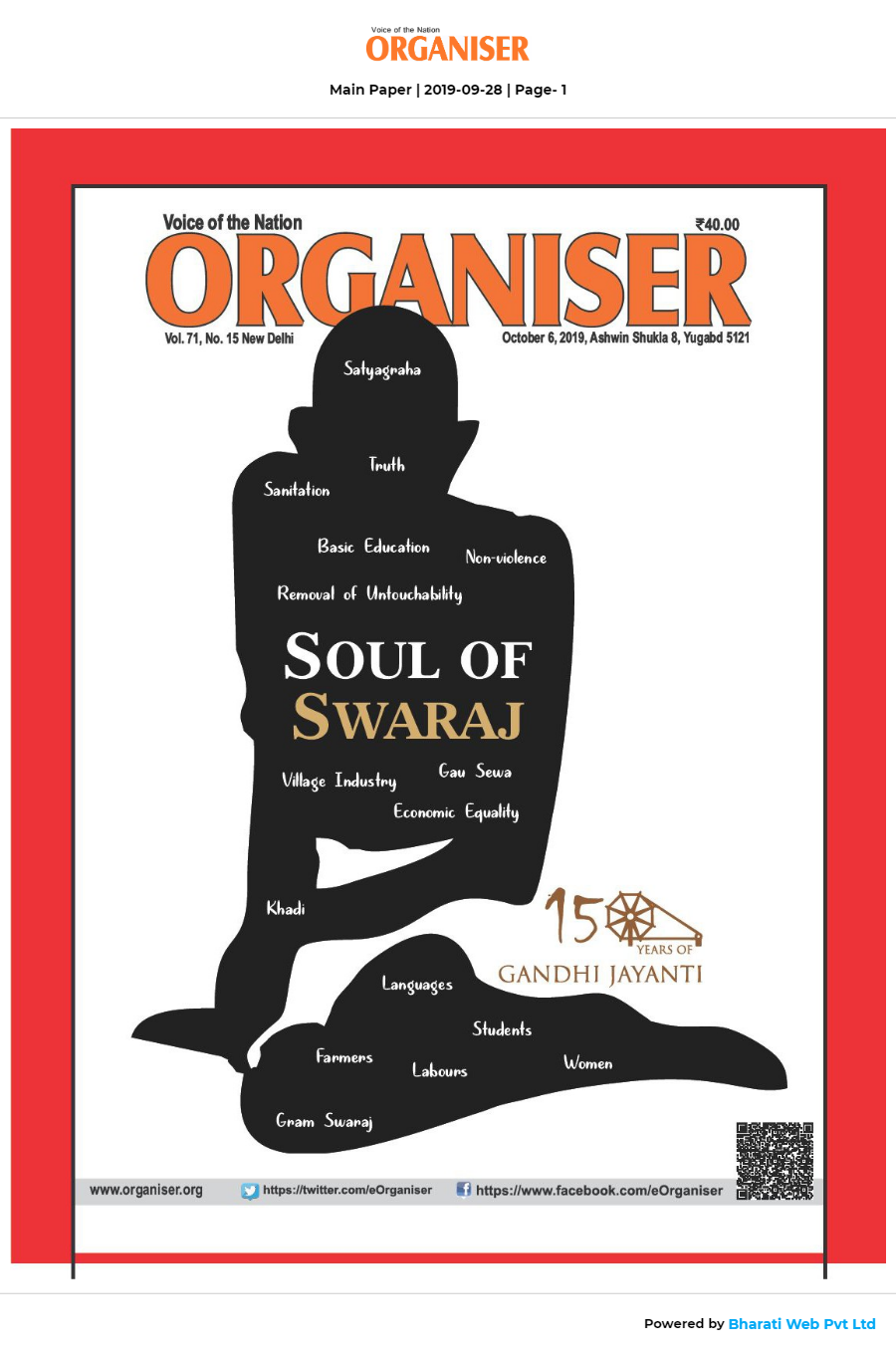 The October 6 issue of the Organiser magazine is headlined Soul of Swaraj, a special issue on Mahatma Gandhi on his 150th birth anniversary.

Critics of the RSS have fumed at the attempted 'appropriation' of Gandhi by the Sangh, but all road signs since 2014 have pointed in this direction - the Mahatma on the cover of the Organiser.

On October 2 that was the 150th anniversary of the Father of the Nation, RSS chief Mohan Bhagwat penned a piece on Gandhi in Organiser. He mentioned Gandhi’s visit to a Sangh camp near Wardha in 1936, and another one in Delhi during Partition. “Gandhiji expressed his joy over the discipline of the Sangh swayamsevaks and the complete absence of the divisive feelings of caste and creed in them,” Bhagwat wrote.

The same day, Congress stand-in president Sonia Gandhi accused the RSS and the BJP of appropriating Gandhi. “It is easy to take Gandhi’s name but difficult to follow in his footsteps,' Sonia said at Rajghat.

But Gandhi's name has been on RSS' and offspring BJP's lips since 2014. Gandhi is Prime Minister Narendra Modi's mascot in scheme campaigns, specifically the Swachh Bharat Abhiyan. Gandhi was also on his lips on foreign trips. In September 2014, Modi reminded hundreds of Indians packed in Madison Square Garden that Gandhi was a pravasi Bharatiya, just like them.

This Gandhi Jayanti, Modi wrote on the Mahatma in The New York Times. Bhagwat's Organiser piece was published by Hindustan Times.

There is, of course, enough literature on how the RSS and its co-travellers viewed Gandhi.

In Gandhi: The Years That Changed The World, historian Ramachandra Guha wrote that “Gandhi was ambivalent about the RSS; the Sangh, for their part, actively distrusted him”.

In The Telegraph, Guha wrote about what he found during his research in Delhi. “While working on my biography of Gandhi, I scoured the records of the Delhi Police for those crucial months, September 1947 to January 1948, when Gandhi was in New Delhi. I found several accounts of RSS meetings, where the Mahatma and Muslims were both venomously abused.”

Christophe Jaffrelot, a professor of Indian politics and sociology at King’s College, London, wrote about similar events in his book. In the book, Majoritarian State: How Hindu Nationalism Is Changing India, Jaffrelot referred to an intelligence report on a speech of Golwalkar and wrote that, “Violence, however, was legitimate not only against Muslims, but also against all those protecting them—such as Mahatma Gandhi, whom Golwalkar claimed was motivated by petty electoral intentions.”

BJP leaders and RSS ideologues continue to admire V.D. Savarkar, the Hindu Mahasabha leader who was a co-accused in Gandhi’s assassination plot but was acquitted. But in an article in the Organiser's October 6 issue, RSS leader J. Nandakumar has written about the “warm, respectful, and multi-layered relationship cherished by V.D. Savarkar and Gandhiji”.

Nandakumar wrote that baseless allegations against Savarkar were made after the Emergency. He wrote that Gandhi knew about the contents of the letters of clemency Savarkar wrote to the British from Cellular Jail but “it did not prevent him (Gandhi) from calling Savarkar ‘a faithful son of Bharat’ and 'brave'.”

This is not the first time the Mahatma has made it to the cover of the Organiser. In 2014, when the Swachh Bharat Abhiyan was launched on October 2, it carried a Gandhi sketch with a broom and a basket on its cover. “Mission (I)(m)possible” was written across.

The RSS has made its mission of appropriating Gandhi, whom it hated, look quite possible now.