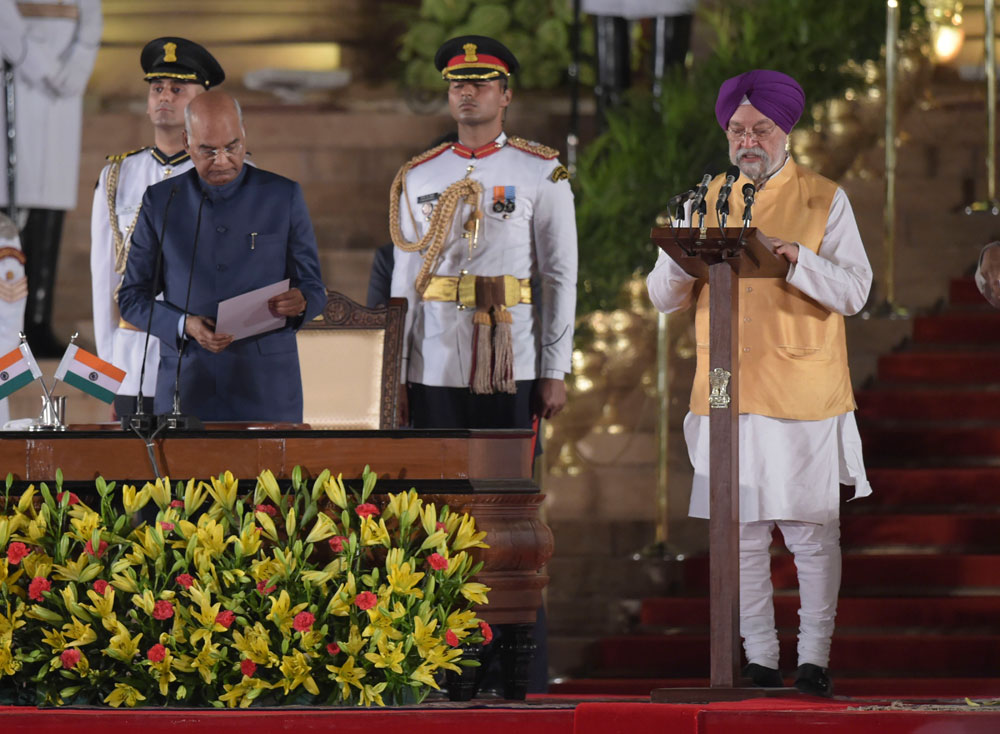 Traditional Indian wear with hues of saffron and use of Hindi language for oath-taking were the overriding themes at the glittering swearing-in of Prime Minister Narendra Modi and Union ministers of the new NDA government.

The mega event took place in the sprawling forecourt of the Rashtrapati Bhavan which was attended by heads of states of various countries and a galaxy of other high-profile guests.

Among the ministers who were sworn in, most of them chose to take oath in Hindi while the rest did it in English.

In a sartorial sense too, kurta-pyjama was the dominating theme as most of the MPs turned up in kurta-pyjama, colourful waistcoat or their traditional dresses, while a few chose to wear shirts and trousers.

The crowd cheered the most when Modi took his oath in Hindi and someone in the crowd shouted “Bharat Mata Ki Jai” just before he was sworn in.

Dressed in crisp pyjama-kurta and a grey waistcoat, Modi, who arrived at the venue at 7pm, greeted the people at the event with folded hands and a gentle bow as the crowd cheered him.

Even after he had taken oath, people continued to cheer Modi and chanted “Modi Modi”, “Jai Shri Ram” and “Har Har Mahadev”.

BJP chief Amit Shah and Smriti Irani, who will make the transition from being Rajya Sabha members to that of Lok Sabha, were also greeted enthusiastically by the crowd when they came to take oath in Hindi.

Hardeep Singh Puri was sworn in as a minister of state (independent charge), and was greeted with cheers of “Jo bole so nihaal” as he took oath in English, wearing a light orange waistcoat over a kurta-pyjama accessorised with a mauve-coloured turban.

A couple of MPs were corrected by President Ram Nath Kovind during the swearing-in for error of omission and mispronunciation of words.

MPs Mansukh Mandaviya (was Rajya Sabha member from Gujarat), G. Kishan Reddy (Secunderabad, Telengana), Faggansingh Kulaste (former minister of state for health in the previous Modi government), Angadi Suresh Channabasappa (Belagavi, Karnataka) and Nityanand Rai (Ujiyarpur, Bihar) were pointed by the President when they either forgot to utter a word or mispronounced it.

Ex-servicemen wearing ceremonial hats were also seen in the audience.

The ceremony also saw many MPs donning their traditional wear for the event with white kurta-pyjama being sported by most of the newly elected lawmakers, topped with a saffron waistcoat, while five of the women MPs who took oath — Smriti Irani, Nirmala Sitharaman, Sadhvi Niranjan Jyoti, Debasree Chaudhuri, Renuka Singh Saruta — wore saris, while Harsimrat Kaur Badal wore a Punjabi salwar suit.