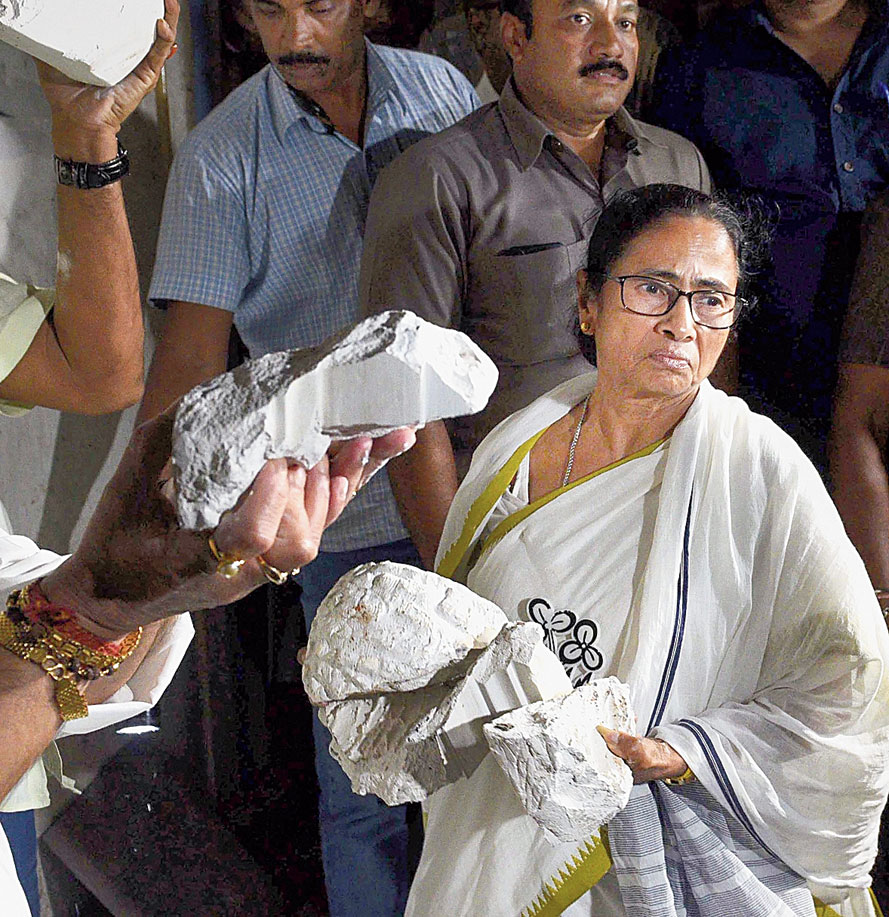 In Satyajit Ray’s timeless masterpiece Hirak Rajar Deshe, the tyrant king is seen implementing a carefully graduated programme to erase scholarship and intellectual pursuit in his kingdom by first shutting down schools, then burning entire libraries, and finally brainwashing his subjects in the iconic “jantar mantar room”. The Master was clearly ahead of his time, whether in terms of foreseeing the recent re-writing of history textbooks in India, or predicting the barrage of mind-numbing fake news articles being constantly shared on the Facebook-WhatsApp University Ltd. franchise — the modern-day jantar mantar room — as part of a multimillion dollar prime ministerial campaign.

At the end of the movie we see the rebellious subjects pull down the tyrant’s statue and smash it to smithereens. It is an iconic moment, for it underlines the importance of symbols in our world — the fallen statue of the monarch stands for the fall of an idea, and an era. The destruction of Ishwarchandra Vidyasagar’s statue by a saffron-attired group on May 14 at Vidaysagar College in Calcutta too was not an isolated incident. Desecrating Vidyasagar, one of the pioneers of intellectual life in Bengal, is part of the greater systematic attempt to destroy and dismantle the multicultural fabric of the country in order to impose the religious-cultural narrative built around Sri Ram, because that is what has been, historically, the BJP’s signature political calling card.

Let us for a moment put aside the oft-repeated question of what the BJP means for the Muslim population of this country, and instead consider what they bring to the table for the Hindus. The majority Hindu population of India is by no means a homogeneous body. It is beautiful in its myriad differences over language, food, deities, customs and rituals. This presents a flea in the ointment for the BJP because their chief electoral strategy has always been to consolidate the Hindu vote. Their politics being religion-driven and Ram-centric, it is thus the BJP’s political compulsion to engage in cultural appropriation to step-by-step erase the local differences in Hindu religious-cultural-social life & practice, and establish a homogenised, Ram-centric religio-cultural narrative. The agenda is quite clear. Once the populace embraces that shift, they will start to identify and associate the BJP with their way of life, leading to ease in future electoral battles. The aspirational “Hindu Rashtra” is quite literally meant to be a BJP fiefdom.

The BJP has nothing against Vidyasagar. But if the Hindu-majority electorate of India remain true to their allegiance to different regional religious, cultural, educational, and intellectual icons, then it becomes difficult to unify them into a singular vote bank based on their religion. Because then, they will start to focus on diverse and individual issues while taking a call on which way to vote. Thus, unification of the Hindu electorate is crucial to the BJP’s electoral strategy of dividing the nation based on religion and riding to power on the back of muscular, religion-driven nationalism which conjures the image of the BJP in the electorate’s collective conscience. Naturally, local and iconic symbols of tolerance and inclusiveness must be demolished. Vidyasagar, Ambedkar and Ramaswamy were just collateral damage.

If you are a razor-minded Tamil Brahmin, or a poetry-loving Bengali Kayastha, or a fiercely independent Marathi, you likely do not fall within the cohort that will readily identify with the “Ram-mandir nationalism” of the BJP. If you travel hundreds of miles to worship at the Guruvayur temple, or get emotional at Babughat during bishorjon on Vijaya Dashami, it is unlikely you will get charged up at the spectacle of trishul-wielding rightist electoral processions, which has now become symbolic of The Party. Thus, it is not good enough for you to be merely a Hindu anymore; you must identify with the brand of ultra-radical Hinduism, also known as “Hindutva,” that is championed by the BJP. And if you resist, then Big Brother is watching. And ready to pack you off to Pakistan.

This is how cultural appropriation has taken place throughout history, since time immemorial. The existing cultural landscape must be first desecrated before a new one can replace it. Whether with the native American population in North America, Hitler in Germany, before disintegration of the USSR, or in South American banana republics, cultural whitewashing and intellectual invasion to induce an amnesia-like state must necessarily precede political invasion in the modern world. Always. Whether by means of doctoring NCERT history textbooks or building/demolishing statues. The Modi-Shah combine understands this reality, and to them Bengal truly represents, to quote Steve Waugh, “The Final Frontier.” Home to a historically proud and politically educated hive-mind, the land of reformers, and the soil which gave birth to not only the national anthem but also the national song as well as the ubiquitous slogan “Jai Hind”; this state presents the ultimate challenge in the face of the socio-cultural ethos-bulldozing juggernaut that is the BJP. They have been able to successfully implement this strategy combining fear, reverence and love of the deity — what is colloquially called bhoy-bhakti-bhalobasha in Bengali — in other states such as Uttar Pradesh. But Bengal isn’t Uttar Pradesh. And her chief minister isn’t like any other.

Thus, the unbelievable focus on Bengal by the party top brass, beyond the mere numbers game centred around the third-highest Lok Sabha seat share in the country. Bengal is no stranger to electoral violence. Established during 34 years of Leftist iron rule, the tradition of conflict during polling continues. However, the disproportionate unrest during these elections is no accident. It is a necessary tool, designed to generate a perception of lawlessness beyond a watershed — which is such a useful backdrop if one wishes to involve the school headmaster in order to discipline the most stubborn kid in class!

The greater, unfortunate “side effect” of such “BJP medication” is the danger of gradual erasure of the multitude of unique regional identities and flavours that go into creating the “Idea of India” — a pluralistic land of more variety than any other, steadfast and strong in its Unity in Diversity.

I’m sure that if Sri Ramchandra were alive today and witnessed how his name was being used in this game of thrones to attack Hindu multiculturalism in India and create a divide with other religions, he too would say, #NotToday, #NotInMyName.