Advertisement
Home / India / What a picture tells us

What a picture tells us 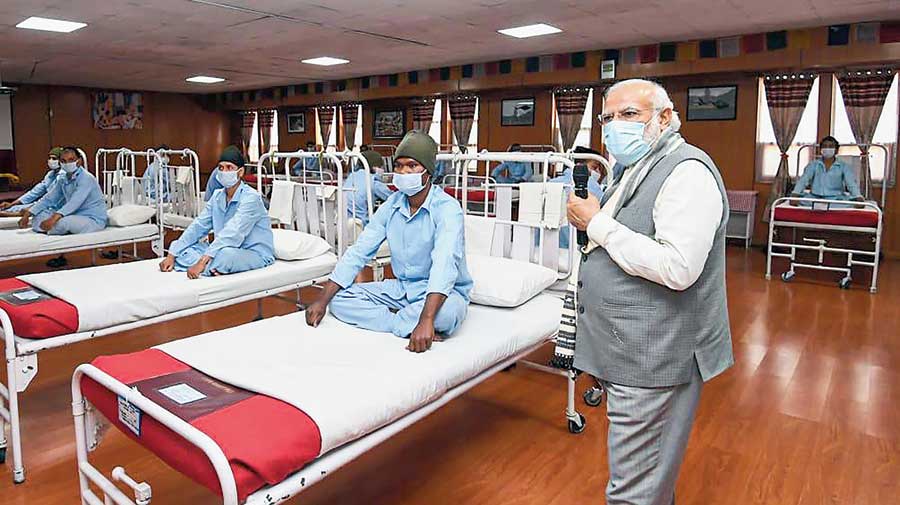 When the country was carpet-bombed on Friday with mostly handout images of Prime Minister Narendra Modi looking up injured soldiers at a cavernous, panelled room with a suspended projector and a screen at Leh, many wondered why it appeared more like a conference room than a hospital ward.

But suggestions that it was a make-believe or Potemkin hospital have been dismissed by the Indian Army through an official statement on the facility at the General Hospital in Leh.

“Hence, this hall, which otherwise was normally used as a Training Audio Video Hall, was converted into a ward ever since the hospital was also designated as a Covid treatment hospital.”

It added: “The injured braves have been kept there since their arrival from Galwan (after the June 15 clash with Chinese soldiers) to ensure quarantine from Covid areas. The Chief of Army Staff, General M.M. Naravane, and the Army Commander have also visited the injured braves in the same location.”

The government had on Friday released photographs and a video clips showing Modi visiting what it said was a hospital ward for troops injured in the June 15 Galwan Valley clash that killed 20 Indian soldiers and wounded 76.

On Saturday, the army was compelled to issue a statement because of what it described as “malicious and unsubstantiated accusations in some quarters regarding the status of the facility visited by the Prime Minister”.

If a photograph is said to be worth a thousand words, the propaganda photographs (and a video clip) from the facility stand out for what they have unwittingly revealed about the state of the nation.

⦾ First, the intense scrutiny that the pictures were subjected to by some social media users, including military veterans and former journalists, stood out in sharp contrast with the manner in which large sections of the media have become extended propaganda wings of the government.

At a time most of the mainstream media as well as television bullrings have been swallowing government accounts, especially on national security, the vacuum is being increasingly sought to be filled by individuals on social media who view the government’s and the media’s versions with mistrust.

Some of their questions may fall into a category that the government would like to label as “wild” or “irresponsible”, but restraint will be a casualty when traditional avenues of expression are no longer available.

Such was the scepticism and mistrust that greeted the pictures of the Prime Minister with the soldiers at the facility that the hashtag #MunnabhaiMBBS (a reference to a blockbuster movie based on a gangster with a fake medical degree) began drawing attention on Twitter.

A former civil servant tweeted: “It is said to be a conference hall hurriedly staged as a patients’ ward. Never expected Munnabhai culture to infect a great organisation like the army…. Onus on army top brass to protect the institutional ethos.”

Even veterans who welcomed the Prime Minister’s visit to Nimu expressed doubts. A retired colonel tweeted: “The layout of a medical ward is not like this.... What is projector doing in a medical ward? If this picture is true, then there is no doubt.... It is staged-managed.… Big shame.…”

Others underlined that no soldier “seems to have external injuries needing any bandages” and wondered how they were able to “sit straight up”.

One social media user could not help but quip: “Munnabhai forgot to arrange dustbin, drip and oxygen stand to give a perfect look to fool his parents.”

All these charges have plausible explanations: at least one soldier in the picture did have a bandage over an eye; these soldiers could be those who had suffered minor injuries and had recuperated enough to sit up straight (the posture adopted when an officer is present if the patient is capable of doing that); and recuperating patients need not always require oxygen cylinders.

⦾ The communication strategy of the Narendra Modi government on China lies in tatters. More than once, statements or events involving someone no less than the Prime Minister have required clarifications issued overnight or within hours.

On Friday morning, an impression was created that Modi had visited a forward location even though Nimu was at least 200km from the China border. Later in the day, an official statement steered clear of the phrase “forward location” but did not issue any clarification as the army did on Saturday about the hospital.

While handing out the hospital pictures on Friday, the government or the army could easily have included in the communication what the army said on Saturday about the facility. Information on “need-to-know-basis” works in the services, not among sceptical civilians.

⦾ The alacrity with which the army has responded suggests an eagerness to save the face of the executive leadership. The same swiftness is not seen when citizens ask far graver questions. Nearly 20 days after the army lost 20 soldiers, it has still not revealed how many Chinese troops were killed on June 15 night.

⦾ A riddle still lingers: which country did the Prime Minister have in mind when he said at Nimu on Friday that “the age of expansionism (vistarvad) is over; this is the era of development; history is witness that expansionist forces have either lost or were forced to turn back”?

If the nation assumes he meant China, is there any guarantee that there will not be another official clarification overnight?