Advertisement
Home / India / We keep ourselves away from politics: General Rawat

We keep ourselves away from politics: General Rawat 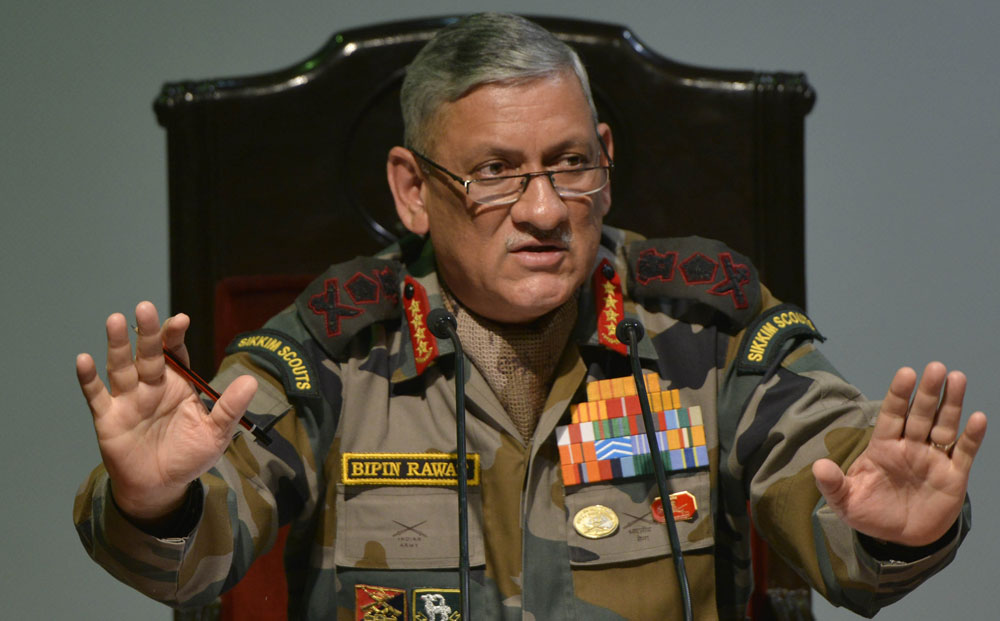 Newly-appointed Chief of Defence Staff (CDS) General Bipin Rawat on Wednesday said the armed forces stay far away from politics and work as per the directives of the government in power, remarks that come amid allegations that the forces were being politicised.

He also said that his focus as the CDS will be to integrate the efforts of the three services and to work as a team.

'I want to assure you, that the Army, the Navy and the Air Force will work as a team. The CDS will keep control over them, but action will be taken through teamwork,' said Gen. Rawat after receiving a Guard of Honour by the three services.

Asked about allegations that the Army was being politicised and questions being raised by the Congress over the creation of the CDS' post, he said, 'We stay away, we stay far away from politics. We work on the directives of the government in power.'

The Congress on Tuesday had raised several questions over the appointment of Gen. Rawat as the CDS, saying the government has started on a 'wrong foot'.

Some Opposition politicians have accused Gen. Rawat of having political leanings.

Gen. Rawat, who took charge as CDS on Wednesday, said his focus will be to ensure best and optimal use of resources allocated to the three services.

'The task cut out for the Chief of Defence Staff is to integrate the three services and enhance their capability. We will continue working towards that,' he said.

'The CDS will not try to run a force by his directions. Integration is needed. We have to ensure that 1+1+1 combine of the three services adds up to 5 or 7 and not 3. You have to achieve more through synergy and integration, that is the aim of the CDS,' Gen Rawat said.

Apart from giving attention to integration and joint training, he said efforts will be made to ensure uniformity and integrating of systems for procurement so that the Army, the Navy and the Air Force can work in coordination with each other.

Asked about establishment of theatre commands, Gen. Rawat said, 'There are methods of doing theaterisation, I think we all are copying western methods and what others have done. We can have our own systems. We will work out mechanisms through understanding with each other and I think it will work.'

On the government's time line of three years for achieving integration between the forces, the CDS said it was possible and he will strive to achieve it.

Asked about the killing of two army personnel in a gunfight with heavily-armed Pakistani infiltrators along the Line of Control (LoC) in Jammu and Kashmir's Rajouri district, he said he would not like to comment on it.

'Plans are not made open to public. Don't want to comment on that,' he said when asked if there were plans of the three services acting on Pakistan-occupied Kashmir (PoK).

Gen Rawat also said that he would remain neutral to the three services as the CDS.

'My head is feeling lighter because, I have had to take off that angled Gurkha hat that I have been working with for 41 years, I have come back to this peak cap that I am wearing which is to say that we are now neutral. Will be neutral to all the three services,' he said.

Asked about the challenges on the northern border and China's actions there, the general said the Army will continue to work through integrated efforts.

Gen. Rawat, with a distinguished career behind him, retired from the post of the army chief on Tuesday after a three-year tenure. On Monday, he was appointed India's first CDS.

He will be able to serve as the CDS for a period of up to three years after the government amended the rules extending the age of retirement to 65 years.

The cabinet committee on security had, in a landmark decision last week, approved the creation of the CDS, who will act as the principal military adviser to the defence minister on all matters relating to tri-services.

A key mandate of the CDS will be to facilitate restructuring of military commands for optimal utilisation of resources by bringing about jointness in operations, including through establishment of joint/theatre commands.