Call for special status for Ladakh 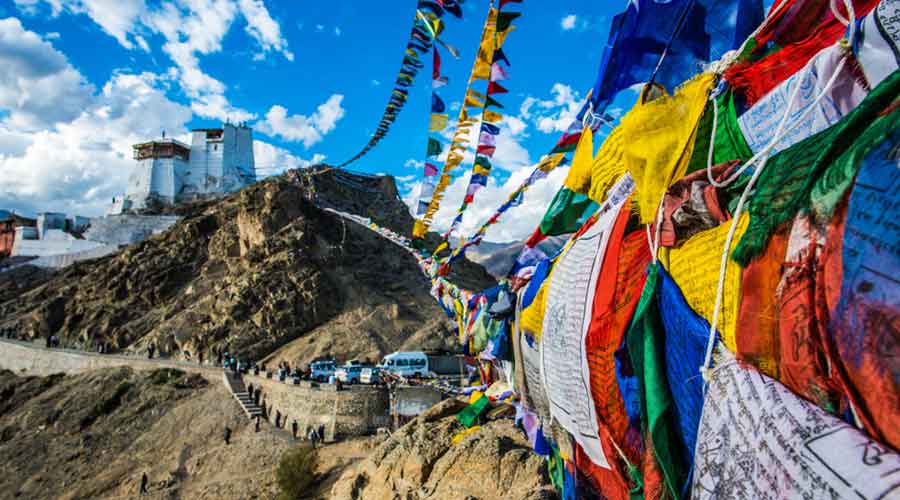 Ladakh’s Buddhists had celebrated last year’s revocation of the special status of Jammu and Kashmir — which then included Ladakh — and its bifurcation into two Union Territories
File picture
Muzaffar Raina   |   Srinagar   |   Published 24.09.20, 01:54 AM

The political and religious leaderships in Buddhist-majority Leh have decided to boycott next month’s hill development council polls to press for special status for Ladakh, the move carrying echoes of Kashmir and undercutting the BJP’s “integration” theory.

Ladakh’s Buddhists had celebrated last year’s revocation of the special status of Jammu and Kashmir — which then included Ladakh — and its bifurcation into two Union Territories. But now, like the Valley, Ladakh is bristling with suspicion about a possible invasion of “outsiders” from “mainland India”.

Ladakh’s Muslim-majority region of Kargil always resented the scrapping of Article 370 and, like Kashmir, wants it restored. While Leh does not favour the article’s restoration, it wants back the guarantees over land and jobs that the article provided to the native population.

It fears that the Centre plans to bring in a domicile law for Ladakh that will open the door to “outsiders”, as has happened recently in Jammu and Kashmir, and insists that Ladakh be brought under the Sixth Schedule.

Tensions are therefore flaring up in Leh at a time war clouds are hovering over eastern Ladakh, with the Chinese army intruding into India-claimed territory at multiple places.

The recently floated People’s Movement for Sixth Schedule for Ladakh, made up of all the major political, social and religious bodies in Leh, on Tuesday announced the boycott of the October 16 elections to the Ladakh Autonomous Hill Development Council, Leh.

The apex body of the movement has “unanimously resolved to boycott” the polls “till constitutional safeguards under the Sixth Schedule on the lines of the Bodo Territorial Council (in Assam) are extended” to Ladakh, former Lok Sabha MP Thupstan Chhewang told reporters in Leh.

This is to be the first election in the new Union Territory of Ladakh since the scrapping of Article 370. The current body in Leh is headed by the BJP. Kargil has its own Ladakh Autonomous Hill Development Council, where elections are three years away.

Earlier, the National Conference, People’s Democratic Party and other Valley-based groups had boycotted the municipal and panchayat elections of 2018 and 2019 in protest at the Centre’s perceived plans to scrap Article 370.

That boycott had allowed the BJP to win many more seats than it would normally have in the Valley. However, the Leh boycott call has raised the possibility of the elections being put off.

The boycott call comes at a time Ladakhi environmentalist and Magsaysay Award winner Sonam Wangchuk has sounded an alert about the possibility of a separatist movement in Ladakh if the region’s identity and environment concerns are not addressed.

Nawang Samstan, the BJP’s Leh unit president, was among those who signed Tuesday’s poll boycott pledge, his stand reflecting how the party’s local leadership was willing to defy the central leadership on the issue.

Many in Ladakh believe that a recent resolution by the Leh autonomous council — seeking privileges for Ladakh under Article 371, the Sixth Schedule or domicile laws — was passed at the Centre’s behest with the BJP Lok Sabha member from Ladakh, Tsering Namgyal, playing a key role.

Ladakhis are fiercely opposed to the domicile law or Article 371 — in force in many northeastern states — being extended to the region, fearing they could open the floodgates for outsiders.

Sources in Ladakh said the Centre intended to extend the domicile law to Ladakh as it had done in Jammu and Kashmir, where thousands of outsiders have been granted domicile.

Chhewang, who resigned from the BJP in November 2018, hoped that Ladakhis would not only boycott the upcoming polls but desist from even filing nomination papers. Nominations can be filed between September 21 and September 28.

“We are confident we will get full support from the entire population. Our struggle will continue until our demands are met,” Chhewang said.

Three Leh-based Muslim and Christian organisations too signed the pledge.