Advertisement
Home / India / 'Wanted to join the Army, but could not due to family difficulties,' says Rajnath Singh

'Wanted to join the Army, but could not due to family difficulties,' says Rajnath Singh

'Meeting army personnel gives me a sense of pride' 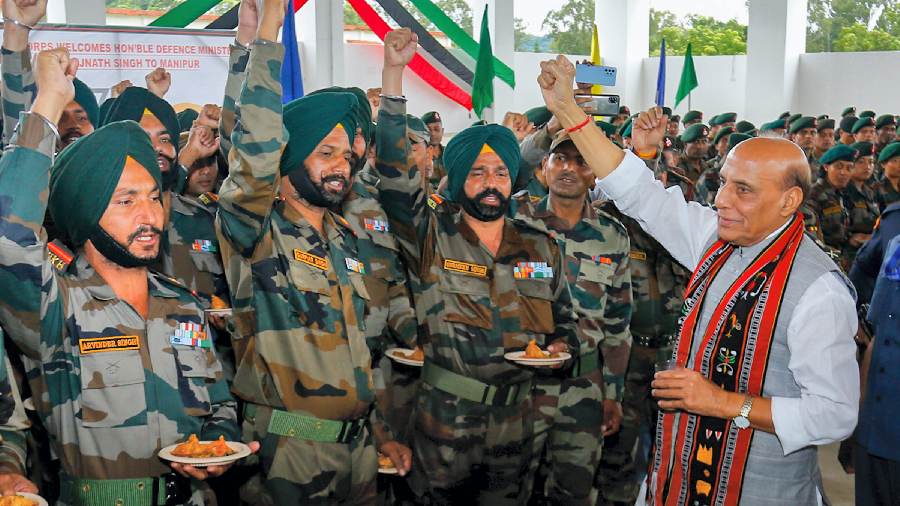 Defence Minister Rajnath Singh on Friday said that he wanted to join the Army but could not due to difficulties in his family.

Addressing the personnel of the Assam Rifles and 57th Mountain Division of the Indian Army here, Singh recounted how he appeared for the examination to get into the forces.

"I want to share a story from my childhood. I also wanted to join the Army, and once I appeared for the examination of the Short Service Commission. I gave the written exam. But, because of certain situations in my family, including the death of my father, I couldn't join the Army," he said.

"You will see, if you give the Army uniform to a kid, his personality changes. There is a charisma in this uniform," he said in the same vein.

The minister was accompanied by Army chief General Manoj Pande during the visit to the headquarters of the Inspector General of Assam Rifles (South) in Mantripukhri where they met the troops.

Singh recounted the valour shown by the security forces during the India-China standoff.

"When the India-China standoff was going on, you may not know all the details, but I know and the army chief of that time knows the gallantry and courage shown by our jawans, the country will always be indebted to you," he said.

"Wherever I go, I make sure that I meet armymen. When my Manipur visit was planned, I had asked (army chief) Pande-ji that I would like to meet the troops of Assam Rifles and the 57th Mountain Division," Singh said.

Meeting army personnel gives me a sense of pride, he added.

"Although doctors, engineers and chartered accountants are contributing to the nation in one way or another, I believe your profession is more than a profession and more than a service," Singh said.

Noting that the Assam Rifles plays a major role to bring many people into the mainstream, the minister said that the force is rightly called the sentinel of the Northeast.

Singh was on a two-day visit to Manipur.