The clinical trial protocols raise the question: how did minister Vij know he would receive Covaxin and not the placebo 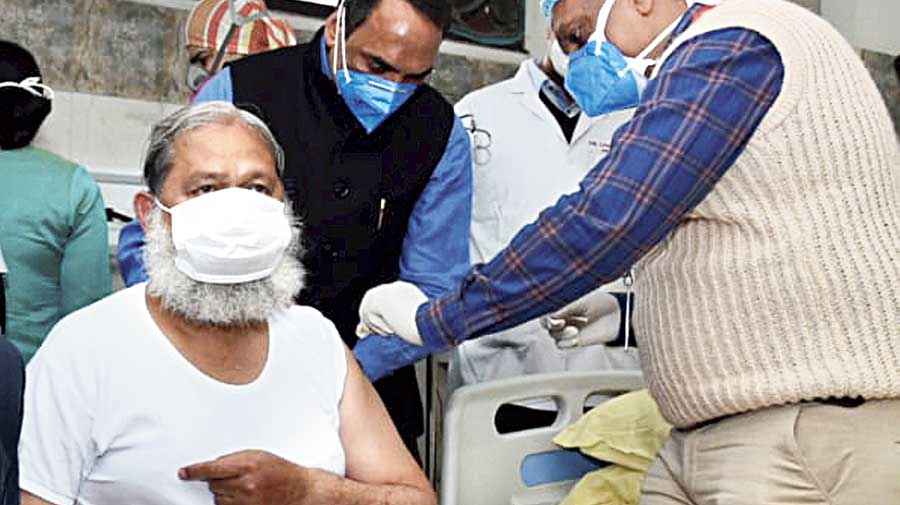 A Haryana minister’s tweet two weeks ago and a Union health ministry message on Saturday identifying him as a recipient of a candidate Covid-19 vaccine has puzzled experts who described them as possibly irresponsible statements or breaches in clinical trial protocols.

Haryana health and home minister Anil Vij had tweeted that he would receive on November 20 a dose of Covaxin, a home-grown candidate vaccine from Hyderabad-based Bharat Biotech, stirring surprise as protocols disallow recipients from knowing whether they are receiving a vaccine or a placebo.

Vij announced on Saturday — again via Twitter — that he had tested positive for Covid-19, prompting the social media platform users to speculate about the vaccine’s efficacy and the health ministry to circulate a message saying the minister had taken “only one dose of the vaccine”.

“The antibodies against the infection build up only after a specific number of days pass after the second dose is taken. Since this is a two-dose vaccine. (The) minister in question has taken only one dose of the vaccine,” the ministry said in a message circulated to reporters.

Researchers feel the episode illustrates how desires by India’s VIPs to associate themselves with the high-profile Covid-19 vaccine trials can sometimes raise questions about the integrity of the trial protocols.

Medical experts said there was nothing surprising about a volunteer in the clinical trial developing Covid-19 but could not explain how the minister and the health ministry had claimed he had received the vaccine.

“In a double-blind, placebo-controlled trial, neither the trial investigators at the site nor the recipients know who is getting the vaccine and who is getting the placebo,” said Santanu Tripathi, a senior clinical pharmacologist in Calcutta who is familiar with trial protocols but was not associated with this trial.

The protocols thus raise the question how minister Vij knew he would receive the vaccine and not the placebo.

Experts say it is possible that Vij did not know but assumed that he would receive the vaccine and tweeted about it without understanding its implications.

“Sometimes, trial participants develop the misconception that they would receive the vaccine and not the dummy placebo,” Tripathi told The Telegraph.

“But this represents a failure of the mandatory informed-consent process ahead of the trial which is supposed to clearly convey to participants that they have an equal chance of receiving either the vaccine or the placebo.”

The health ministry did not respond to queries asking how it had claimed that Vij had received a vaccine dose.

Under standard protocols for multi-centred clinical trials, the randomisation codes that assign the vaccine vials to certain volunteers and the placebo vials to others are maintained at a central site coordinating the trials and are not shared with the trial sites. “No one at the trial site knows who’s getting the vaccine,” the experts said.

Bharat Biotech issued a statement on Saturday underlining that the trial was a “double-blind study” where the volunteers have a 50 per cent chance of receiving either the vaccine or the placebo.

Health researchers say the minister’s infection could be easily explained through multiple mechanisms. No candidate vaccine is expected to be 100 per cent effective. The most promising Covid-19 vaccines so far have shown protective efficacies of about 95 per cent, implying 5 per cent remain unprotected.

A clinical trial specialist said that any participant who has been told whether they had received a vaccine or a placebo should not be included in the final data analysis of the trial.

Politicians in some states have offered to “inaugurate” the trials. In Karnataka, health minister K. Sudhakar graced the inauguration. In Bengal, governor Jagdeep Dhankhar inaugurated the trial while minister Firhad Hakim joined as a volunteer.