Mamata casts herself as the protector of Bengali identity 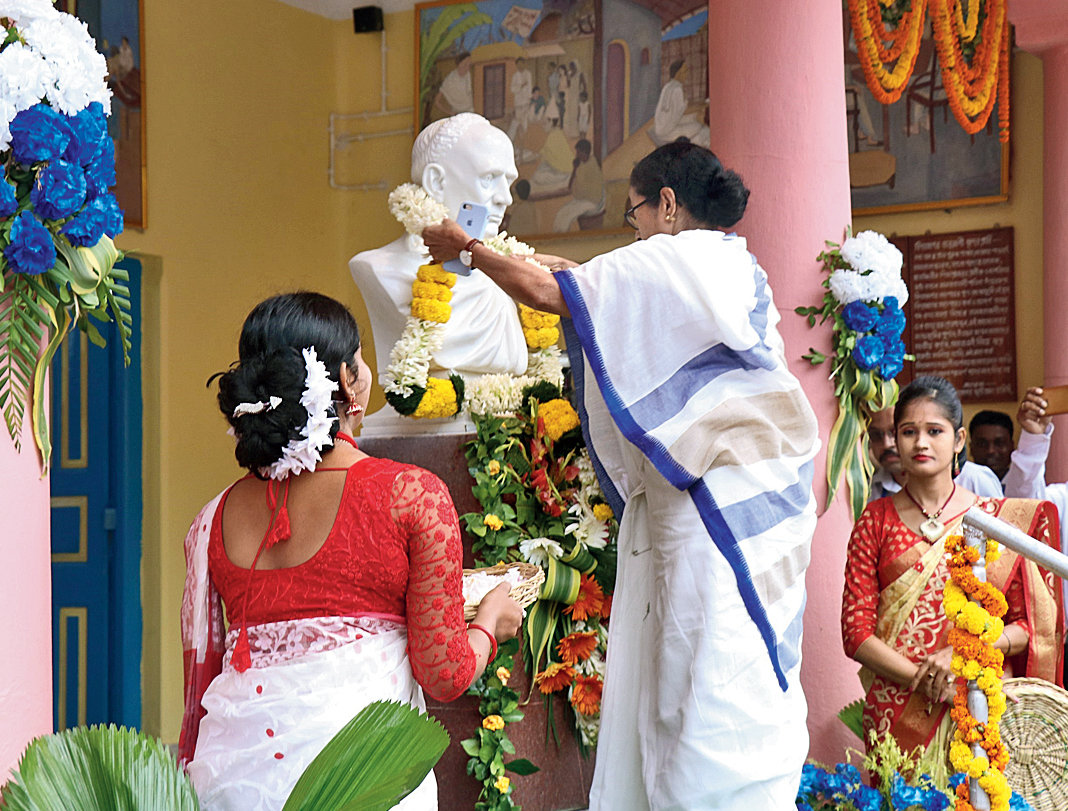 Chief minister Mamata Banerjee used the birthplace of Iswar Chandra Vidyasagar to cast herself as the protector of Bengali identity and launch a veiled attack on attempts to thrust Hindi across the country and enforce an NRC-like exercise in Bengal.

“You can go anywhere in the world, but you cannot forget your motherland and the Bengali identity,” the chief minister said at a programme held on the Birsingha Bhagabati Vidyalay campus, around 120km from Calcutta.

She was at the village of Vidyasagar to attend a government programme on the eve of the polymath’s bicentenary birth celebrations on Thursday. The education department is organising week-long celebrations on the occasion across academic the institutes in Bengal.

Mamata seized the opportunity to send out the message that she would try her best to protect the people of Bengal from persecution in the name of the NRC, the National Register of Citizens.

“Those who are living in Bengal for years do not have any reason to feel scared. No one can drive you out of Bengal. I am telling you without any ambiguity,” Mamata said at the programme.

“Some people are spreading lies and telling people that they have to produce documents prior to 1971 to prove their Indian citizenship. These are all misinformation,” she added.

Sources close to the chief minister said that she was “very upset” with the reports of NRC-related panic in the state. The state government is launching an audio-visual campaign — with a detailed message from her — to assuage the concerns of people, especially Muslims living along Indo-Bangladesh border, over an NRC-like exercise in the state.

“Vidyasagar fought against lies, superstitions and age-old practices…. He ensured education for women, fought against child marriage and played a key role in passing widow remarriage act. He had also curated our dear Bengali language by giving us Barna Porichoi…. He had shown the society light,” she said.

It was clear that she was referring to Vidyasagar’s reformist attempts — that played a key role in Bengal’s Renaissance — to stress that the time has come to launch another movement against saffron orthodoxy by asserting the Bengali identity.

The issue of Bengali identity has always been close to Mamata’s heart, but she probably realised its political might in the last phase of Lok Sabha election held on May 19.

The last leg was held after the vandalism of Vidyasagar bust, in which Trinamul bagged all the nine seats.

The fact that the state government is celebrating the polymath’s 200th birthday with such pomp, some insiders think, is the fallout of that realisation.

Over the last few months, one of the key aspects of Trinamul’s politics has been to portray the BJP as a party from outside that has little connect with the people of Bengal or their sentiments.

The BJP’s attempt at thrusting Hindi across the country and repeated assertions that they would carry out an NRC-like exercise, sources close to Mamata think, have given her an opportunity to use the Bengali identity card against the saffron camp’s “divisive politics”.

Though the battle for Bengal is still around one and a half years away and Mamata is hardly in poll mode, there is little doubt that she is preparing to use the Bengali identity as her main poll plank for the next Assembly polls.

“Some fanatics who are unaware of Bengal’s culture had vandalised Vidyasagar’s bust… But breaking a bust into pieces cannot wipe Vidyasagar from our hearts,” said Mamata, who visited his birthplace, garlanded his statue and took a round of the museum dedicated to him.

Later, at the programme at the school that Vidyasagar had set up as a gift to his mother, Mamata spoke at length about the contribution of Bengal to India’s freedom struggle and the role prominent Bengalis had played in reforming

Indian society. In her 35-minute address, she reminded the audience that Bengali tradition was all about inclusiveness.

“Gandhiji was born in Porbandar in Gujarat… But he is so respected in Bengal. People of Bengal have him in their hearts. We know and love all our national heroes, be it Maulana Azad or B.R. Ambedkar,” said Mamata, who tried to stress the tradition of plurality in Indian society.

Sources close to the chief minister said that she underscored this point — and registered her protest on the BJP’s one nation, one language theory — to nudge the members of the Bengali civil society to raise the voices against the saffron plan in a manner their counterparts in the southern states have.