Advertisement
Home / India / UP polls: Narendra Modi claims some of his rivals want him dead

UP polls: Narendra Modi claims some of his rivals want him dead

Akhilesh Yadav, Samajwadi Party president and the BJP’s biggest challenger, had several weeks ago said that people visit Varanasi during their last days 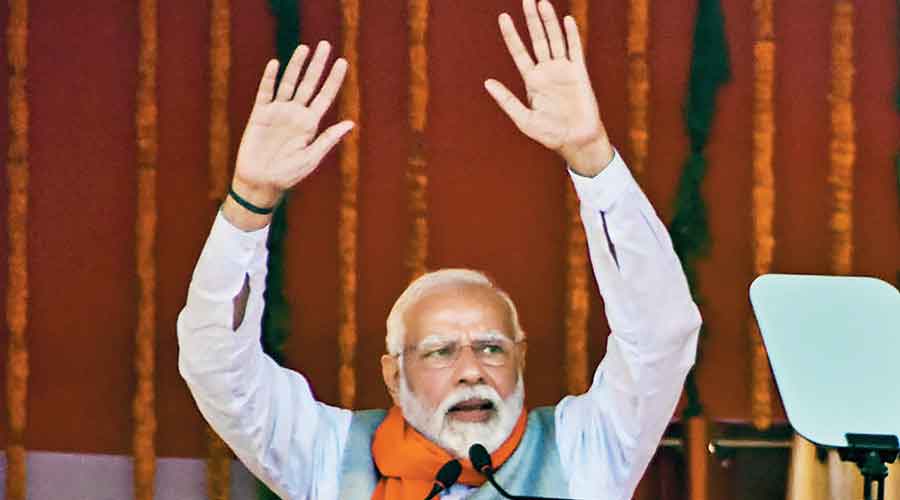 Prime Minister Narendra Modi on Sunday claimed that some of his rivals wished his death, raising the emotive pitch of his campaign in his parliamentary constituency of Varanasi and claiming he would be glad to die in the holy city.

“I was elated when they wished publicly for my death. This means that neither Kashi (Varanasi) nor its people will abandon me till my death,” Modi told a meeting of local booth-level BJP workers in Varanasi city.

“What can be a bigger stroke of luck for me than dying in Kashi while working here?”

Modi mentioned no names. Akhilesh Yadav, Samajwadi Party president and the BJP’s biggest challenger, had several weeks ago said that people visit Varanasi during their last days. He had not named anybody, either.

An angry BJP had at the time accused Akhilesh of praying for Modi’s death. The Samajwadi president had denied the charge and clarified that he had referred to the BJP government’s last days in the state.

Modi exhorted the over 20,000 booth-level workers to visit every voter in Varanasi. He fervently sought their support as though he was addressing general voters.

“I can’t reach every resident of Kashi. Will you go to each of house of Kashi and deliver my greetings?” he asked. “Will you go and say that Modiji couldn’t come but he has sent his pranam (greeting)?”

Observers saw the fervent effort to enthuse party cadres as a consequence of low voter turnouts in the first four phases of voting, amid reports of a lack of enthusiasm among BJP workers too. (Sunday witnessed the fifth phase.)

Eastern Uttar Pradesh, where the last two phases of polling are scheduled on March 3 and 7, has traditionally been a weak area for the BJP. Party leaders, who fear a close contest, feel they need to pull up their socks before the last rounds.

Modi is scheduled to camp in Varanasi from March 3 to 5 and campaign extensively in an all-out push.

On Sunday, the Prime Minister accused the Samajwadis of standing by terrorists.

“Bomb blasts used to take place on the ghats and temples of Kashi. The terrorists feared none because the Samajwadi government of the day was with them,” he said.

“The government was withdrawing cases against the terrorists. But could their design succeed before Baba Kal Bhairav?”

Several blasts had occurred in Varanasi in March 2006, when Akhilesh’s father Mulayam Singh Yadav was chief minister, killing 28 people. Varanasi has a temple to Kal Bhairav, a manifestation of Shiva.

Roads across Varanasi city were cordoned off and an army of sweepers was deployed on them on Sunday afternoon as part of preparations for Modi’s visit. The Prime Minister arrived at the auditorium of the Sampurnanand Sanskrit University, the meeting venue, in an open electric cart.

Earlier in the day, Modi had told a rally in Deoria that this Assembly election in Uttar Pradesh was a contest between “parivarvadis (political dynasts)” – a term he uses to attack Akhilesh and the Nehru-Gandhis – and “rashtrabhakton (patriots)”.

While the Opposition has largely refrained from attacking the state government over the horrors of the Covid second wave last summer, when bodies were dumped in the Ganga or buried in shallow graves on riverbanks, Modi accused the BJP’s rivals of inaction during the crisis.

“Instead of helping you, these parivarvadis tried to scare you, make you anxious and didn’t lag behind in deepening the crisis,” he said.

On Sunday morning, Akhilesh had told a rally in Kushinagar that popular anger against the BJP had prompted members of the ruling party to remove BJP flags from their homes and cars.

Around noon, Modi claimed in Deoria that Dalits, OBCs and upper caste voters were all voting for the BJP and its allies, Apna Dal and the Nishad Party, in the fifth phase. Some 61 seats in central and eastern Uttar Pradesh — including Amethi, Sultanpur, Allahabad and Chitrakoot — voted on Sunday.

Deoria and Varanasi will vote on March 3 and 7, respectively.