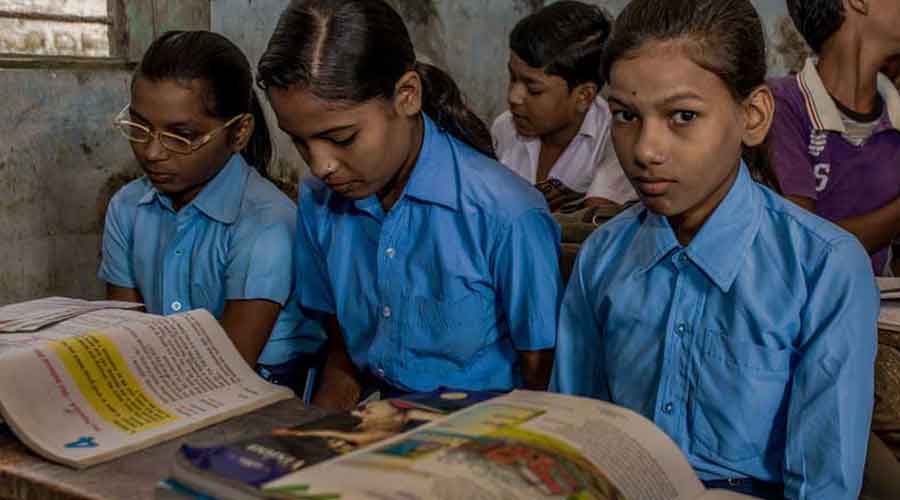 With the pandemic closing physical classrooms two years ago, most of the schools have been distributing the dry rations among the families and transferring the cooking cost to the parents’ accounts.
File photo
Basant Kumar Mohanty   |   New Delhi   |   Published 02.02.22, 03:08 AM

Poonam Kumari from Chhapra village in Bihar’s Rohtas district had a question on Tuesday: Does the Union government care about the education of poor girls?

The budget proposals for 2022-23 include no allocation for the National Scheme for Incentive to Girl Child for Secondary Education (NSIGSE), which was started in 2008-09 to promote the enrolment of Scheduled Caste and Scheduled Tribe girls in secondary schools and reduce the dropout rate among them. Another objective was to reduce underage marriage.

An education ministry official said the scheme had now been discontinued.

Beena Pallical, secretary of the NGO National Campaign for Dalit Human Rights, said Dalit and tribal girls were among the worst victims of the pandemic’s fallout, and the government had “discontinued the scheme just when the children needed it the most”.

Under the NSIGE, a fixed deposit of Rs 3,000 was made in the name of each beneficiary on her enrolment in Class IX. The girl was entitled to withdraw the sum along with the interest after turning 18 provided she had cleared Class X and was unmarried.

Last year’s budget proposals had allocated Rs 1 crore for the scheme but this was reduced to zero in the revised budget, meaning no money was actually spent on the scheme.

“The scheme should not have been abandoned. Rather, it should have been revised to include poor girls from all sections of society, and extended to cover higher education,” Poonam, a first-year BA student, said.

Archana Kumari, another first-year BA student from the same village, said the Centre’s abandonment of the scheme ran counter to its slogan of Beti Bachao Beti Padhao (Save and educate the girl child).

“It’s not easy for poor girls to pursue their education in rural areas. They should be provided with scholarships if the government is serious about Beti Bachao Beto Padhao,” Archana said.

Before the budget, the department of school education and literacy had asked the government-funded Institute of Economic Growth (IEG) to evaluate the scheme. The IEG study advised against the continuation of the scheme.

It said the scheme’s implementation had remained erratic because of a lack of coordination among the Centre, states and school administrations and an absence of monitoring.

It also found that most students and teachers were unaware of the scheme’s existence and that the schools were often uninterested in uploading the eligible students’ data on the online portal, or struggled to do so because of poor connectivity.

The IEG said that under-18 marriages had fallen anyway, reducing the scheme’s relevance, and that a small sum like Rs 3,000 was no deterrent to the practice. It further said the scheme was discriminatory since it benefited only Scheduled Caste and Scheduled Tribe girls.

Pallical said: “Many children, particularly from the SC and ST communities, have developed learning gaps because they lack access to gadgets for online education. The government should have increased the incentive to help them procure mobile phones and learning material.”

Under the scheme, every student of Class I to Class VIII in every government or aided school is entitled to a cooked meal on the days the school is open. With the pandemic closing physical classrooms two years ago, most of the schools have been distributing the dry rations among the families and transferring the cooking cost to the parents’ accounts.

However, several states like Maharashtra, Madhya Pradesh, Jharkhand, Telangana and Rajasthan reopened physical classes in schools from Tuesday. Other states are expected to do so too.

“In the last two years, most parents have used the midday meal money for other family expenses. The children have largely been deprived of the extra nutritional support,” said Sumeet Panda, co-convenor, Odisha Khadya Adhikar Abhiyan, an organisation working for food security.

“The government should have increased the cooking cost and given some breakfast too. Instead, it has reduced the amount from last year’s allocation.”

The Economic Survey for 2021-22, tabled in Parliament on Monday, had recommended increasing the expenditure on public schooling since many children from private schools had switched to government schools following a decline in families’ incomes over the past two years.

Finance minister Nirmala Sitharaman announced that the number of government educational channels would increase from the current 12 to 200.

The Right to Education Forum, an organisation working for access to and the quality of school education, expressed disappointment.

“A Unicef report suggests that 42 per cent of children between 6-13 years reported not using any type of remote learning during school closures. However, the finance minister in her speech, while acknowledging the learning loss, mentioned that e-Vidya programme will be expanded to 200 channels,” it said in a statement.

“With more focus on digital learning, with no real allocations on expansion of digital infrastructure implies that the government is thinking of private investments and PPP to push digital education.”

The allocation for higher education has been increased from Rs 38,350.65 crore to Rs 40,828.35 crore. A digital university will be opened, Sitharaman said.

More time to set up start-ups for sops