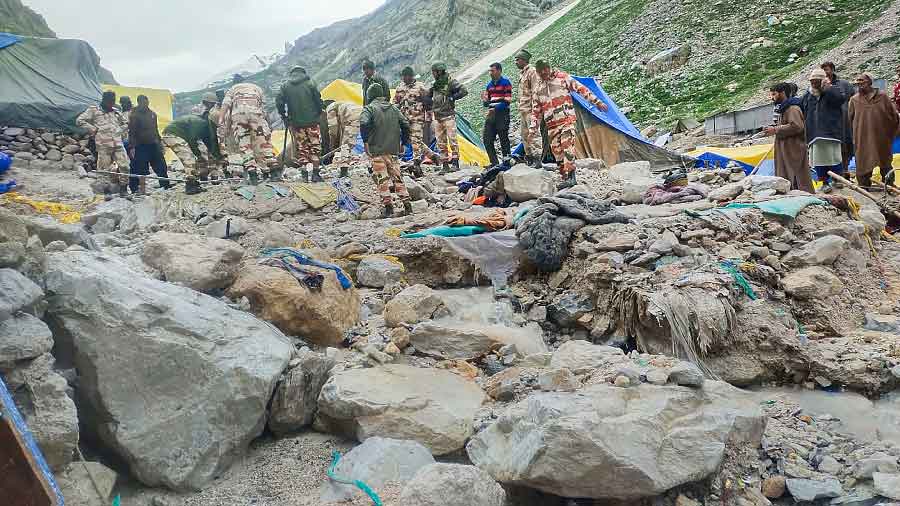 Undeterred by the deadly flash floods that have claimed at least 16 lives at Baltal, devotees thronged the Amarnath Yatra base camp in Jammu on Saturday with a "high degree of enthusiasm and devotion" for their onward journey to the cave shrine situated at a height of 3,880 metres in the south Kashmir Himalayas.

Expressing grief over the tragedy that occurred on Friday, the pilgrims said they have no fear as they have full faith in Lord Shiva, adding that it would be a great privilege for them if they die in the abode of the god.

The 43-day annual pilgrimage started on June 30 from the twin routes -- the traditional 48-km route from Nunwan in Pahalgam in south Kashmir's Anantnag and the 14-km shorter but steep Baltal route in Ganderbal district of central Kashmir.

Over one lakh pilgrims have paid obeisance at the cave shrine as the yatra is scheduled to end on August 11 on the occasion of Raksha Bandhan.

"We reached Jammu on Saturday. We have no fear. We have come here taking the name of Lord Shiva. If the god takes our lives here, we will accept it. But we have come to have darshan of Bholenath and nothing can stop us from doing that," Anantajit, who has come along with his wife and two children from Tripura, said.

Pointing out that those who have been born will also have to die one day, he said, "If the death occurs in the abode of Shiva, it would be the most pious thing to happen to anyone."

Chanting "Bam Bam Bhole", "Har Har Mahadev" and "Bholenath Ki Jai", a group of 60 enthusiastic pilgrims from Rajkot in Gujrat entered the Bhagwati Nagar base camp here for their onward journey to the twin base camps of Pahalgam and Baltal on Sunday.

"We have no fear in our hearts and minds. Whether there is a cloudburst or flash floods, we will go to Amarnath with the blessings of Bholenath. We are enthusiastic to have darshan of the ice lingam as we could not visit the shrine in the last two years due to COVID-19," Surinder Singh of Kanpur said.

Over 6,000 pilgrims have arrived in Jammu from various parts of the country for their journey to Kashmir to pay obeisance at the cave shrine. A heavy rush was seen at the registration counters, token centres and lodging centres, apart from the base camp in Jammu.

The shrine houses an ice stalagmite structure called the "lingam" that wanes and waxes with the phases of the moon. Devotees believe that the "lingam" symbolises the mythical powers of Shiva.

The flash floods triggered by heavy rains have failed to alter the religious fervour and devotional mood in Jammu, officials said.

"Pilgrims devoid of fear and with high enthusiasm are coming in hundreds. There has been no fall in pilgrim arrivals," an official said.

Over 3.42 lakh pilgrims had paid obeisance at the shrine from July 1 to August 1, 2019, before the Centre cancelled the pilgrimage midway, ahead of the abrogation of Article 370 of the Constitution and the bifurcation of the erstwhile state of Jammu and Kashmir into Union territories.

At least 16 people have been killed while 15,000 pilgrims, who were stranded near the holy cave due to the flash floods, have been shifted to the lower base camp of Panjtarni, officials said.

A massive operation is on to trace the missing people.