Tractor rally returnees ‘beaten’ in UP

Police officers denied any brutality, saying it was a simple exercise to clear the Delhi-Saharanpur highway 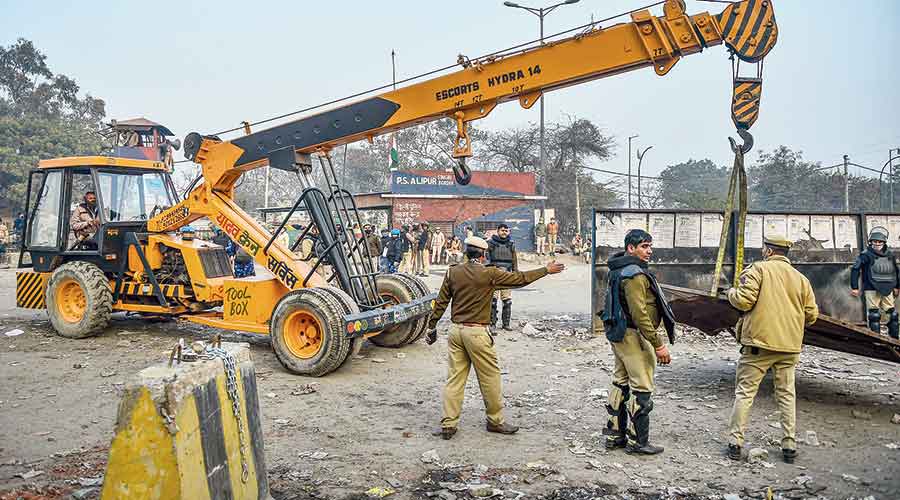 Police personnel ramp up security arrangements near the site of the farmers’ agitation at the Singhu border.
(PTI)
Piyush Srivastava   |   Lucknow   |   Published 29.01.21, 03:29 AM

Police evicted 8,000 to 9,000 protesting farmers from a roadside venue some 100km from Delhi in a late night operation on Wednesday, allegedly baton-charging them brutally, damaging their tents and leaving many injured.

The farmers at the site in Baghpat district — most of whom had just returned from Tuesday’s tractor rally in Delhi and would have left for their homes on Thursday — said the police took away all their belongings in trucks.

Police officers denied any brutality, saying it was a simple exercise to clear the Delhi-Saharanpur highway.

The farmers said they had been on a dharna against the three new farm laws for the past 40 days on a tract of fallow farmland about 10 metres from the highway, and had never blocked the road.

Farmers at the Ghazipur border on Thursday night.
(PTI)

Police personnel ramp up security arrangements near the site of the farmers’ agitation at the Singhu border.
(PTI)

The protest site in the Baraut area of Baghpat has been a transit point for farmers heading to or returning from the protest site at the Ghazipur border with Delhi. Its occupancy fluctuated between 20,000 and 8,000, with some sleeping in the 30-odd tents pitched there and the rest in the open. All the arrangements had been made by local khap panchayats.

“Police officers had since Wednesday morning been trying to persuade us to leave. Just after 11pm, some 500 police and Provincial Armed Constabulary personnel arrived in trucks and brutally lathi-charged us. Many farmers have been admitted to hospital,” Chaudhary Surendra Singh, a farmer leader, said.

He said that most of the farmers present had just returned from Delhi and were tired. “Most of us were asleep and didn’t realise what was happening. We started running helter-skelter. They tore our tents, scattered the food and took away our blankets, clothes, hookahs and other belongings,” Singh said.

Baghpat additional district magistrate Amit Kumar Singh said: “We removed the farmers from the national highway peacefully. The National Highway Authority of India had written to the government saying the farmers’ protest was hampering its functioning.”

The protesting farmers said Baghpat had sent the highest number of participants from Uttar Pradesh to Tuesday’s tractor parade in Delhi.

“Baghpat is a stronghold of Chaudhary Ajit Singh’s RLD and Rakesh Tikait’s Bharatiya Kisan Union. Ajit Singh had asked his workers to support the farmers’ protest, and the BKU has been active in the protests at Delhi’s borders since the beginning,” said Mahendra Pal, a farmer.

The leader of the Opposition in the Uttar Pradesh Assembly, Ram Govind Chaudhary of the Samajwadi Party, on Thursday said instead of farmers, an FIR should be registered against the Delhi police commissioner and top BJP leaders for the violence in New Delhi on Republic Day.